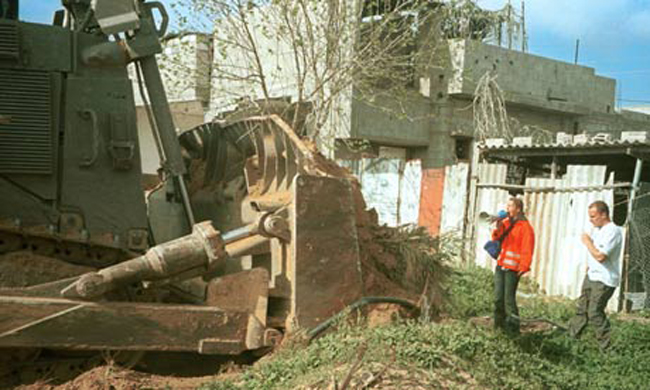 Rachel Corrie confronting an Israeli army bulldozer before being killed by it (March 13, 2003)

Léopold Lambert – Paris on April 14, 2015
If you enjoy articles of the blog, have a look at The Funambulist Magazine!

A few months ago, I learned that Judith Butler was going to give a lecture at the London School of Economics and Political Science about the notion of human shields. Butler’s choice for this notion is very likely to have been motivated by its systematic use by the Israeli army during last dreadful summer to justify the two thousand civilians it kills in Gaza, both through bombing and terrestrial invasion. I enthusiastically discovered yesterday that the video of the lecture (that occurred on February 4, 2015) was now available online (see below) and undertook to watch it (twice!). Although Gaza inhabitants are at the core of Butler’s intervention’s first half, she then attempts to articulate a parallel with the numerous killing of unarmed black men and women by white police officers in the United States, thus exiting the legal notion of human shield to prefer the (admittedly fascinating) process by which a body looses a status of civilian, or rather acquires a status of threat within a racist fantasy that proves to be fatal when its author is an armed body, if not a police officer. Feeling that the notion of human shields had then been forgotten from her argument, I felt the urge to go back to it, in order to try making some sense — however minor — out of it.

Butler argues that the only rationale in which a human body/life can be understood as embodying a certain degree of militarization in just being where it is, is an economic rationale: what we could call “economization of life,” following Michelle Murphy (see our conversation in Archipelago). Such a positioning of one body, whether voluntary or not, is based on a what Butler calls a calculation of cost/benefits since the act of putting a body on the line can be necessarily considered as a cost in the extreme fragility and precariousness it constitutes, as Banu Bargu (quoted several times in the lecture) illustrates in her brilliant work about human shields. Nevertheless, Butler notes that “when we speak about voluntary and involuntary human shields, we are from the start talking about designations that take place in language, and for specific reasons: these are discursive formations that are already mobilized in the service of a war effort or in the midst of a war field.”

This last quote helps us to understand that the notion of human shield constitutes one of this locutions that envelops the body (see past article), often in a retrospective fashion in place of a legal debate. What it also suggests is that if bodies are on the targeting line, only the legitimacy of their position and, thus, of their capacity to extend the target, is debatable: the target itself is not in question. The case of Rachel Corrie, quoted both by Bargu and Butler, is illustrative of such an interpretation that can only favor the attacker ultimately, since only what it calls “collateral damage” finds itself… on the line of debate. On March 13, 2003, Corrie, a 23-year old American activist was crushed and killed by an Israeli army bulldozer in its attempted destruction of a Palestinian house in Rafah. The debate and lawsuit that followed, despite the fact that they could not possibly be considered as illegitimate, only questioned the death of Corrie — the trial eventually ruled for the accident interpretation — without challenging that against which she put her body in the targeting line.

Here lies the problematic aspect of the way we consider the notion of human shields. The attribution or not of such a legal status seems to remain indissoluble to the degree of innocence a body or a population might embody. In a time when communication became a fundamental war instrument — for Western armies, but not only, as we can see with the strategy of an armed force like ISIL — innocence and non-innocence can be dramatically manufactured to legitimize the war effort. Using only two instances, we can see how Gaza inhabitants “are not innocent” so they can be bombed, while the Iraqi Christian militias “are innocent” so their attackers can be bombed. During last summer’s Israeli siege on Gaza, I tried to argue that this term was at the center of the discursive problem that can only legitimize the killing of Palestinians by what it implies. The reason for it can be found in our apparently inescapable need for figures of innocence. In the case of Gaza, the figure of the child was universally recognized as embody such innocence. The problem of constructing a figure of innocence is that a body’s innocence will be proportionally lesser to its degree of difference with this figure: In other words, an 8-year old girl is innocent, a 35-year old man is far from looking like a 8-year old girl, therefore this man is far from being innocent. I had then tried to articulate the idea that, on the one hand, we could affirm that all Gaza inhabitants were to be considered innocent by the Israeli army during this siege, since none of them could be proved guilty through due legal process; on the other hand however, we might favor a discourse insisting that none of them was innocent (in the sense that we usually attribute to a child as long as (s)he is ‘protected from the world’), since not a single one of these bodies was not deeply affected by the military conditions in which they have no choice but to live: even a baby’s milk is necessarily influenced by either the Israeli blockade or the contraband circuit. In this sense, no body in Gaza has the luxury of innocence.

Going back to the notion of human shields, we should keep in mind this impossibility of innocence in such situations — and despite embodying lesser degrees in others, we can apply it to all situations — and refuse this debate, in order to favor the question of the legitimacy of political struggles. In the case of Corrie, it is clear where a debate about innocence would bring us: we would argue that her white female body, filed administratively as American citizen, was necessarily innocent, thus perpetuating the idea that non-white, non-female and non-Americans would be as much separated from innocence that they would be separated from these characteristics. Corrie was not innocent: she flew to Gaza to put her body on the targeting line and died probably knowing that she would if her body remained on it. There would be a lot to say about the idea of dying to embody a political manifesto, and we would be jumping hastly to conclusions if we were to assume that such a position is, by definition, the absolute of political engagement; however, we can only recognize the dignity (i.e., the understanding of the gravity of a given situation while adopting a behavior appropriate to this gravity) that such posture embodies (see Edward Said’s text about Corrie, entitled “Of Dignity and Solidarity“).

Nevertheless, dignity is not exclusive to spectacular position on the targeting lines. Sometimes, it simply consist in living on this thick targeting line like the Gaza inhabitants do. If we understand this, we might see what constitutes the terrifying meaning of the Israeli army/government’s denomination of their bodies as “human shields”: knowing that the Palestinians cannot escape from being on their targeting line, they would simply consider them as innocent if they accepted ceasing to live. Their existence is, in itself, resistance.