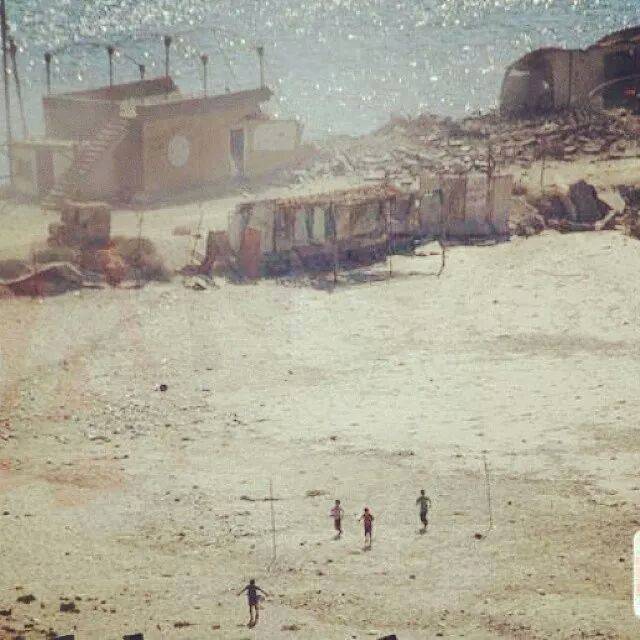 Léopold Lambert – New York on July 21, 2014.
If you enjoy articles of the blog, have a look at The Funambulist Magazine!

The photograph above was taken on Wednesday, July 16, 2014, only a few seconds (if not fractions of seconds) before the four Palestinian children were killed by an Israeli navy shell directed at them. For many of us, this murderous event culminates as the paradigm of the Israeli army’s war crimes in the on-going siege on Gaza. These four children are part of the 111 who got killed by the Israeli army these last two weeks according to today’s OCHA report. The assassination of children, whether deliberate or not, appears as absolutely unacceptable and touches us all deeply. I certainly do not want to argue the opposite. Yet, I would like to make us think about the fact that this massacre is far from being the first one in history against Palestinian children and the fact that they seem to repeat in all impunity would tend to tell us that we are arguing against it using a wrong way.

Let’s consider a hypothetic scenario: if we were offered the choice of saving every children of Gaza in exchange of the perpetuation of the siege, wouldn’t we all accept it? Here lies the fundamental problem of looking for innocence, it drives us to ask the questions that legitimize that against what they think they are fighting. Let’s consider this hypothetical choice again: what lies behind it is a transfer of responsibility. If you refuse it, you will become responsible for the death of children. This is what happened following the murder of the four children described above: both Israel and the United States, regretted that children had to die but imputed the blame to Hamas for not having signed the (unilaterally designed) ceasefire the day before. “Hamas could have saved Gaza’s children but refused to do so” is the explicit rhetoric that comes out from the affirmation of this choice. Much of the Western press saw it this way and perpetuated the narrative of symmetry that has allowed the occupation to exist until now. The choice is however crooked in its very essence: the responsibility cannot be legitimately transferred. Despite its rhetoric, Israel does have the choice of whether or not continuing the bombing and raid on Gaza; the idea that it would have not such a choice, and therefore such a responsibility — invited by the title of the NY Times about the four murdered kids, “Boys Drawn to Gaza Beach, and Into Center of Mideast Strife,” for example — brings us back to the absurd Kubrickian narratives of Doctor Strangelove and his “doomsday device.”

The figure of innocence is therefore useful in a strategy of perpetuation of the occupation. Let’s try to examine this concept through its two meanings. The first one intervenes in the judiciary realm. In this context, one is said to be innocent as long as s/he has not been proven guilty through a proper judicial procedure. According to this definition, all of the 448 killed and 3,008 wounded in the Gaza strip during these last two weeks can be said to be innocent: children, civilians and people suspected to be involved in launching rockets towards Israeli towns alike. Within this definition of innocence and in the absence of any judiciary procedure, all in Gaza are innocent to the same degree.

Considering the second definition of innocence is also useful. This second understanding of innocence is profoundly linked to the idea of childhood. We say of a child that s/he is innocent in the sense that s/he can have an uncorrupted mode of existence in the world. This is what make us so angry when we see these horrifying photographs of murdered children in the streets or beaches of Gaza. The passage from childhood to teenage or adulthood is characterized by the loss of this innocence. By definition, the ‘corruption’ of the child can only come from causes that are external to her/him. In this sense, nobody in Gaza can be said to still be innocent: the hospitals where children of Gaza are born depend on the will of the Israeli army for their construction, electricity, supplies and general functioning (i.e. whether it is being bombed like they currently are). This dependence renders any innocence impossible since being born during a bombing, a power outage, and/or an overpopulated hospital can only have consequences on the newborn baby. Similarly, the milk drunk by this same baby has either been imported from Israel according to unilateral conditions, or smuggled from Egypt, in both cases influenced by the military blockade. Examples are plethora. The ‘corruption’ by external causes is therefore at work from the very beginning of the people of Gaza’s life to their very end (end that can be determined militarily as we are powerlessly seeing right now). Because the loss of this innocence can only occur through external causes, the perpetrators of these causes — in this case, the Israeli government and army — are to be judged responsible for these ‘stolen childhoods.’

As counter-intuitive as it might seems, we should therefore refrain from distinguishing figures of innocence in our struggle against the militarized agency (that includes the bombings and sieges) of Palestine. Distinguishing equals excluding: if some figures like children are said to be innocent, the corollary consists in affirming that others might not be (or might be less) innocent. Once we have established the language that allows us to say that all Palestinians in Gaza are judiciary innocent (until being proven guilty by a legitimate court), and that none of them are innocent (as children should have the right to be) because of this militarized agency, we can see the Israeli action for what it is: state-organized terrorism motivated by ethnic criteria. This strategy is based on the knowledge that Zionism in its violent exclusivity has everything to loose from the cessation of antagonism in Palestine, between Palestinians themselves (cf: the recent re-union of Hamas with the Palestinian authority), but also between the Israeli and Palestinian populations as well.