Léopold Lambert – Paris on November 27, 2016
If you enjoy articles of the blog, have a look at The Funambulist Magazine!

During the last week of November, about 60,000 people had to flee from their homes in Haifa as forest fires reached the city’s outskirts. With the help of firefighting crews from several countries (including four Palestinian ones), Israeli firefighters finally gained control of the fires eight days after they began. During the same week, about a dozen smaller fires started in forests across the country, recalling to a lesser degree the situation in 2010, when a massive wildfire consumed Mount Carmel (South of Haifa) and killed 44 people. Members of the Israeli government, including Prime Minister Benjamin Netanyahu, were quick to accuse Palestinians living in Israel (citizens deprived of the recognition of their Palestinian-ness, instead being called “Israeli Arabs” by officials) of triggering these fires, and promised severe punishment for the supposed arsonists, describing their actions as “new forms of terrorism” and suggesting stripping the accused of their citizenship and destroying their family homes (for more on the collective punishment that home demolitions constitute, see the article dedicated to it in The Funambulist Magazine, Issue 8: Police). The fact that the Israeli government systematically blames Palestinians for every problem of Israeli society, in particular when it is accused of severe unpreparedness, should not surprise us. This article does not even intend to debunk these accusations but, rather focuses on denying Israel’s forests the status of natural innocence that the Zionist narrative pretends that they embody.

(below) Jewish National Fund money-collecting blue boxes: before 1948 to buy land in Palestine, after 1948 to grow forests in Israel.

As described in a previous article entitled “Make the Desert Bloom: Manufacturing the Israeli Territory/Narrative,” in order to understand the political role of Israel’s forests, one must study the history of the organization in charge of planting and maintaining them: the Jewish National Fund (JNF). It is a non-governmental organization controlled by the World Zionist Organization that, from the beginning of the 20th century until the creation of the Israeli state in 1948, had been collecting money (thanks to the famous little blue money boxes) within the worldwide Jewish diaspora in order to buy as many parcels of land as possible from Palestinian farmers and landowners. In the final three months of the British Mandate for Palestine, various Zionist paramilitary groups besieged Palestinian villages, subsequently evicting and destroying them. This process of systematic and massive dispossession, displacement, and destruction continued after May 1948 during the war that would allegedly legitimize the creation of the State of Israel on a large part of Palestine. 800,000 Palestinians (about half of the Palestinian population at the time) thus became refugees in Lebanon, Syria, Jordan, the West Bank, and the Gaza Strip without any hope of returning to their villages and towns. As described in the past in this magazine, the strategy of Israel’s ensuing government to manufacture a national narrative that elides the massive and systematic violence that the Nakba actually constituted consisted in minimizing and concealing the past presence of the Palestinian people on the land claimed by the State of Israel. The ruins of the evicted and destroyed Palestinian villages were thus demolished in the 1950s, and in some instances, forests were planted by the JNF where they used to be (like in Lubya, as showed in the film The Village under the Forest by Mark J Kaplan and Heidi Grunebaum). The double story that a surviving ruin, by definition, is able to unfold (both in the assertion of its past existence and the marks of its slow or accelerated destruction) has thus been denied to the Palestinian narrative, adding an additional layer of violence to the Zionist enterprise of dispossession.

(above) Ruin remains of the villages of Bayyarat Hannun (left) and Yibna (right) / Excerpts of the book Les Absents (2016) by Bruno Fert.
(below) JNF’s largest forest, Birya before (1953) and after its plantation (2008)

Concealing the last remains of Palestinian ruins and, through them, the narrative they carried, was however not the only political aim of these newly-grown forests. One of the important reasons that some of Israel’s forests are burning of late is that these forests are composed of pine trees, well known for their high degree of flammability, especially in a very dry environment like the climate of Palestine provides. The reason this type of tree was planted, rather than a more endemic species, is because of the role of the Ashkenazim in defining the Zionist imaginary over other Jewish ethnic groups (Sephardi, Mizrahi, Ethiopians, etc.). The implementation of pine trees in Israel provides a visual representation of the Israeli claim of “exceptionalism” in the region, and was meant to make the land appear as an extension of Europe (the Swiss mountains are often cited as an example) in a geographical context that 19th-century orientalists mostly described as arid and deserted — Palestine was more often characterized by its southern desert than through its northern continuity with the fertile lands of Lebanon and the Golan Heights. Moreover, settler colonialism has yet to find a better way of asserting and implementing itself than through its usual operations of geoengineering, claiming land by imposing control on it. 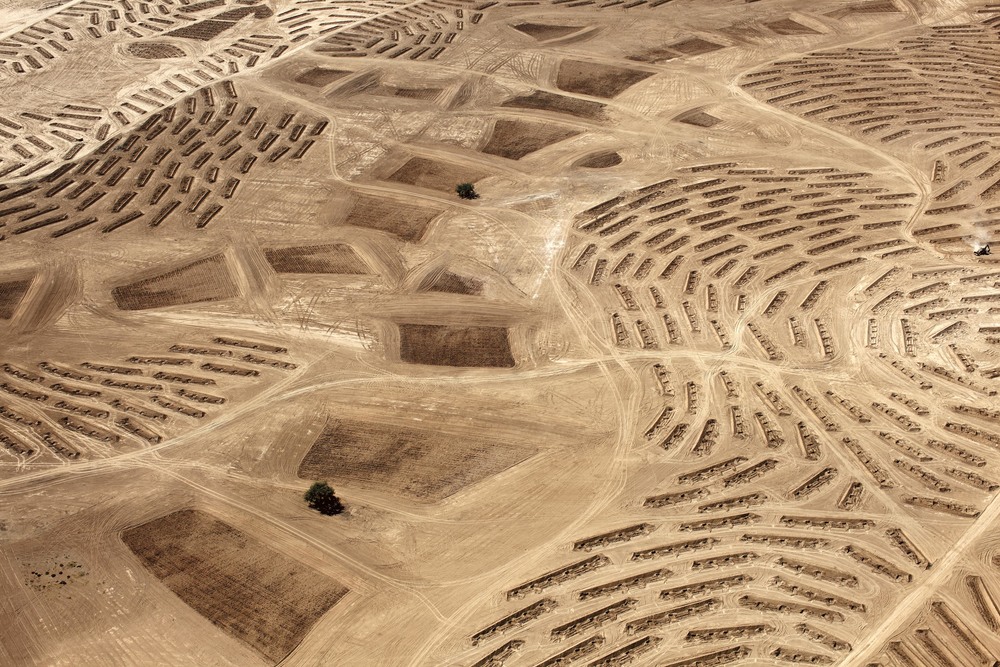 (above) JNF “Tree Center” website inciting the Jewish diaspora to fund the planting of a tree for various occasions.
(below) The aforestation of the Negev desert: the Zionist imaginary of “making the desert bloom” at work / Excerpt of The Erasure Trilogy (2015) by photographer Fazal Sheikh

Whether some Palestinians actually contributed to the recent fires as prooflessly alleged — and couldn’t such acts arguably be seen as a form of non-violent resistance, as the Palestinians are hypocritically encouraged to undertake by Western nations? — or they were instead the ghosts of the Nakba, as Karim Kattan suggests in his forthcoming novel, the fires in Israel’s forests cannot be read in the typical apolitical understanding of natural disasters (the further question being, do ‘natural’ disasters still happen anywhere?), but rather through the prism of Palestine’s political history. In this regard, it is hard not to appreciate the symbolism of olive trees growing in the dead trunks of pine trees unfit for the climate in which they were forced to grow, as Israeli historian Ilan Pappé describes in The Ethnic Cleansing of Palestine (Oneworld, 2006). Through this specific symbol and the fires, we should perhaps refrain (however tempting it might be) from imagining a natural order that refuses to leave operations that challenge it unpunished, and rather think that the depoliticization of what these phenomena represent fundamentally reinforces the dominant narrative. If we are to accept the newly-defined paradigm of the so-called “anthropocene” (regardless of the ironic anthropocentrism and chronocentrism it constitutes), we need to refuse to be moralistic ‘tree-huggers’ captivated by the conventional forms of ‘nature’ at the expense of the political histories that bring them into existence. As always, when it comes to thinking of the future of Palestine, we should refrain from nostalgia, and in so doing, we should not make the mistake of thinking that burning all the forests planted by the JNF and thus going back to the supposedly ‘original’ flora would end the Apartheid implemented through the Zionist project. However, when we see a pine tree burning in Israel, we can certainly distinguish a tiny part of this project burning through it. What we will construct with the ashes is up to us.