Léopold Lambert – Paris on September 8, 2015
If you enjoy articles of the blog, have a look at The Funambulist Magazine!

This article and map are in the continuity of the five others made in the past year (cf. “The Banlieue Archipelago,” “Another Paris,” and “15-minute walk from a train station” maps) and, more generally, to the on-going series of articles about the Paris banlieues (updated map in 2017 at the end of this article).

On October 26, 2005, recently re-nominated Minister of Interior Affairs (i.e. chief of the police), Nicolas Sarkozy, who will be elected President two years later, was visiting the banlieue of Argenteuil when he addressed a person at her window: “You’re tired of this scum [racaille], aren’t you? Well, we’re going to get rid of it for you!” (see video). The next day, Bouna Traoré and Zyed Benna, two teenagers from Clichy-sous-Bois, died of electrocution while they were trying to run away from the BAC (Brigade Anti-Criminalité, i.e. a particularly aggressive branch of the police in the banlieues), chasing them illegitimately (see past article). These two events sparked the important revolts of the banlieues that were only responded with a state of emergency and more police control. Although Sarkozy’s policies and speeches have been consistently relying on fundamentally racist and colonial principles — many of uf will remember the 2010 speech of Grenoble about immigration or the 2007 one in Dakar about “Africa, not having yet entered history” — we can give him the benefit of the doubt that his definition of scum (racaille) consists in people despising the law and arrogantly disobeying it.

Let’s thus keep this definition in mind while introducing a piece of legislation that directly addresses the social (and by extension, racial) segregation that spatially organizes Paris and its banlieues: the SRU Law (Solidarity and Urban Renewal), voted in December 2000, obliges each municipality counting more than 3,500 inhabitants (1,500 in the Paris region) — other exemptions include the impossibility for a municipality to build more on its land — to comply with the ratio of 20% of its total housing to be social housing. The map presented above shows the quasi-totality of Paris’s urban area and its municipalities, including the 20 arrondissements that compose Paris proper. Municipalities showed in green are compliant with this legislation, and those in bright green even includes more than 25% of social housing — the 95 cités showed on the map in white are, of course, almost exclusively in these municipalities. On the contrary, the map shows no less than 149 municipalities that are not compliant with the law, including 60 that do not even reach a percentage of 10% (in red). For instance, Sarkozy’s city, Neuilly-sur-Seine — he was its mayor between 1983 and 2002 — counts less than 5% (1,435 out of 30,448) of social housing. Hence the question that gives its title to this article: “Who is the scum now?”

The difference between the people characterized by Sarkozy as scum, and these illegal municipalities is that the first ones tend to go to jail when judged guilty of the crimes of which they are accused; disobeying mayors, on the other hand, have to pay a fine, something that many seems to widely prefer rather than integrating a more important amount of socially precarious individuals and families as their constituents. In this regard, this failure of the means of coercion reminds us of the ones that are often applied to banks and corporations that can easily buy their right to despise the law. The result of such policies is the reinforcement of territorial segregation and the constitution of two blocks that were already visible in the map showing the wealth disparities of the city but the relation to this law render even more visible: some municipalities might be wealthier than others but part of them uses this wealth to buy their way out of their legal obligation. The wealth they accumulate while not providing the public service of aid to housing, as well as the production of real estate value generated from the non-mix of middle and upper class housing with social one, largely covers the fine, thus perpetuating the capitalist logic that makes the rich, richer, and the poor, poorer.

It ought to be noted that, although this article emphasized Sarkozy’s (and thus the French political right-wing’s) important responsibility in the application of this logic, a brief research of the illegal municipalities’ past and present mayors, show that he is far from being the only one to blame: in fact, several mayors members of the Socialist Party never complied with this law that was drafted by Lionel Jospin’s government (1997-2002). Similarly, the current Hollande/Valls administration (Socialist Party) did not engage any program of desegregation of the banlieues (in Paris or in other French cities), favoring instead policies whose differences with Sarkozy’s ones are to be found in the words more than in the actions. The current Minister of Housing and of Equality between Territories — an ambitious title, also far from having the means to reach such an ambition — Sylvia Pinel seems to be a marginal and powerless member of the government. At a time where the “Greater Paris” is being made, banlieue housing should be considered as absolute priority of any government and municipalities that, indeed, would like to promote this claimed equality of territories. The map above, on the other hand, show us another reality: ones that let illegal municipalities do as they will, while others are the direct victims of the resulting segregation. Although the two blocks showed on this map should be refined to include the local social segregation within each municipality, it reveals the obstinacy many mayors show when it comes to equality.

Addendum: In January 2013, an update of the law was voted that increases the minimum percentage of social housing to 25%. Municipalities have until 2025 to comply with this new requirement. 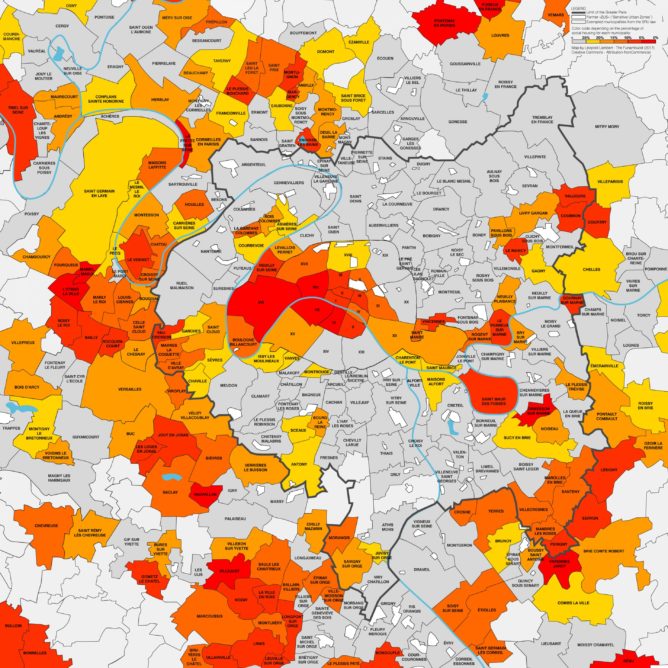