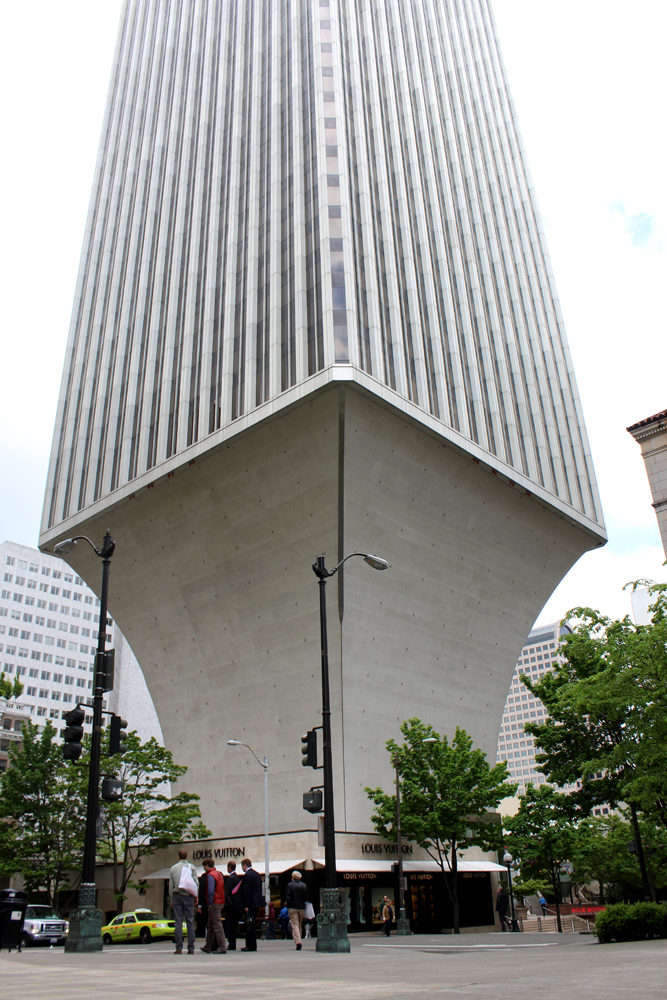 Regular readers of The Funambulist will have noticed that I have been often referring to the term fortress in order to describe pieces of architecture I recently encountered. This word refers to the defensive qualities that each of these architectures presents through its physicality in the way it “organizes bodies in space” (that is still my definition for architecture). However, it does not address the political agenda that is enacted through these defensive characteristics. What I have been calling “proletarian fortresses” in the last few years to describe Burail (Chandigarh), Rue Eugene Sue’s Haussmannian social housings (Paris), the Kowloon Walled City (Hong Kong) or the Torre David (Caracas) are the counterpoints to other fortresses, more deliberate and optimal, that capitalist-ideological logic construct everywhere. Whether we refer to the U.S./Mexico border wall, the wall that Israel built in the West Bank, the current Western embassies, this building encountered in San Francisco that acts a paradigm of the architecture of gentrification, the militarized public space of downtown Oakland, or the building that I want to describe in this article, they all impose the social violence of filtration between bodies who have access to both sides of their walls and bodies on whom the violence of architecture is fully operating.

The Rainier Tower in Seattle was designed by Minoru Yamasaki in the 1970s, only a few years after New York’s World Trade Center that did not wait for 2001 to embody the totem of American capitalist ideology. It was built for the Rainier National Bank for its headquarters. The Rainier Tower is particularly striking for its twelve first floors splaying from the top down into a fully opaque brutal concrete base (see photographs below). Such an engineering prowess associated to a radical aesthetics certainly put the first visitor (that I was two weeks ago) in awe. The well-known aesthetics of the office tower is recognizable for the floors above the 12th floor of the building, thus reinforcing the radicality of the basis in its contrast. To some degree, we might want to think of this tower as the representation of the capitalist ideological architecture: a transparent aspect for the inaccessible mirage and a defensive bunker for what should be its interactive base.

As usual however, I am not as much interested in a phenomenological approach when a body encounters architecture. The latter’s physicality is almost always more efficient in the transcendental strategy it unfolds. Questions are worth raising about what this concrete basis contains or have contained in the past. When I asked the security agent at the front desk, they refused to answer. Yet, ignoring something often leads to perilous hypotheses so I would rather not make any here. It is not so important to know whether this opaque concrete hides something — when looking at the floor plan, one can see that there is not much room outside the elevators and stairs — but it certainly is to observe what is the relationship that the building maintains with the street, i.e. the public realm. The tower makes more room to potential public space but, in fact, this space is still privatized through the shopping center that edges the building (on the other side, the shop visible on the photograph above is not part of the tower). The dialogue proposed to the street could not be more minimal. Each surface that could be considered as accessible is made of this opaque concrete up to where the capitalist ivory tower can begin. In a post September 2001 era, such base — ironically, like the one of the newly built World Trade Center in New York — could be seen as a militarized defense against potential bomb attack from the ground; however, we can more simply interpret this hermetic aspect as a reflex for capitalism to defend itself against the antagonism it knows it creates as well as to filter the bodies that are part of its manufactured social elite from the others; in short, its necessary impossibility — by definition — to be generous and to offer something to the public.

All following photographs are by Léopold Lambert (May 2014):