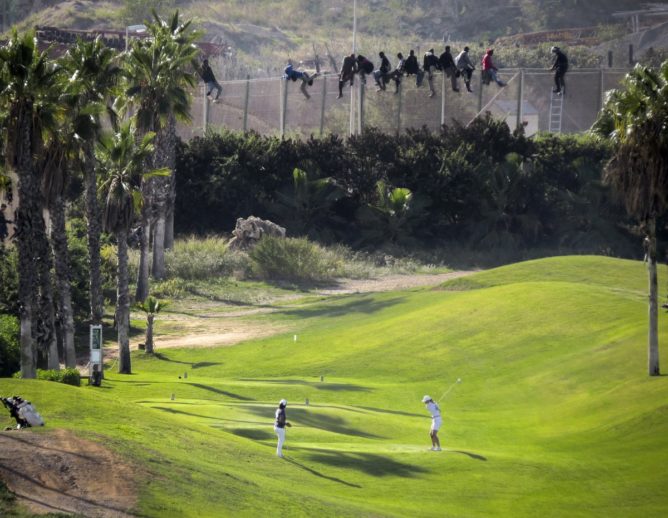 Making a photograph speak is a common journalistic exercise, yet it is a perilous one, since much of the image’s story remains unseen on it – the outside of the frame, the position of the photographer for instance. The photograph above, taken in the Spanish enclave of Melilla (North Morocco) on October 22, 2014, despite (or because) its striking symbolism, does not escape to the rule. The flattening of perspective we can see on it suggests that the photograph has been taken from a long distance of its subjects, with the help of a large range zoom. When attempting to situates it scene on google earth, we can realize that the wall separating the Moroccan and Spanish territory is not situated in the golf course itself, but actually slightly further on a road at its periphery. The visual encounter of the migrants climbing up the wall, the policeman, and the two golfers is therefore not as direct as it suggests. This photograph, like any other, constructs a vision that is to be slightly dissociated from a self-sustaining truth discourse.

When we associate it to a relative knowledge of the situation it attempts to recount, we can however start to use its symbolical power as a vessel of our arguments. What this image shows us is only a few of the many African migrants who regularly attempt to reach Melilla by climbing up its high wall, which materializes a part of the Southern border of what I called “Fortress North” in the past (when analyzing another part of this Southern border). The contrast between the urgency and the risk taken by these migrants and the comfortable casualness of the two Spanish golfers is striking. It is even more so, when we come to realize that the very principle of golf is to insure that only a limited amount of people is able to practice it. The price of golfing, like any other luxurious product, includes a part essentially dedicated to making it prohibitive to the largest amount of people. It is thus difficult not to make a parallel with the western world whose claimed “problem of immigration” might just well be that the golf course is becoming slightly too crowded to practice it comfortably.

This photograph’s depiction of a social contrast might however lead us to think that only a small part of the Western population is responsible for the systematic implementation of walls around the gigantic gated community where it lives. Many of us never played golf in our lives and would not necessarily identify with the golfers we see on the photograph. The legal responsibility for these walls can be admittedly attributed to their sole architects, and we could think of the definition of a crime by architecture in order to hold them to these responsibilities. However, the ethical responsibility for these walls is as much shared by their architects than by the rest of us, comfortably surrounded by them, who let more or less silently their violence operate at a daily level. This responsibility also includes the European working class. In its legitimate – who am I to even discuss it? – exhaustion from its daily struggles, part of it is accepting the easy and demagogic transfer of the cause of its problems from the ruthless function of capitalism to an even poorer population of migrants, who would supposedly “steal their jobs” – an economic absurdity when we come to think about it.

As I wrote in a previous article about the violence of the ‘primitive shelter,’ the walls we build always produce a status on both of its sides. We tend to think that walls only define the bodies who benefit from their protection, but they also simultaneously define the bodies who are excluded from it. Just like, the walls of the shelter produces the status of the homeless – sans-abri (shelterless) in French – the walls of surrounding our national territories are producing the status of the alien. This means that the political and social situations migrants of the world are fleeing would not exist as such if it was not for the logic that implemented colonization and, later, constructed these walls. The latter correspond to a globalized capitalist strategy that does not share its benefits with all populations involved – this could be the definition of a theft. The result, added to the effects of post-coloniality, consists in a strong economic and political precariousness that lead many to flee from it, in direction of the land of the sole benefiters of this system. This is the only “problem of immigration” that we should talk about, instead of insisting that our luxurious golf course constructed on the theft described above, is not getting too crowded.