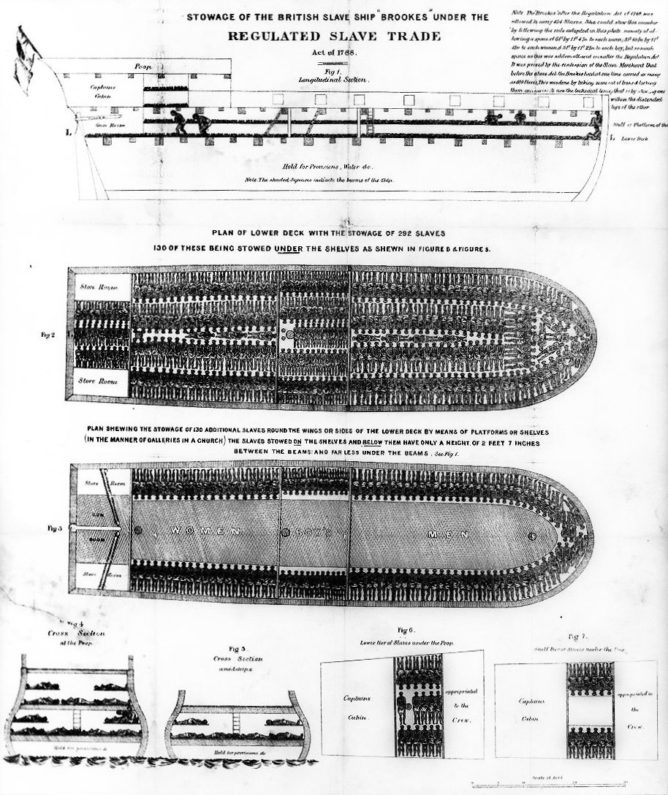 Stowage of the British slave ship Brookes under the regulated slave trade act of 1788. (Library of US Congress)

In the previous article, I was evoking the architecture of the holocaust’s gas chambers to address the role of design in industrialized death; today’s article will describe another atrocious historical example of how architecture can no only serve the most violent ideologies, but also often makes itself indispensable for them to be implemented. From the 15th century to the 19th century, about 14 million West-African bodies were captured, brought to the coasts of the Guinean Gulf and then forced into ships to be enslaved in the Americas (the Caribbeans, the United States and Brazil in particular). Architecture intervenes at many steps in this process of displacement (the most massive in human history); however, I would like to focus on the slave ship in this text, as a technology without which the entire principle of the slave trade would have been simply impossible.

Slave ships were transporting from 400 to 700 slaves at a time in such horrifying conditions that 15% of them would not survive the trip, dying from diseases, from the cruelty of the crew or by committing suicide. Design seems to have “a solution to each problem” since some nets were sometimes set up around the ships to avoid slaves to jump overboard to escape this hell. Similarly, the ship was also designed to accommodate a potential riot from the slave as the crew would then be able to barricade themselves on the top platform of the ships to later gain back the control of the ship.

Let’s look at the ship as a holistic piece of design itself: rarely would an architectural set of plans and sections be able to present the violence of architecture on the bodies the way it does in the one presented above. Have you ever been viscerally disgusted by an architectural plan? As a matter of fact, this specific set of drawings was created for this matter: it describes precisely an actual boat but was not drawn by a naval architect or engineer, but by a group of abolitionists who wanted to illustrate the horrific conditions of the slave ship. Because the drawings were recognized by historians like Marcus Rediker, as exact in what they describe we can however consider them as architectural plans in the same way that if they had been drawn by the architect himself, although we might want to acknowledge the ingenuity of simply adding bodies to an architectural plan to reveal the violence of the architecture it represents. The four platforms of the ship were clearly indexed on an approximate minimal size of the bodies. Men, women and children were compartmentalized and one can notice the disproportion of their amount: this is explainable by the consistent monetary preference to displace bodies from Africa, rather than developing procreation “on site” that was considered as too costly.

Many historical books give us a precise numerous account of what the slave trade was about; however, only a few seems to take on describing the unfathomable horror that these ships were providing. Among them, we find Marcus Rediker‘s book The Slave Ship: A Human History (Penguin Books, 2008), and C.L.R. James‘s history of the Haitian 18th-century slave revolution, The Black Jacobins: Toussaint L’Ouverture and the San Domingo Revolution (Random House, 1989), which describes the conditions of the ships in its first pages:

On the ships the slaves were packed in the hold on galleries one above the other. Each was given only four or five feet in length and two or three feet in height, so that they could neither lie at full length nor sit upright. Contrary to the lies that have been spread so pertinaciously about Negro docility, the revolts at the port of embarkation and on board were incessant, so that the slaves had to be chained, right hand to right leg, left hand to left leg, and attached in rows to long iron bars. In this position they lived for the voyage, coming up once a day for exercise and to allow the sailors to “clean the pails.” But when the cargo was rebellious or the weather bad, then they stayed below for weeks at a time. The close proximity of so many naked human beings, their bruised and festering flesh, the foetid air, the prevailing dysentery, the accumulation of filth, turned these holds into a hell. (C.L.R. James, The Black Jacobins: Toussaint L’Ouverture and the San Domingo Revolution, Random House, 1989, 8.)

The bodies that were not surviving these conditions were thrown overboard to the sea into what Édouard Glissant and Patrick Chamoiseau call “the abyss” (le gouffre) in their book L’intraitable beauté du monde (The Unassailable Beauty of the World, Galaade, 2009) that begins with the following paragraph (as always with Glissant, the translation is almost impossible, hence the need I have to include the original French version before presenting my clumsy translation):

What comes back from the abyss

It is a rumor of several centuries. And, it is the song of the Ocean’s plains.

Sonic shells rub themselves against skulls, bones and cannonball now turned green in the bottom of the Atlantic Ocean. In these abysses, there are cemeteries of the slave ships. Rapacities, violated borders, banners fell and picked up from the Western world. And who constelate the thick mat of the sons of Africa from whom a commerce emerged, those are out of nomenclature, no one knows their amount.

The slave ship is thus the paradigmatic example of an architecture that serves the quintessential violence unfold by the same logic that then took the names of colonialism and capitalism. As written at the beginning of the text, it is fundamental to observe that this violence could have simply be impossible without the technological apparatus that design provides on the bodies. It would be a mistake to think of this relationship between architecture and violent ideologies only within the somehow comfortable context of history, without wondering what would be equivalents nowadays. They might not unfold their violence in the same extreme degree that the slave ship or the gas chamber historically did; however they use the same logic to control the bodies and enforce their ideological violence upon them.