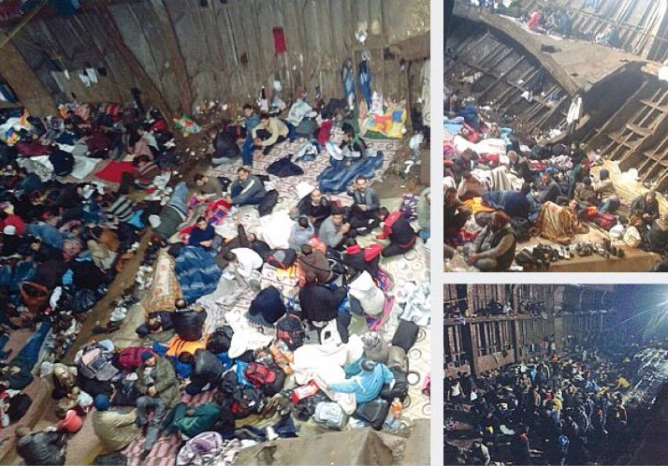 Léopold Lambert – Paris on February 12, 2015
If you enjoy articles of the blog, have a look at The Funambulist Magazine!

As we currently receive the most tragic news from off shore Lampedusa, with the probable death of over 300 migrants whose boats sank in the agitated Mediterranean waters (some others died of the cold), all we seem to experience on the comfortable shore, is a disarming sense of familiarity. Once again, the Mediterranean Abyss swallowed dozens of bodies during their attempted crossing to reach the European shores.  As I did in the past, I use the term of abyss as a resonance of Édouard Glissant’s concept of abyss (gouffre) to describe the historical genocide of the slave ships, whose crossing of the Atlantic Ocean killed hundreds of thousands of African bodies that were then thrown overboard into the depths of the sea. Nothing can historically compare to the slave trade and its degree of extreme persistent violence; however the Mediterranean abyss and its deadly overpopulated boats remind us of a time that we naively defined as over. Through their spatial configuration (and therefore their design), the slave ships reached a degree of overpopulation in an arrangement of bodies that compared to the storage of a non-human cargo. This degree of cruelty does not need to be equaled in order to reach the status of overpopulated space, and the smuggling Mediterranean boats most certainly reach it. In this regard, I would like to question to what correspond the notion of overpopulation in design, and what are its politics.

If we take a step back and examine coldly to what the adjective “overpopulated” refer, regardless of whether we are talking about an enthusiastic rock concert or one of these deadly Mediterranean boats, we find ourselves with the obvious: a space is overpopulated when it does not provide the conditions necessary to host a certain amount of bodies. If we continue with the obvious, bodies are material, which means that they cannot spatially overlap each other, as we often experience in a crowded subway! In strict physical terms, a space cannot be overpopulated, it can simply be populated to the maximum of its capacity. Bodily surfaces and their surrounding architecture (whatever it is) are thus in continuous contact. However, bodies (humans and non-humans) are living entities and they spatially end beyond the commonly definition of their limits (the skin for instance), insofar that they require an atmosphere of breathability in order to maintain their vital functions. We should not think of this atmosphere as fundamentally other to bodies, and this is how we can speak of an overpopulated space: it consists in a space where the vitality of bodies (the bios) has been disregarded in order to only attach importance to their physical occupancy. Body atmospheres can then shrink to their minimum, which concludes in the death of these bodies.

In an overpopulated space, architecture’s violence is manifest, since it is what prevent space to be extended. The contact with its surrounding surfaces leaves no chance to the bodies, regardless of the size of the space and its proportional amount of populated bodies. In this sense, the particularly cruel punishment of immurement (see past article) can be considered as deadly overpopulated conditions even if it concerns only one body. Mesterul Manole’s wife screams express well this violence in the Eastern European myth where she is immured by her husband: “Manole, Manole, Master Manole! The wall presses me too hard and breaks my little body! […] Manole, Manole, Master Manole, the wall presses me too hard and crushes my breasts and breaks my child.” The common nightmare envisioning walls and/or ceiling suddenly moving towards our body, thus reducing our spatial environment (visualized in popular cinema, from Star Wars to Indiana Jones) also materializes the potentially deadly overpopulated conditions of a space.

These two last examples involve the intentionality of a transcendental entity to trigger such overpopulated spatial conditions. These intentionality is rarely aiming at the death of the bodies, but responds to criteria of economical and/or control efficiency that necessarily stops degrades humans and non-humans to rightful subjects. It is obvious in the case of the slave ships, where African bodies were considered as a bodily mass cargo without individuality, and therefore a disregard for the ‘percentage’ of these bodies that would never reach the American coasts. With a lesser degree, the way the Palestinian bodies are parked for hours in narrow lines materialized by metallic fences/guardrails — hence the intentionality of design — in various Israeli checkpoints (in particular at the border with Jordan as I experienced it last Saturday) seems to consider these bodies more for their animal characteristics — if we already limit rights for animals! — than their rightful human ones. In the case of the Mediterranean boats, the overpopulation corresponds to a maximization of the smugglers’ profits, which is proportionally inverse to the safety of the migrant bodies, already engaged in a extremely perilous journey to reach countries that antagonize and criminalize them, and that seems more equipped to collect its potential drown/frozen bodies than to politically prevent the very conditions of these dreadful migrations.

The designs of the slave ship and the Israeli checkpoint — putting them in the same sentence does not authorize to attribute them the same degree of violence — are elaborated to allow their overpopulation through the bodies forced into their controlling space. Through this intentionality, they thus correspond to what we have called “cruel designs” in the past. However, intentionality does not constitute the exclusive means of violence and the politics of overpopulate spaces often intervene within architectures that were not conceived specifically for them. We cannot hold the Mediterranean ship builder/architect responsible for the deaths occasioned by the predatory use of his/her boat by smugglers; yet, as designers, we should always remember that harmful/deadly overpopulation occurs in a relation between design and bodies. The power that the former has on the latter should therefore always be considered at every scale of its potential violence.