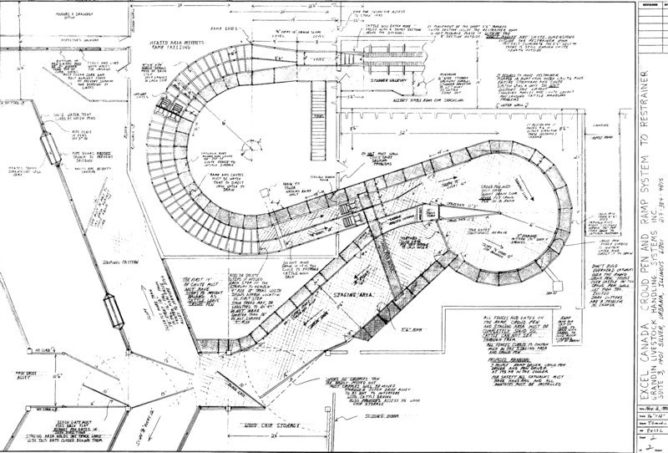 Dr. Temple Grandin is a professor at Colorado State University who wrote several books about autism and animal science. Her autism allowed her to a detailed perception of the animal behavior and the factors that influence it. Grandin’s architectural inventions were created in reaction to particularly brutal and insensitive means of bringing the cattle to their ultimate slaughter. Her designs provide a multitude of material and spatial apparatuses based on a deep understanding of cattle’s inherent behavior and tendencies that leads it to death without stress nor indication of what is about to happen to it. The drawings that follow this article demonstrates of this precise care for the animals that seems to integrate the totality of factors that could potentially affect them on their way. Such an exhaustive care associated to the generous sharing of the totality of plans, techniques and advice is by all means admirable, and  I don’t think that her design is problematic in the way it functions but rather, in what it reveals about architecture in general.

Let us begin by saying that a design that is created in view of bringing bodies from a point A to a point B strongly suggests the anticipatory aspects of its conception. Even in the case of a simple corridor like the ones we experience on a daily basis already holds a certain degree of authority enforced by architecture through the material means it uses to effectively brings body from one side of the corridor to another, leaving little option to this body. For each corridor we experience, there was a transcendental entity (architect, engineer, politician etc.) that, not only anticipated this movement when conceiving the space that contextualizes it but also had an interest in having this movement effectuated.This anticipatory aspect of architectural design is admittedly difficult to fully suppress in the creative process since it mostly defines its essence; yet, understanding the degree of violence that it allows the designer is an important step in the awareness of architecture’s weaponized characteristics.

We should go even further in the examination of what Grandin’s design suggests about architecture. Her scheme intervenes within the cogs of a death machine that is accepted as a postulate — I personally eat meat so I accept it too. For someone who considers the industrialized death of an animal as ethically problematic, the quest for ameliorating its conditions without changing its output (death) places it in the always complex realms of the choice for the “lesser evil.” In this specific case, we can say that a slaughterhouse can be conceived as a death machine whose process conditions are in accordance with its violent output (what is commonly called “evil”) or can be conceived as a death machine whose process conditions are contradictory to its violent output (what is commonly called “lesser evil”). Tragically, when talking about the process of slaughterhouses as death machines, it is difficult not to think of the industrialized death machine that the holocaust enacted. The gas chambers disguised into common shower rooms by the Nazi administration can be considered as the most extreme architectural example of the relentlessness of the output in the case of a choice for what some would understand as the logic of the “lesser evil.” This horrifying historical example also illustrates how such a choice often reinforces the output by constituting a deception that do not even allow a form of resistance against it however hopeless it might be. Such an argument is made by Hannah Arendt (“The Eggs Speak up,” 1950) cited by Eyal Weizman in The Least of All Possible Evils: Humanitarian Violence from Arendt to Gaza (Verso, 2011) when she controversially describes the forced yet resigned administrative collaboration of Jewish councils during the holocaust “‘to avoid panic,’ ‘to minimize suffering’ or ‘for the larger good'” (Weizman, p36). Recognizing the complexity of the situation, Arendt however asserts that “when nothing else was possible, to do nothing was the last effective form of resistance, disorder was preferable to order, and the practical consequences of a refusal to cooperate were nearly always better than collaboration” (Arendt quoted by Weizman, p36).

What Weizman does not explicitly discuss however, is the fundamental void of sense that the concept of “lesser evil” constitutes. What we call dilemma corresponds to a difficult choice (usually ideologically reduced to two options). I won’t shock anyone by stating that a difficult choice can only emerge when all options are considered as more or less equally “good” or equally “bad.” The idea that one could hesitate between “evil” and “lesser evil” is therefore impossible, since if the term of “lesser” was effectively meaningful, the choice would become easy. If a choice is truly difficult to be made, it means that there is an hesitation between “evil” and “evil” (we should say “bad” and “bad” to avoid speaking within a moralistic realms). The term of “lesser evil” therefore intervenes as a sort of retrospective legitimation that hides the choice for a bad option and thus blurs the fact that some unconsidered options existed.

In the specific case of architecture, such a problem goes back to the question that I have often ask on this blog, which has to do with the paradigmatic commission of a prison given to an architect: should (s)he refuse it or try to improve its conditions from the inside? The ethical answer to this question is invariably linked to the ethical consideration for the output. In other words, an architect could consider that prison is an inevitable means of regulation of society as a postulate, in which case, it is her/his ethical obligation to indeed accept such commission and to improve its conditions like Grandin improved the conditions of a program that she did not fundamentally refused as such. On the contrary, another architect can consider that prison, in its very essence, constitutes an ethically unacceptable program within a given society, in which case (s)he will have to systematically refuse such commission. In any case, when facing a situation where all options seems to lead inexorably to the same ethically unacceptable output, one can remember Arendt’s words according to which “disorder [is] preferable to order” and “a refusal to cooperate [is] nearly always better than collaboration.”

Following images are designs by Temple Grandin (see many more on her exhaustive website):

Following images are screenshots from the film Temple Grandin by Mick Jackson (2010):