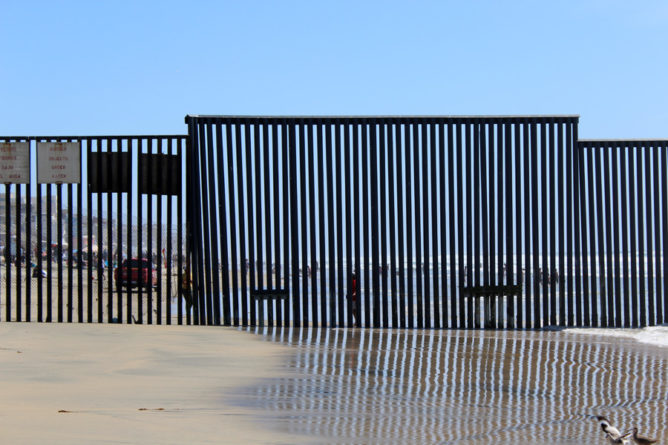 In the first days of my recent trip to the U.S./Canadian West Coast trip for Archipelago, I drove to San Diego and went to see the infamous materialization of the border between the United States and Mexico. This wall is one of the many on the planet that “protect” the Globalized North from the “rest of the world,” From the Israeli wall in the West Bank to the Korean DMZ without forgetting the hyper policing of the Mediterranean and Australian seas, the Globalized North is making sure that the advantages that it claims offering to its citizens do not become accessible to other bodies, and that the optimization of movement only implement itself for goods and not for humans.

It is when looking at this violent architecture that one realizes its absurdity. On the Mexican side, people enjoy Tijuana beach while others, from a small surmounting platform look at the rare bodies that appear on the U.S. side above which military helicopters never stop to patrol. As visible on the following photographs, the U.S. side has been attributed the status of state park; cars can’t access it and one has to walk for a few miles to access to the border itself. Such status is of course not innocent and we can euphemismally suspect that the American authorities are more interested in being able to survey a treeless desert zone than to actually protect local fauna and animal species — the latter might however be affected by the separation of the territory.

As written earlier, I participated since then to a roundtable seminar about “Design, Politics, and the Question of Form” at the New School (see past article), in which political scientist Victoria Hattam described how a significant part of the wall (not the part shown here) has been built with recovered helicopter landing mats from the Vietnam war (1955-1975). Such a material transposition certainly reinforces the aesthetics of war that the wall carries. It is hard not to associate this idea with the well-known wall designed by Maya Lin for the “Vietnam [American] Veterans Memorial” in Washington DC. One can note the irony that the wall that seems to carry a faithful testimony to this war — helicopters were prominent weapons of the U.S. army — is the one that now separates the U.S. territory from the Mexican one. What Victoria’s research on the transposition of these landing mats to the wall allows us to think is that the diagrammatic lines of power traced on maps carries a much higher complexity than its simple enforcement. I evoked many times the paradoxical notion of the thickness of the line (clearly visible in the photographs below), but this is also true for the materials used, as well as the assumed aesthetics of violence (or not) that architecture recounts. The fact that this type of walls is often built unilaterally signifies clearly on which bodies it is intended to unfold its violence onto. They are the embodiment of the cold war binary paradigm of “us and them” categorizing each body of the world in either one or the other depending on their location in reference to the walls of the fortress of the Globalized North.

All the following photographs/panoramas are by Léopold Lambert (April 2014) ///