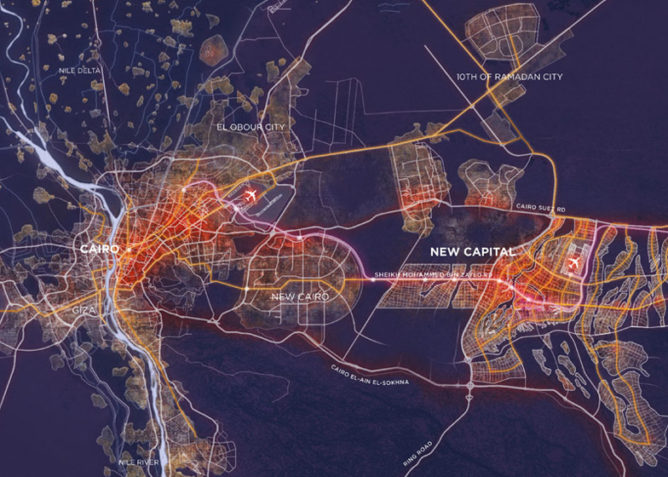 Masterplan for a new Egyptian Capital by Skidmore Owings, & Merrill (2015)

Léopold Lambert – Paris on April 24, 2015
If you enjoy articles of the blog, have a look at The Funambulist Magazine!

About a month ago, the General el-Sisi’s administration announced that the Egyptian government will be soon building a new capital city for the country. Designed by the famous American architecture office Skidmore Owings, & Merrill (SOM), the masterplan of this new city places it in the desert about 50 miles East of Cairo, thus continuing a politics of expansion to the desert that someone like friend Mohamed el-Shahed has consistently proven as unsuccessful. Yet, this plan should not be judged for its success or, rather, its success (i.e. the actualization of the intents that motivated its construction) is precisely what should be feared here. The following text will attempt to articulate the hypothesis that this masterplan will constitute a new urban paradigm for the future, sharing similarities (although updating them) with the infamous Georges-Eugène Haussmann’s masterplan to radically transform Paris between 1853 and 1870, which is well-known to have facilitated the counter-insurrectionist military movements once implemented, as well as with the appropriation of the brand new Brazilian capital by the military dictatorship in 1964.

Let’s start with a reminder that since July 3, 2013, Egypt is ruled by General el-Sisi after the army overthrew the elected Mohamed Morsi’s administration after massive protests contested the politics of the Freedom and Justice Party (the political party of the Muslim Brotherhood). Since then, Sisi and the army have conscientiously undertook to break the inertia of political gatherings in Cairo that started with the 2011 revolution. The administrative and consular areas of the city are sealed by heavy concrete and steel barricades, and their access is strictly filtered to only allow authorized people to these parts of the city and, in other areas, various architectural militarized elements defend specific buildings or dissimulate armored vehicles (see past article). The military understands that, despite their overwhelming domination, the control of a urban fabric is easier to implement when undertaken at the source, in the designing phase of the city. It is thus not that surprising to see a soldier-president deciding to create a new city, where military control will be fully part of the agenda (whether it is explicit as such, or not). As Mohamed el-Shahed describes in an article for Architectural Record, such a control begins with the very property of the land on which this new city will be built:

The Capital Cairo also has the potential to become the world’s first privatized capital city. While the Egyptian government, with various ministries including the Housing Ministry, is providing legal and logistical support for the project, the Egyptian military controls the desert land where the project is to be realized. A 1997 presidential decree gave the military control over undeveloped land, with little to no oversight from civilian institutions. Since then, the military has made several deals with private companies to develop exclusive communities for maximum profit. President Abdul Fattah el-Sisi clarified in a statement that The Capital Cairo will not be built with public funds, clearing the way for the possibility of private capital to take over entirely. (Mohamed el-Shahed, April 2015)

Incorporating the governmental, consular and economic entities of Cairo, this new capital is likely to increase the social fragmentation of a city, whether it is indeed incorporating a certain degree of privatization or not. Cairo is already using distance as a means of social segregation — it is not the only city in the world — and the relocation of the middle and higher social classes fifty miles further is part of such a strategy. Using the historical example of Brasilia, we can see how distance had strongly served the Brazilian dictatorship during its rule, despite the fact that such a decision had been made prior to it, the conception/construction of the city having occurred between 1956 and 1960, four years before the military coup d’état (for more about the weaponized urbanity of Brasilia, you can listen to the conversation I had there with anthropologist Antonádia Borges on Archipelago).

Distance is however not the only favoring condition for control. The very physicality of the new city, almost always makes it easier to implement a control of its space than in the context of an historical city. The reason for this holds in the practice of architecture design itself: a masterplan, whether designed by one or several offices, always corresponds to a vision anticipating the organization in space of the bodies living in it. Regardless of the intentions — in the case of Brasilia, we can recall that Lúcio Costa and Oscar Niemeyer were well known for their leftist, if not communist, agenda — this anticipated transcendental organization of the city inscribes the latter within a comprehensible scheme and, thus, a rationalized scheme of control.

We might want to held architects and urban planners in an even higher degree of responsibility with what is implied here. Because these professions correspond to an expertise, they tend to consider that they know better “what’s good” for the bodies that their product will eventually host. For this reason, I have to suggest the hypothesis that architects and urban planners have an intrinsic aspiration to work with an institution like the army, whose main function is to implement rationalized scheme of control, and thus insure that the expert intentions developed by them will find their actualization.

It would be interesting to know the degree of explicitation given to SOM by the Egyptian government about its control aims, through this new urbanism. Whatever this degree was between the government and the designers (but also within the government itself), the American office uses the usual magic terminology to elude this aspect of the design to favor a description of its project through a simulacrum of consensus that the usual media rushed to re-distribute without questioning any of it. While Dezeen quotes SOM designer Daniel Ringelstein, “The Capital Cairo complements the national vision for an Egyptian renaissance,[…] this is a rare opportunity for the people of this vibrant nation to express and build their aspirations of a better life for all,” Archdaily adds to this quote what might have been directly copied from the press release, and thus informs us that “100 unique residential neighborhoods will provide housing. From medium to high-density, these will be informed by the region’s climatic conditions, employing passive cooling through natural breezes and incorporating native vegetation.” We can distinguish how, behind the sustainability terminology, we can recall Haussmann’s hygienism in 19th-century Paris; a consensual discourse hiding the militarized aspect of such a scheme. Once this rhetorical cloud will have dissolved, we will have to held SOM responsible for the social and counter-insurrectionist violence they will have contribute to produce. Nevertheless, we should not forget that what is true at the scale of an entire new city, is also be true at the scale of smaller design production too.