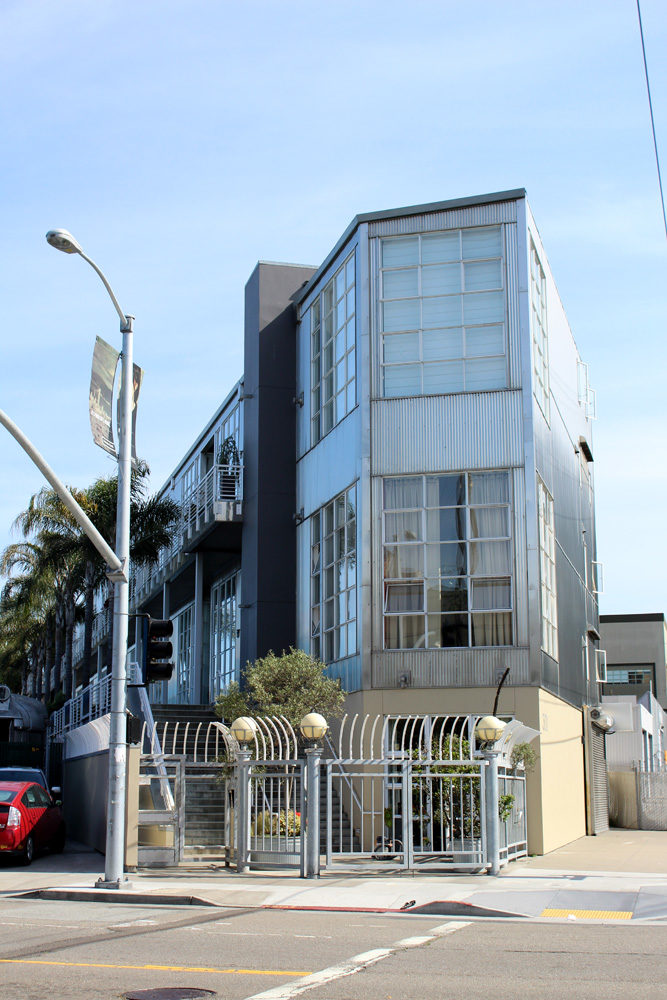 The following article is a sequel and a synthesis of two past articles. While the first one, written in February 2013 was comparing the architectural design of the Western embassies to medieval castles (less in their aesthetics than in their spatial organization), the second published a few weeks ago was examining the colonial characteristics of gentrification especially in New York. I am continuing my American/Canadian West Coast trip for Archipelago and now finds myself in San Francisco where gentrification is particularly fast and violent. I recorded an Archipelago podcast with Alysabeth Alexander about this topic and in particular the role played by the privatization of transportation by the tech industry in the city of San Francisco where more and more of its employees are encouraged to live while working in Palo Alto. This podcast will be released on Monday, but before doing so, I wanted to present a particularly blatant example of the way architecture does not simply creates real estate value on a given land, but also organizes space in a defensive and antagonistic manner. One of gentrification’s characteristics consists in the fantasy of danger that gentrifying bodies have for their gentrified counterparts — hence the need for them to accelerate the process — and therefore requires from architecture to provide a semiotics of security.

I encountered the building on 301 Rhode Island street right before recording this podcast and coincidentally  — or rather, logically — a tech industry shuttle was parking right in front of it (see photographs below). This building is only one example among many others of what I would like to call “gentrifying fortresses,” yet it presents a certain amount of characteristics that makes it particularly paradigmatic of the role that architecture plays in this societal process. A look at the photographs below will show you how there has been a real architectural care in the conception of the design (spatially, materially, aesthetically, etc.), which encourages us to think that this building was created by an architecture office, which spent dozens of hours of work into it, and is likely to be proud of it for that matter. I would like to argue that, for this reason, the responsibility that architecture holds for the consequences of the spatial apparatus it embodies is even stronger than in the case of developers’ projects.

The orientation of the building is already problematic as the most exposed facade to the street is voluntarily left opaque in an explicit refusal to dialogue with the neighborhood. This aspect of architecture is however more symbolical than actually violent on the bodies. The access to the building, on the other hand, is paramount of the argument I have been regularly making in my writing about the weaponization of architecture in the domestic realms. This building could have negotiated the conditions in which it was gentrifying its neighborhood — an already problematic position but simultaneously a more arguable one — by proposing to the latter a public space of quality through the interlacing of public and private space and the high porosity of access to it. On the contrary, each access to the building constitutes a hyper-defensive checkpoint where fences have been raised with a secondary vertical element in an explicit antagonist declaration to all body who does not reside in the building. Similarly, the entire base of the building is made as little porous as possible to prevent any interaction with the street to occur.

As often in architectures that reinforce social disparity, the violence deploys itself mostly in the privilege of access to a space (having the key, or the code) rather than in the entire spatial formation of the building. In the case of this specific building, one could destroy the fences that prevents its access to every body and a public pedestrian street would be thus created. However, we should not forget that these fences are not additive to architecture, they are architecture. An architect could argue that the decisions of placing them was not his/her choice but their presence still belongs to the architect’s responsibility as they are as much part of architecture as windows or columns are, and ways to prevent such a controlled access exist when they are being considered as core decisions of the project itself. In other words, the societal consequences that an architecture triggers cannot be thought at the end of the conception, but rather, they need to be engaged all along the creative process.

All following photographs by Léopold Lambert (April 2014):  Tech industry bus across the street from this building