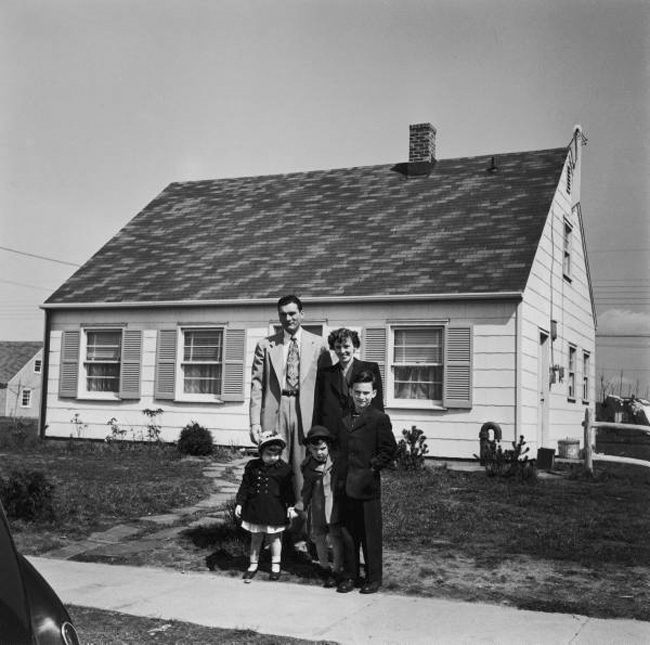 A picture of a family infront of their Levittown house (Cape Cod design), Tony Linck for LIFE Magazine, 1947 /// Found by Olivia Ahn

In the frame of a recent conversation recorded for Archipelago with designer Olivia Ahn about the research she has been conducted these last two years, I had the opportunity to re-articulate a few references that could compose a counter-history of American suburbia, as well as to learn additional ones thanks to her work. The latter focuses on the post-war invention of the suburban house as an architectural typology that simultaneously invents (or reinvents) an heteronormative gender performativity.

As I had the opportunity to write in Weaponized Architecture (dpr-barcelona, 2012), the rationale behind the creation of American suburbia is multiple and more strategical than usually admitted. Beyond the official historical version that insists on the ability for each member of the American middle class to become the owner of its own house, lies a political agenda that unfolds itself through the weaponization of the totality of scales of design. I will expose these interpretations through a form of zooming within these scales that start by the entire American territory and end with one of the smallest designed object, the drug, in order to propose a holistic examination of the strategies that lies behind suburbia.

Suburbia could not have existed without the individualization of transportation. Between 1936 and 1950, General Motors, Firestone Tire, Standard Oil of California, Phillips Petroleum, Mack Trucks, and the Federal Engineering Corporation purchased the street cars and electric trains of 45 cities, and systematically destroyed them in order to create an exclusive dependency to the automobile industry that these corporations represented. Found guilty of conspiracy against the 1890 Sherman Antitrust Act, they were condemned to pay the ridiculous fine of $5,000. Later in 1956, the National Interstate and Defense Highways Act, conceived by the Einsenhower administration, reinforced this dependency by constructing 41,000 miles of interstate highways. These transportation axes thus allowed the necessary fluidity to live outside of cities and work in them.

As the name of the Act indicates, there was an explicit militarized agenda for the creation of these highways. Within the context of the cold war and the nuclear threat, the strategy that they unfold consisted in the maximization of military movement, as well as the territorial spreading of population and resources. Let’s examine these two purposes: the first one consists in the capacity for any of these highways to become instantly militarized infrastructures. It involves the simple transportation of motorized divisions from one point of the territory to another, but also the accommodation of military aircraft landing on them as NATO exercises in West Germany have shown in 1984 (see past article).

The second purpose, which consists in the spreading of the American population and resources is based on the territoriality of any sort of bomb. In other words, the lethal energy liberated by a bomb — even a nuclear one — functions intensively (see past article); it means that the more a body or object would be situated geographically away from the epicenter of an explosion, the less this body or object will be affected by it. Spreading population, resources, industries and military bases was therefore a way for the American government to diminish the destructive effects of a nuclear attack:

It was in this context that in August 1951, the president announced a national policy for industrial dispersion, and the National Security Resources Board quickly followed with a booklet entitled Is Your Plant a Target? that proclaimed, ‘The risk of an all-out atomic attack on the United States grows greater each day, since we are no longer the sole possessor of the secret of the atomic bomb. This means that no industrial area in the Nation can be considered safe from attack.’ To guarantee survival, the National Security Resources Board insisted, would require that productive capacity be protected: ‘The dispersion (or deployment in space) of new plant development for war-supporting industries can make American production less vulnerable to attack.’ Space could protect men at the battlefield, the authors continued, and space, by multiplying targets, would diminish ‘the vulnerability of any one concentration.’ (Peter Galison, “War Against the Center,” in Grey Room 04, Summer 2001, MIT)

Spreading population signifies building the structure that will host its bodies. The suburban house presents therefore itself as an architectural solution to the dispersion problem. The way of life that it materializes does not necessarily implies more social interaction than the brief salute between neighbors who happen to be outside of their house at the same time like a multitude of films have shown. This minimal social interaction is third interpretation of this counter-history of suburbia. In City of Quartz (Verso, 1990), Mike Davis exposes how individuals living in the suburbia experiences contact with other humans only within semi-private hyper-policed environments like the office or the shopping mall that was implemented for the first time the same year than the National Interstate and Defense Highways Act (1956). This strategy is political capitalism (the association of capitalist economic logic with governmental agenda) at its highest level of efficiency: the office and the mall are the post-war sites of production of economic wealth, while their private territoriality allow a zealous policing of any non-normative (i.e. non-productive of wealth) behavior. In a time of political turmoil that culminated in the late 1960s, public space had thus been killed to, not only avoid any accommodation to the gathered political bodies, but further, to avoid any aspect of society that would not be translatable into economic production.

The fourth and last aspect that I would like to present here is the hypothesis given by Ahn in this twenty-sixth conversation of Archipelago. The historical context that starts her research saw an important part of the American female population, who used to work in factories during the second world war, deposed from its paid labor by the massive return of veterans. The suburban house thus embodied the invention of a domain that could host female bodies for them to accomplish their (unpaid) part of the work in the construction of the heteronormative nuclear family. In this regard, Ahn studied various advertising campaigns for suburban houses, which had been clearly designed to address a female middle class audience. She does not miss to point out that the architectural plan becomes also part of this realms of representation that, beyond architecture itself, signifies the social structure of a determined way of life.

The suburban house, more than any other housing typologies (certainly more than the city apartment), gives itself the means to attribute to each room a codified aesthetics and spatial composition that expects a set of normative behavior that are specific to it. In other words, we know what a kitchen, a bedroom, and a bathroom look like, and we know what we should be doing in them. We usually think that these rooms have been built around the actions that we wanted to accomplish, but could that be contrary? The codification of behaviors corresponding to each specific room is such that the rooms tend to trigger the behavior more than the contrary. Similarly, the Frankfurt kitchen invented by modernism to construct an optimized kitchen for the female body, tends to construct a normalized female body more than adapt to the uniqueness of each body (see past article). A simple example to understand such assessment can be seen in the following drawing from Graphic Standars where, not only a standardized female body is represented, but it goes as far as assuming that this body is wearing heels:

The last scale of design that I wanted to expose in this strategical construction is also noted by Ahn in her research: the contraceptive pill. The post-war era saw another form of (bio)political capitalism in the embrace of the pharmaceutical industry for capitalist logic. The contraceptive pill that started to be distributed in the early 1960s had been the successful result of feminist struggle to end with the idea that the female body was to be considered as a life-producing vessel; however, as Beatriz Preciado exposes in Testo Junkie (The Feminist Press, 2013, see past article) the pill became the paradigmatic object of what she names “pharmacetical-pornographic society,” that is a society whose bodies see their biology as well as their sexuality controlled and produced through the production of desire influenced by imposed spectacle. The contraceptive pill regulates the demographics of a given population while reinforcing the heteronormative structure of the society composed by this population. This structure is built on the gender performativity unfolded by Judith Butler, which functions particularly well in the daily reiteration of behavior that suburbia promotes. This is how Ahn, through her research and design work, proposes an attempt for “queering architecture” (see archipelago conversation) by intervening directly on the plan of the suburban house, while another thinker, Karen Tongson (soon on Archipelago) introduces us in her book Relocations (NYU Press, 2011) to the queer imaginaries developed by suburban bodies in resistance to the very logic that created the space where they live.