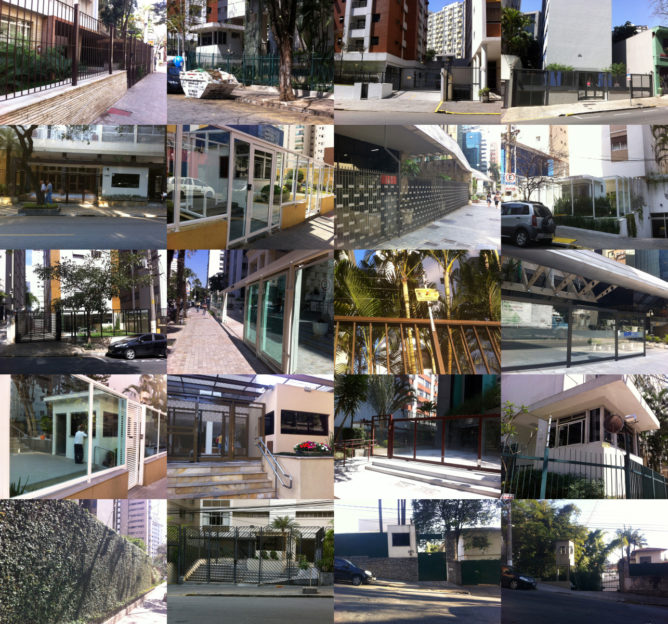 I am finishing a trip in Latin America (Mexico City, Santiago, Buenos Aires, São Paulo, Rio de Janeiro, and Brasilia) to record a series of conversations for Archipelago. Having experienced these cities for the first time, I received many advice from locals — in English, Spanish, and Portuguese — to be “careful” about where I was going, when I was going there, how I was going there, and how I should behave or not behave once there. Whether these advice were fully corresponding to a reality or not is not mine to say since it would pretend that I know better, which of course I do not. What I am interested to examine here is how these discursive prevention adds a form of additional layer on the city that modify behaviors within it, and ultimately modify its physicality by crystallizing fear into architecture.

Slums are paradigmatic objects of the discursive recommendations that erect a barrier between them and the rest of the city based on the assumption of criminal behaviors within them. Once again, my suspicion that an important part of this narrative is of ‘mythological’ order rather than a reality is much more based on the similitude I can observe between these advice and others I heard in urban situations with which I am more familiar than on extensive personal experience. For this reason, this outsider suspicion should not be exposed here. Slums are however not the only territories on which a fearful discursive layer has been adding: depending on who provides the recommendation, it can go from specific neighborhoods at specific times to any public space in general. I recently wrote an article about the notion of illocution (i.e. a sentence that does what it describes when it describes it); fearful narratives are not illocutions, since they don’t actualize what they describe, but they are part of a similar linguistic group that is characterized by a necessary influence — whatever it might be — they trigger on the one that hears them. “Ignorance is bliss,” says the idiom against this specific group of locutions. Similarly, I learned one evening in Mexico City that one of the neighborhood I visited earlier was known to be “relatively dangerous.” Have I heard it before visiting this neighborhood, I might have avoided it — which would have been a shame! — or behave however slightly differently while being there. The point here is that when we experience a part of the city — whether familiar or brand new to us — we add on what we see an additional layer produced by the imaginary we have of it.

The discursive fear is far from remaining at the strict ‘invisible’ level; it then materializes into various architectural apparatuses of fortification imagined as solution to it. The wall remains the most used of these apparatuses. As I wrote in a more abstract article entitled “Bodies/Objects, Design and Violence,” the invention of the wall that prevents bodies from accessing one of its side, was made simultaneously with the inventions of the door and the lock, which provides access to each side of the wall to a selected population of bodies. Fear crystallized into architecture manifests itself through the multitude of walls that striates our cities. The numerous fortified entrances of upper social class housing buildings in the center of São Paulo (see above) are paradigmatic of such a process of crystallization of fear. There are many variations of the same securitarian scheme, using aesthetics that embrace more or less their violent effect — many of these entrance walls happen to be transparent — but the small sign that accompanies the electrical wires on top of walls are explicit in the extreme means they are embodying.

It would be too easy however to stigmatize these specific architectural fearful apparatuses because of their extreme characteristics. We can point out São Paulo’s entrances because they are expressively extreme; yet, they operate according to the same logic than any other wall/door/lock assemblage enforcing private or semi-private property (i.e. space accessible only to a selected population). If we could see what is ‘behind’ the large doors of housing buildings in Paris for instance, we would then realize how much of the city is being captured by such apparatuses. Fear and Protection are continuously triggering each other: the more we fear, the more we protect ourselves, and the more we protect ourselves, the more we fear. Fear is transmittable through discursive contamination, protection is mostly achieved architecturally. We can therefore act within both realms to struggle against the fear of otherness that fuels violence against entire parts of a given city/society.