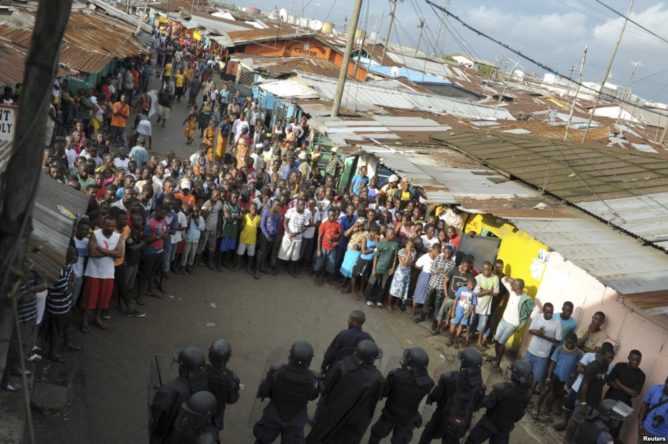 Last Friday, the Liberian government has announced that it was lifting the quarantine that was enforced on the West Point neighborhood in Monrovia. For ten days, the 70,000 inhabitants of this poor neighborhood were split from the rest of the city, and left in the fear of a potential contamination by the Ebola virus. Some of these inhabitants tried to break the police blockade surrounding the neighborhood but they were received with teargas and live ammunition that led to the death of a 15-year old boy named Shakie Kamara. Viral diseases particularly feeds the fear for otherness as it allows fantasies of contamination between bodies in an invisible realm. When such an antagonism is paired with an already existing one, directed towards the lowest social class of a given population, the segregation that emerges from it can be radical, as it is in West Point.

I already quoted extensively Michel Foucault’s course at the Collège de France about quarantine (in Abnormals) in an article dedicated to the 2013 manhunt of suspected terrorist Dzhokhar Tsarnaev in Boston (see also the article in The Funambulist Pamphlets dedicated to Foucault and Legal Theory). This situation had put entire neighborhoods of the American city into quarantine for a day, enabling the SWAT police squads to search every house one by one. This event resonated well with Foucault’s descriptions of a quarantined town in which the plague had been contracted, and the administrative and policed “quadrillage” (partitioning/policing) of the city implemented in order to contain the disease and manage the life of the city’s population. This type of urban crisis organization constituted for Foucault a new paradigm of meticulous administration of the territory — it is part of the shift towards biopolitics — rather than the former paradigm of exclusion of its sicked bodies like in the case of leprosy. As I have been writing often, the quarantined city and its “quadrillage” also materializes the weaponized characteristics of an architecture considered as ‘benign’ as a house: the walls that used to enforce private property now enforcing the temporary imprisonment of its inhabitants.

In the case of West Point however, the applied strategy of spatial segregation was relatively different. The various forces of police were not applying a “quadrillage” of the populated neighborhood, but rather was surrounding it preventing any of its inhabitants to leave the urban sector. In this regard, the fact that some of them seems to have let a few people leave in exchange for bribes illustrates well the ideological aspect of this quarantine, rather than its actual full implementation. The “quadrillage” quarantine is inclusive in the sense that it operates through the production of information: in the descriptions given by Foucault, the public inspector would visit each house each day summoning each of its inhabitants to inquire about their health status. The immobilization and imprisoning of the bodies is enforced in order for their administrative control to be effectuated and for information to be produced — that includes information that has nothing to do with health since the situation is rare when public inspectors could visit the private space of each house of the city. In the case of West Point and other historical cases of quarantines that are enforced from the outside in the form of a siege, the segregation is based on the exclusion of the immobilized bodies: they are contained in order to separate them from what is assumed as ‘more valuable’ bodies (the rest of the population). In the case of the siege quarantine, the contained population is considered as sacrificable for the sake of the rest.

The idea of sacrificing a population in the context of a disease operates according to the same logic than the usual (voluntary or incidental) mechanisms of exclusion of population based on their social and/or racial statuses in a city that would not be said to be “in crisis.” Of course, there is a sensible difference between the actual quarantine of an entire neighborhood preventing the access and exit of its territory, and the more common processes of “ghettoization” that most cities experience as they territorially and (infra)structurally favor richer (or whiter) populations. Nevertheless, this difference is only operating in terms of degrees and not in terms of essence: disease only exacerbates fear and antagonism towards the other. It is certainly not innocent if authors like Albert Camus in The Plague (1947) and Eugene Ionesco in Rhinoceros (1959), have dramatized diseases in their work to propose allegories of raising fascism. In their texts, the suggested contamination is an ideological one, yet it materializes an absolute essential difference between one body (sane) and another (sick). The city being the space where the logic at work through social relationship is the most intense, the neighborhood surrounded by the police but left on its own in its functioning and its security (health or others), can be seen as the spatial paradigm of social segregation in its simultaneous exclusionary and containment mechanisms.