Léopold Lambert – Paris on September 14, 2017
If you enjoy articles of the blog, have a look at The Funambulist Magazine!

Last month, I was lucky enough to be able to visit several islands of the Okinawa Prefecture (including Okinawa Island itself) and thus to see for myself the movements of resistance against the large US military presence in the ‘main’ archipelago (see map below) after having heard about it from past and future contributors to The Funambulist magazine, Wendy Matsumura (read her article about Okinawa in The Funambulist 9 (Jan-Feb 2017) Islands) and Lisa Torio. The following text, map and photographs thus constitute a small report of this too short visit, which may gain significant substance in the complementary listening of Wendy’s interview about the history of Okinawa for The Funambulist podcast’s 124th episode, published in parallel of this article.

Because the terms that designate territories, administrations, and people bear a certain complexity in their occasional overlapping, I propose to define them here in a small lexicon that, hopefully, will gain in clarity what it will lack in literary style.
– Ryukyu Islands (also known as Nansei Islands): geographic chain of 198 islands that range from Kyushu (Japan’s most southern of its four main islands) to the island of Hateruma, only a couple of hundreds kilometers off shore of Taiwan.
– Ryukyuan: indigenous people of the Ryukyu Islands. Although historically related to Ainus, recognized by the Japanese government as an indigenous people within the country’s citizenry, Ryukyuans are not recognized as such. As discussed in the interview mentioned above, the complexity of the Ryukyuan indigineity is such that it may be easier to define it by what is is not: it is neither an identity strictly comparable to other indigenous nations of the Pacific, nor one that has been totally assimilated by the Japanese ‘continental’ ethnicity. Ryukyuan also refers to the Okinawan language, spoken by less than a million people in the world.
– Ryukyu Kingdom: former independent monarchic regime of Okinawa from 1429 to 1879.
– Government of the Ryukyu Islands: former civil administration of Okinawa during the US occupation between 1945 and 1972.
– Okinawa: this name can designate the Japanese administrative prefecture that is composed by the central and southern archipelagos of the Ryukyu Islands — the northern ones are part of the Kagoshima Prefecture — or the largest island of the Ryukyus, or the second largest city (140,000 inhabitants) of this island after Naha, its capital (320,000 inhabitants). In the case of this article, the simple mention of Okinawa will refer to the prefecture. 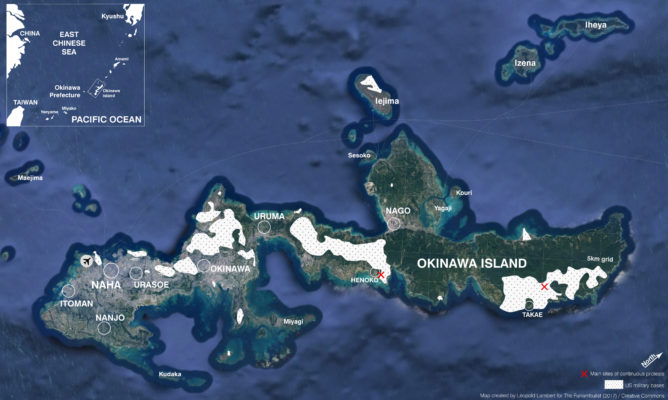 In The Limits of Okinawa: Japanese Capitalism, Living Labor, and Theorizations of Community (Duke 2015), Wendy Matsumura gives a Marxian reading of the various movements organized by the people of Okinawa from the 1879 annexation of the three archipelagos composing the Ryukyu Kingdom by Japan during the Meiji Era (1868-1912) to the beginning of the 1930s. These movements may have put less efforts in their opposition to the annexation itself than against the economic treatment of Japan towards Okinawa, which was more eager to massively exploit the agricultural and taxation productions of the islands, than to fully integrate its people and their collective identity to the national project.

In 1945, 185,000 soldiers of the US army and the Marine Corps invaded Okinawa and fought a battle that killed more than a quarter of the prefecture’s civilian population. Although it would be exaggerated to say that the people of Okinawa already found themselves between the violence of the US and Japan at that time, one has to however insist on the mass ‘suicides’ that the Japanese army forced onto the local population when it became clear that the main island would be lost. Similarly, the Japanese army forcefully displaced part of the civilian population of the most southern archipelago (Yaeyama) from one island to another, despite the high risks of malaria that displaced people would experience on what was then the inhabitable island of Iriomote.

After the armistice, the US military occupied Okinawa — the first governor was General Douglas McArthur himself — and started to seize a massive amount of landfarm. Okinawan were removed from their land and their houses were destroyed by military bulldozers. In the 1950s, the US military base land area corresponded to 14% of the prefecture and 42% of cultivated areas. In 1971, after fifteen years of local protests, the US reached an agreement with Japan and the so-called “reversion” became effective in 1972. The terms of the Sato-Nixon agreements were however received with outrage by the people of Okinawa as the military territorial presence was to mostly remain. Here again, it is important to recognize the responsibility of the Japanese government that collaborated and continue to collaborate in the continuous US military presence, while also acknowledging the influence the US had in the drafting of the new Japanese Constitution in 1947 that stipulate in its Article 9 that “the Japanese people forever renounce war as a sovereign right of the nation and the threat or use of force as means of settling international disputes. In order to accomplish the aim of the preceding paragraph, land, sea, and air forces, as well as other war potential, will never be maintained. The right of belligerency of the state will not be recognized.” The Japanese army is thus contained to strict defensive mission — with a slippery interpretation of what defensive can mean by nationalist governments such as the current Abe administration — and is thus dependent on the US to play a role in the geopolitical world scene, rather than adopting a more reserved attitude.

In 1995, one hundred thousand people protested the US military presence after the abduction and rape of an Okinawan schoolgirl by three US soldiers. In response, the US and Japanese governments implemented the Special Action Committee on Okinawa (SACO) to reduce “the impact of the activities of US forces on communities in Okinawa.” Activists affirm however that SACO’s “actual and hidden intention […] was restructuring and re-strengthening the bases” (Voice of Takae, 2013). Twenty-two years later, the US military bases still occupy a significant portion of Okinawa island and archipelago (see map above), and political organizers from localities adjacent to the bases, and from other parts of Okinawa Island have concentrated their resistive presence on two sites. 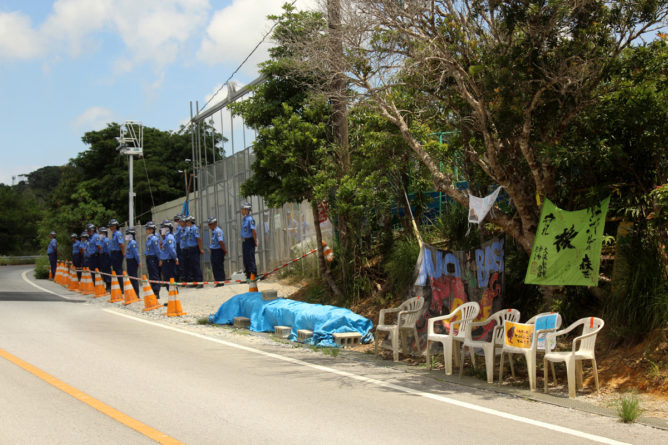 The first one was initiated by the people of Takae, whose village is surrounded by the largest military perimeter of the island, Marines’ Camp Gonsalves (more descriptively called “Jungle Warfare Training Center”), and that experienced the crash of an Osprey aircraft in the vicinity of its elementary school. This type of aircraft, which can take off in the way an helicopter does, is one of the main focuses of the resistive movement. The suspension of the construction of heliports (and the roads to it that they entail) in the middle of the precarious ecosystem embodied by the jungle, as well as the end of the use of the Ospreys and the danger that their lack of reliability constitutes, are two immediate demands that the Takae villagers and the people standing in solidarity with them have been making for the last eight years — we might call them “island protectors” in reference to other indigenous environmentalist struggles. The Yanbaru jungle is not the only environmental dimension that the villagers struggle to protect. 60% of the island’s fresh water comes from the perimeter of the US military bases, where eleven dams (see photos of one below) retain this water within a military area, with all the risks of contamination and toxicity that this entails. Every day for the last eight years, at least one person has therefore taken their shift at the tent standing in front of one of the base entrances, where a squad of police officers from the conservative municipality of Osaka — local police officers were believed to be potentially too sympathetic with the island protectors — continuously stand in silence. A squad of Japanese police officers defending a US military gate and the militarized jungle behind it: the image is quite evocative of what Okinawans are up against. 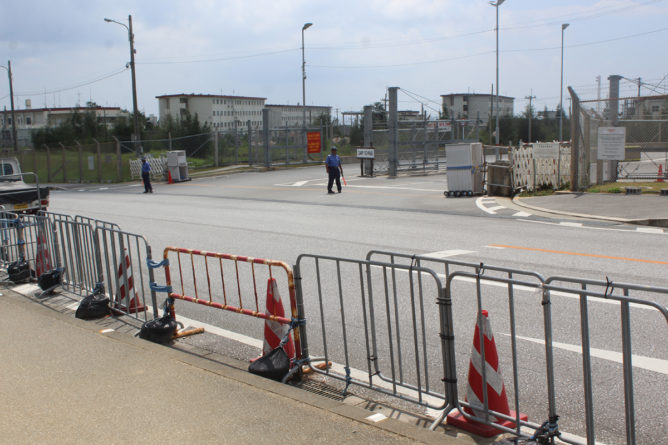 The second site of continuous protest is situated in Henoko, a town in the vicinity of the second largest base of the island, Marines’ Camp Schwab, where protests are organized every day to prevent the extension of the base. These protests have the particularity to be organized on land, in front of one of the base’s entrances, as well as on sea (with the help of kayaks), where the marine ecosystem is also threatened. Newcomers to the protest site are ostensibly photographed (see photos below) from the other side of the fence by what seems to be security officers from the Marines’ Provost Marshall Office. Buses from Naha comes every day to add remote protesters to the local ones.

US military bases are not the only one present in Okinawa. The so-called “Japanese Self-Defense Forces” also count multiple bases on the Okinawan ground, including one within the Naha civil airport itself, where commercial planes run along military ones (see photos below). The Rising Sun Flag seen by most other nations of the region as a Japanese imperialist symbol and worn on Japanese soldiers’ uniforms, is illustrative of what the suppression of Article 9 of the Constitution currently attempted by Prime Minister Abe would mean for Okinawa: the shift from an imperialist foreign army presence to a nationalist army one. US military bases would be re-used for the newly formed offensive Japanese army and the gigantic military target forced onto Okinawa would remain. This is why the island protectors are not solely assembled against US imperialism, they are also fighting Japanese nationalism through an explicitly pacific agenda, as well as pushing for an environmentalism that share more similarities with indigenous political struggles than with the Western ecological paradigm.

For more, read some of Wendy Matsumura’s and Lisa Torio’s texts:
– Wendy Matsumura, The Limits of Okinawa: Japanese Capitalism, Living Labor, and Theorizations of Community, Duke University Press, 2015
– Wendy Matsumura, “Okinawa: The Cold War Creation of a Model Jungle” in The Funambulist 9 (Jan-Feb. 2017) Islands
– Lisa Torio, “Can Indigenous Okinawans Protect Their Land and Water From the US Military?” in The Nation (December 20, 2016)
– Lisa Torio, “Abe’s Japan Is a Racist, Patriarchal Dream” in Jacobin (March 28, 2017)

All photographs above and below by Léopold Lambert (August 2017) /// 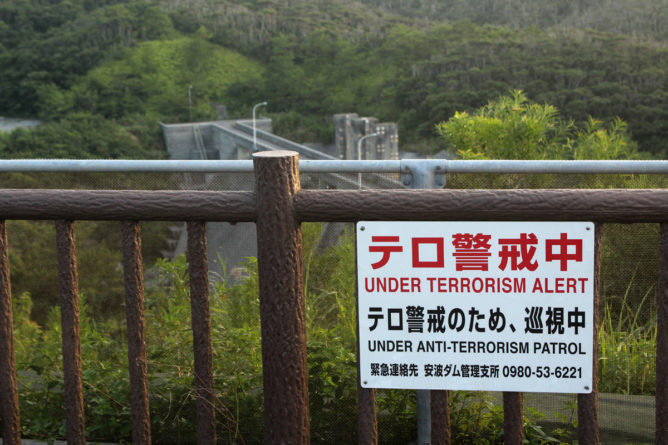 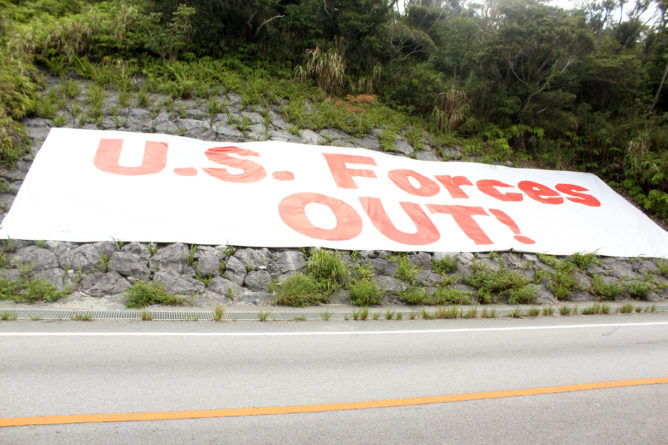 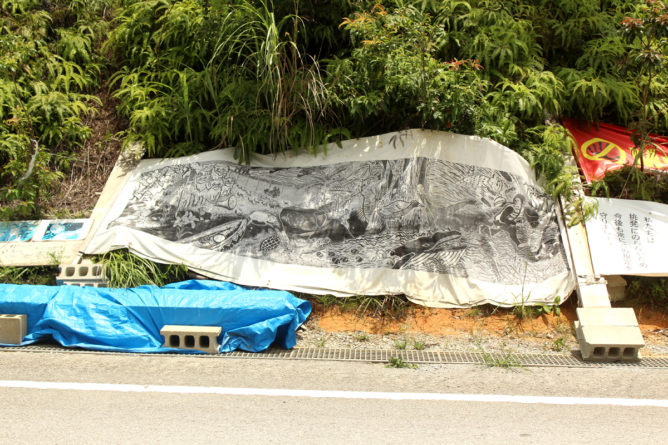 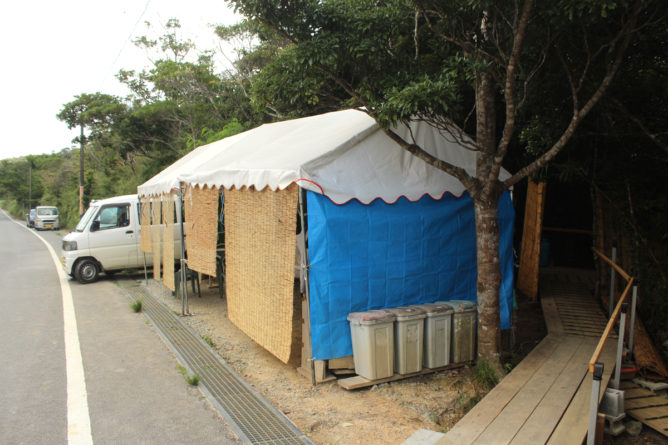 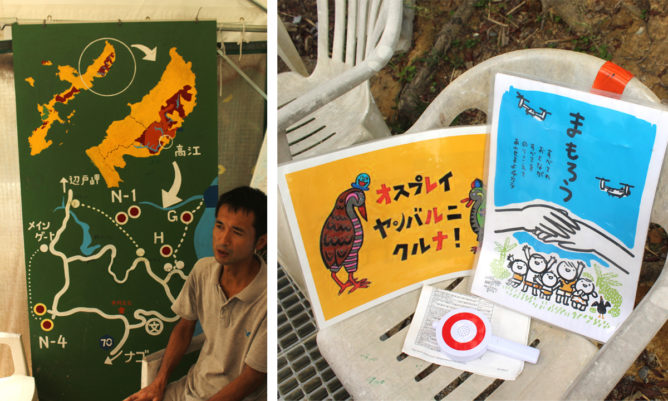 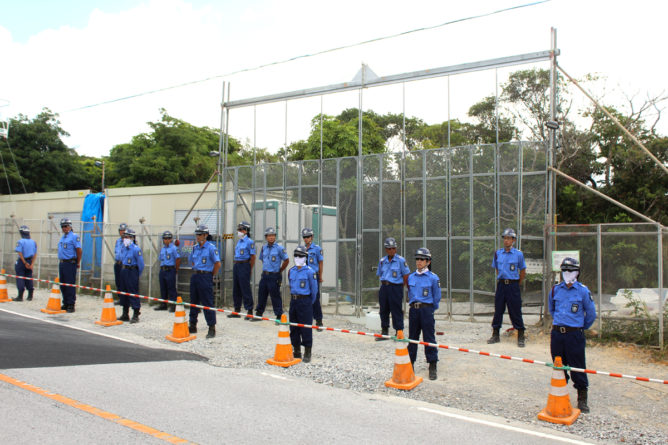 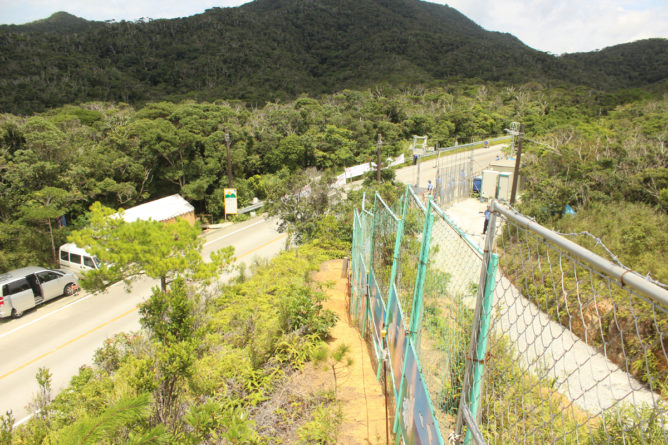 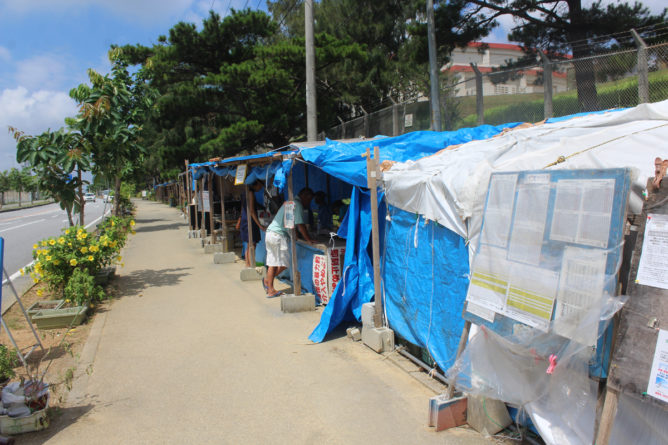 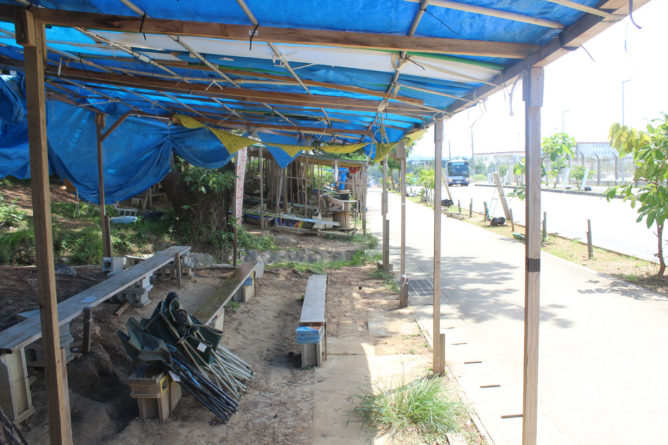 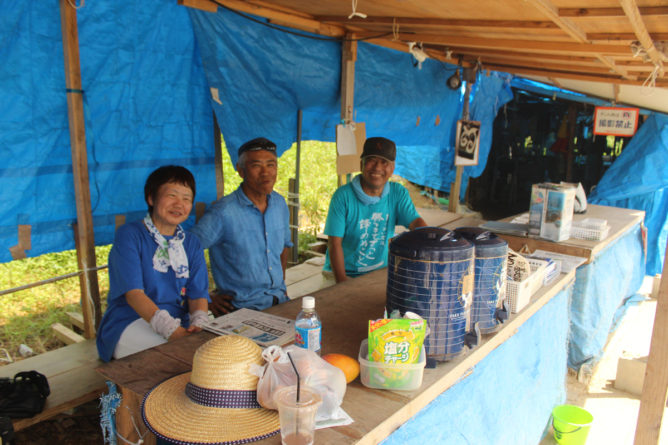 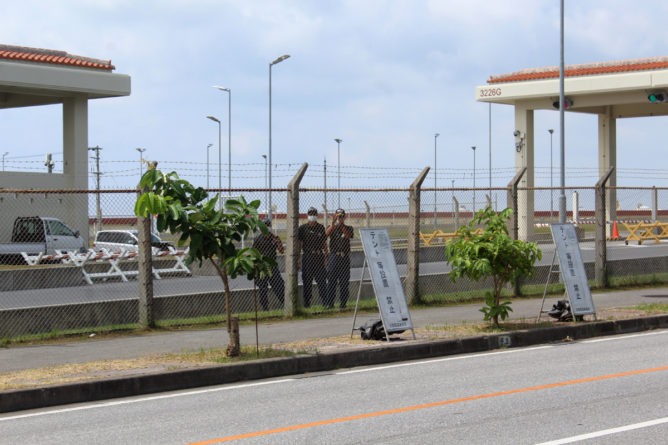 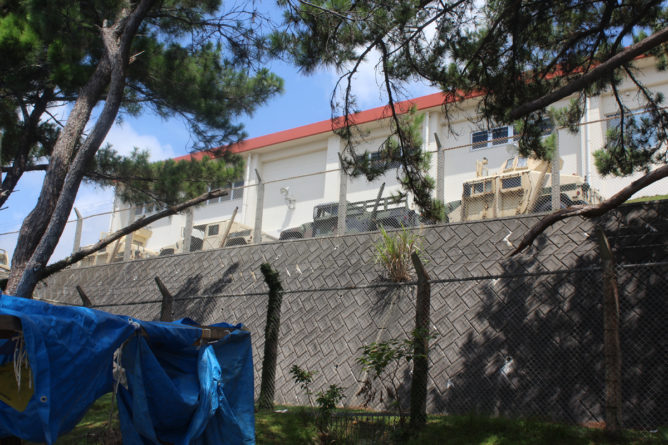 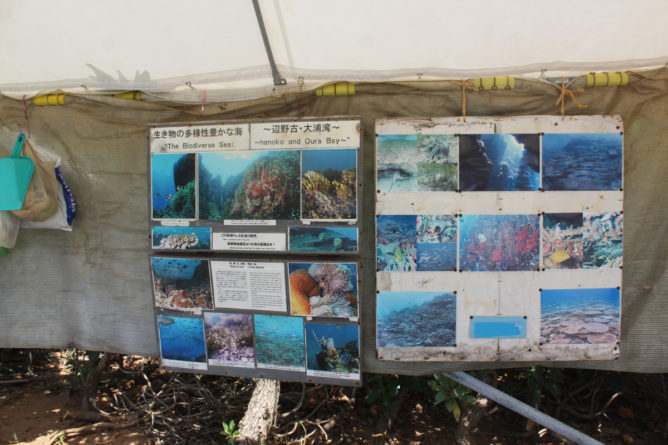 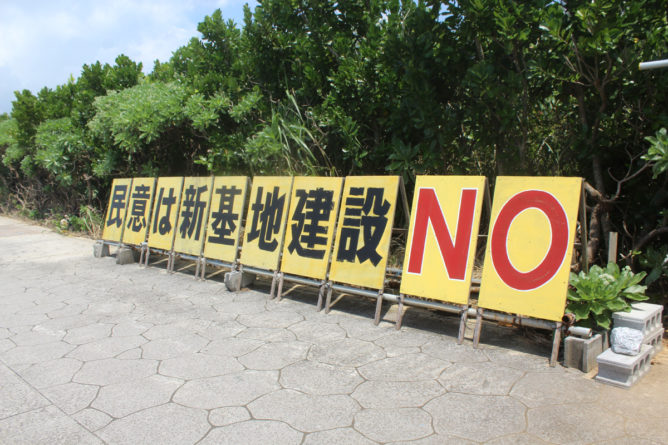 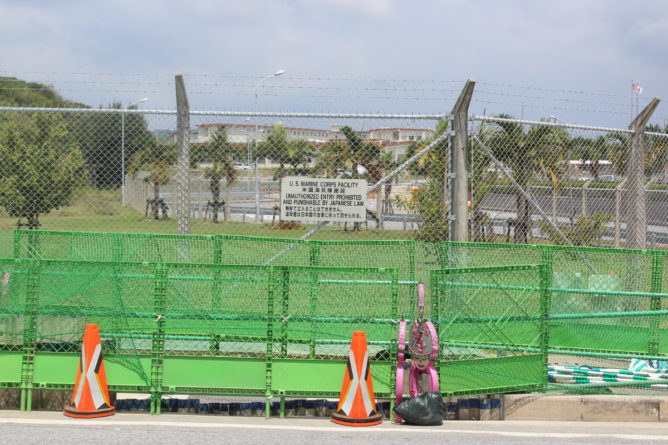