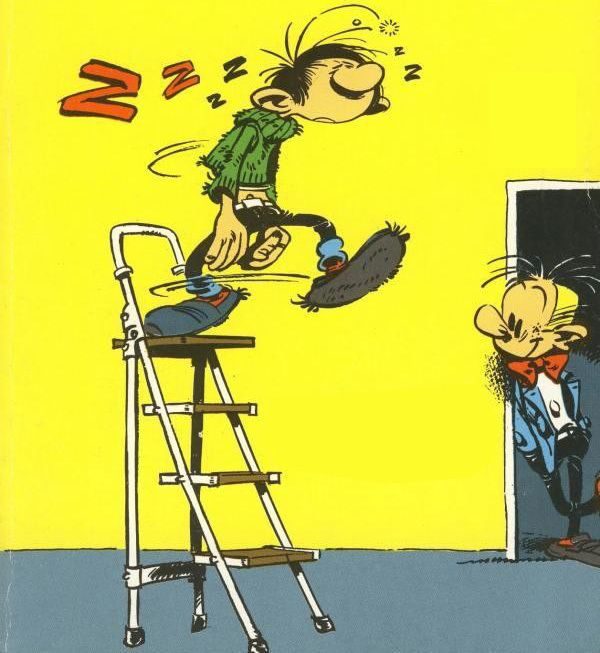 After having shared my experience of what a hypochondriac body might really be (see past article), I am now looking at another recurrent aspect of my own body: clumsiness! I am probably not the only one to regularly trip, make a (filled) glass fall on the table or bang my head into a low element; it seems therefore interesting to wonder what a clumsy body is really about.

Clumsiness is essentially occurring through a discrepancy of the understanding of the surrounding space by a given body, and the ‘actual’ layout of things. In other words, my body is aware that there is a glass on the table but its mapping of the position of the glass is sufficiently erroneous that I end up punching the glass that now pour its liquid on the totality of the table! It is well-known that the sense of vision, when not complemented by the other senses, can be deceitful as optical illusions reveal. A body that is not relating too much on its vision might be able to move confidently in the dark for example. We assumed to much that we know our sensory system and which organ is supposed to sense what. As presented by Hiroko Nakatani in her guest writer essay “Dissolving Minds and Bodies,” a device to apply on the tongue has been invented by neuroscientist Paul Bach-y-Rita, which allows blind people to have a spatial reading of their surrounding. The way animals like bats read their environment through waves of ultrasounds whose echo can allow a mapping of the limits of the space, is also extremely interesting in the variety of means through which a space and its elements can be understood by a body.

Nevertheless, the potentially erroneous mapping of the surrounding that a body does for itself, is only half of what composes clumsiness. The second erroneous mapping is the one that the body makes of itself as well. In other words, a clumsy body is one that does not know where it influence stops. I voluntarily do not write that a clumsy body is one that does not know its physical limits as these limits do not actually stop at the skin as we will remark further. We take for granted that we know exactly where the parts of our body are situated in space but the experience of clumsiness shows us that we actually don’t. I am not a dancer but I have been having an amateur sportive activity for many years and it helps me to suppose that before ‘acquiring’ a collection of gestures that inert bodies would not be able to accomplish immediately, a physical activity that involves an excellent coordination of the body, primarily requires the most accurate mapping of our own body in space.

Such a mapping can be done by the cautious attention to the way the environment affects our body, but it can also be done performatively by experiencing and observing the movement of our body. In this regard, in a recent conversation I was lucky to have with dancer-philosopher Erin Manning, she was telling me that working with autistic children made her realize that, when these children flaps their limbs repeatedly, they actually attempt to establish the limits of their bodies in relation to their spatial environment.

What are the limits of our body? We often consider that the skin constitutes it and we have an image of it that makes us think that it is an impermeable wall that protects the citadel of our body from the surrounding world. In reality, the skin is porous — the action of sweating is the most illustrative example — and constitute only a simulacrum of limit for our body. Our hair is not part of our nervous system but nobody would deny it as being fully part of our body: it is a first layer of body ‘outside’ the epidermic one. What about the air that we move as a consequence of any movement of our body? This volume makes you realize that someone is right behind you without seeing nor ‘touching’ her (him) or makes cards castle fall — clumsiness again! — while being at a distance of it. Should this volume be considered as part of our body? Maybe, maybe not. The question is difficult to answer when we think in terms of the question “where does our body stop?” rather than the one “what is the field of influence of our body?” or “what is the degree of dispersion of our body?”

These two last questions allow to think in terms of intensity rather than in terms of limits. The well-known butterfly effect — a butterfly that flaps its wings at a given moment is part of a totality of repercussions that can end up creating a hurricane later — addresses this problem: we need to think holistically and recognize that, despite the fact that the intensity of the field of influence of our body decreases as the distance from our body increase, this influence is infinite. The forces that move the world are nothing else than these fields of influence colliding with each other — even when it breaks glasses!

What that means in term of design is that architecture, which organize our bodies in space, can be conceived as taking a conscious part in this collusion of fields of influence. Designers/artists Arakawa and Madeline Gins call this holistic consideration for the body and its physical surroundings, Architectural Body (see past article); in this case, the body is no longer defined by its material limits, but rather by the way it composes relationships with its environment. Such an architecture invites us not to be clumsy anymore, but rather, to act like dancers, parkourers, gymnasts, funambulists with our environment, whatever our specific body’s physical abilities might be.