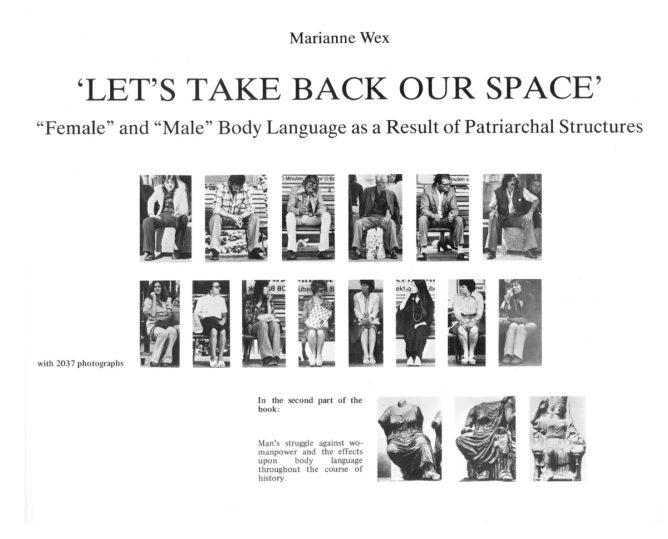 Excerpt of the book “Let’s Take Back our Space”: ‘Female’ and ‘Male’ Body Language as a Result of Patriarchal Structures by Marianne Wex (Frauenliteraturverlag Hermine Fees, 1979).

Regular readers of the Funambulist will have probably noticed the recent recurrence of articles dedicated to questions of body. This finds an explanation in the nature of my current research for an upcoming book that French publisher D-Fiction was kind enough to propose as a project. This book will explore the political relationships a body develops with design (more on that soon).

For once, this article will be more graphic than discursive since the visual power unfolded by German artist Marianne Wex‘s 1979 book, “Let’s Take Back our Space”: ‘Female’ and ‘Male’ Body Language as a Result of Patriarchal Structures, speaks for itself. I also recommend reading Andi Zeisler’s 2012 article for Bitch Magazine about Wex’s work. In the late 1970s, Wex took more than 6,000 photographs of bodies in the street and established an inventory based on the context in which the photographs have been taken and dividing men from women on each side of a virtual line that cuts the totality of the book into two parts. The contrast between genders is graphically striking between the comfortable positions of the male body that clearly attempts to occupy as much space as it is physically possible, while female bodies, on the contrary, — particularly in the presence of male counterparts as Wex points out —  adopt positions that minimizes their occupation. Understood in the logic of a unique occupation for each body that exists (the scheme of the radical-necessity of occupying one and only space at a given moment, and that this space can be occupied only by one body at a time), Wex’s photographs provides us with a clear demonstration that the male body adopts a colonial attitude in the optimization of the space it can physically occupy — and therefore prevents another body to occupy it too — whereas the female body adopts a self-restraining attitude in its reduction to the minimum of space that it can physically occupy.

In terms of visibility, and if we go back to the image of the body as a topological surface (see past article), we can also say that the female bodies on these numerous photographs present a surface folded in such a way that minimizes its appearance, while male bodies, on the contrary expands this surface in a maximization of the visible area — Wex notes that the only time she saw an iconography with female bodies adopting the same positions, it was always addressed to a male audience and a sexual objectification of the female body. A brief look at these recent photographs in Swedish collective transportation (referred in Zeisler’s article) is enough to understand it. As the title of this book implies, Wex attributes such a dichotomy of body language to Western societies’ patriarchal structures that captures a body and places it within normative processes early on in life.

The second part of the book is shared between an experimentation that consists in asking female and male bodies to adopt successively the archetypical female and male positions observed in the first part, and a historical-anthropological study of sculptures of ancient civilizations (Egyptian, Greek, Roman and Medieval European) in order to attempt to distinguish similar gendered patterns in past patriarchal cultures.

All following images are excerpt of the book “Let’s Take Back our Space”: ‘Female’ and ‘Male’ Body Language as a Result of Patriarchal Structures by Marianne Wex (Frauenliteraturverlag Hermine Fees, 1979).