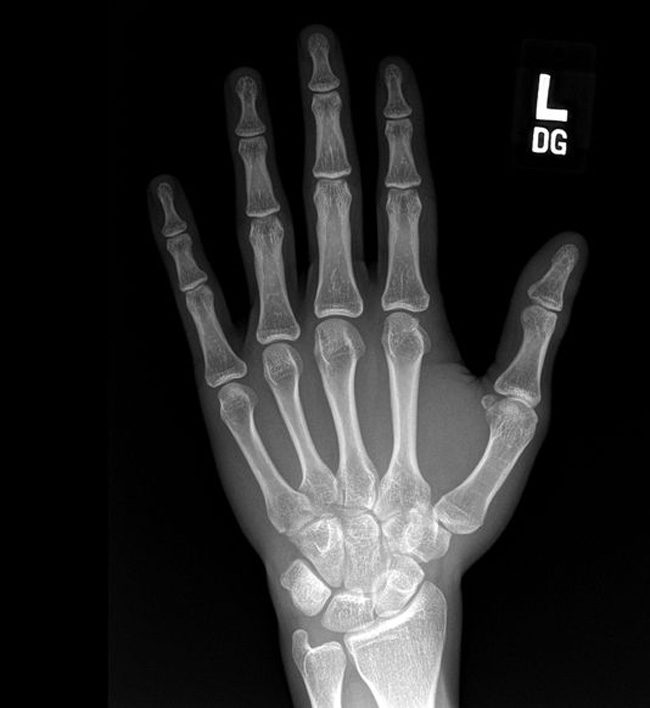 Yesterday (May 8, 2014), newspaper Le Monde published an article written by Delphine Roucaute, about the method used by French immigration services in order to judge whether an undocumented body is younger or older than 18 years old. The difference is crucial to the fate of this body who would be unconditionally authorized to stay in France and offered services if determined younger, but expelled from the territory if determined older. The method used to reach such determination is a bone radiography examination of the hand. Such examination called Greulich-Pyle has been created between 1931 and 1942 and led to observations that subjects younger than 18 years old still had cartilage around hand bones. The legal examination of migrants’ hand x-rays is thus observing the presence or not of this cartilage and determine the fate of these bodies based on it.

Such method is highly problematic for numerous reasons. The first and most obvious one consists in the assumed simultaneity of legal majority with anatomic majority. A body becomes legally major through the threshold that its birthday constitutes. On the other hand, the presence or not of cartilage on the hand bones is gradual, and could not possibly correspond to a legal age. In this matter, doctors estimate that the margin of error for such an examination is about 2 years. This means that an actual 16-year old body could be determined as no-longer minor. Furthermore, we learn in the article that the Greulich-Pyle method has been determined uniquely on American middle-class youngsters in the 1930s. One does not need to be anatomist to understand that the migrant bodies, who often come from precarious populations of South Asia, Eastern Europe and Africa could not possibly compare with these caliber bodies when such a precised observation is required. Once again, the normative body imposes its characteristics on others (see past articles).

However, the most important problem that such method causes is not related to whether the test is reliable or not. Insisting too much on this question legitimates de facto this method since it implicitly recognizes that if the test was indeed reliable, it would be valid. The most important problem is the collusion of medical practices with nation-state control of population. In this case, this control materializes in the potentiality of expulsion of bodies from the territory on which it is implemented. To put it simply, when a doctor is required to accomplish this examination, (s)he is legally acting as an expert and the fate of the migrant is absolutely determined to her/his report. Whatever this report might be, and whatever choice the doctor has made — to falsify her/his observation for example — (s)he exercises a power over a body that is not and should not be part of her/his profession. When we say “knowledge is power,” we don’t always realize how true this phrase is. The notion of expertise is highly problematic in that it gives its exerciser a position in society that can potentially be highly consequential on other bodies.

We know all too well — or do we? — where the association of medicine with ideological politics lead us historically. The medical quest for knowledge, when associated to imprisonment or death penalty during the 18th and 19th centuries (see past article), or to the Nazi torture and death machine, has been the most efficient (because expert) tool for contradicting absolutely its original function. Often this collaboration is not as extreme as the two examples given here, and medical experts’ interventions appear as less consequential — the collusive problems of Western NGOs in non-Western countries are particularly illustrative — yet, a medical expert always to have to go back to the primal question of her/his profession: does this expertise benefits or not the body subjected to its power? In the case of the migrants’ hand bones examination, the answer is simple: no, it isn’t.