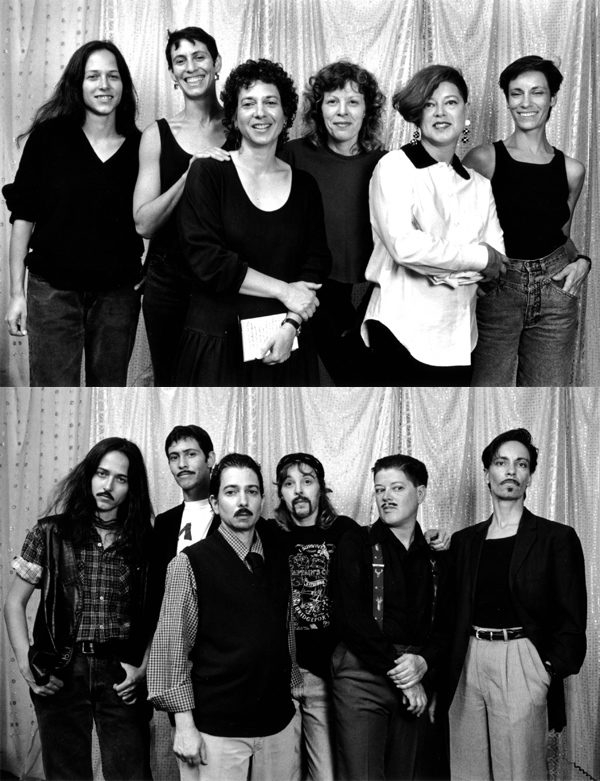 The principle of the drag king consists for a body recognized normatively as a woman to embody archetypical male characteristics to experience society from the point of view of a body closer to the norm. This transformation involves a change in fashion, accessories, facial hair, haircut, but also in the very behavior and posture of the body. Workshops proposing to female bodies to embody a male one exist in different versions. The “Man for a Day” workshop created by artist Diane Torr have been organized in many cities of the world, allowing many female bodies to experience the unusual absence of scrutiny on their body, as well as the freedom to behave more confidently. It is introduced by Torr herself as such:

Maybe during a lifetime of observing men in your neighborhood, on the subway, in the office, in cars, in your home, etc., you have a curiosity about how men “get away” with certain behaviors that would be considered undesirable or socially unacceptable in women. You might want to experience the transformation from female to male as a way to intercept your so-called “normal” behavior as a woman, and discover new responses. (http://dianetorr.com/workshops/man-for-a-day-workshop/)

The notion of “getting away” with things is precisely what characterizes a higher position in the relations of power: the impunity of behaving in a socially unacceptable manner without having to be accountable for it. The idea behind the workshop is not really to give access to this impunity to more bodies, but rather for bodies that don’t normally have access to it, to experience it, and thus to understand its precariousness if challenged.

In the book Testo Junkie: Sex, Drugs, and Biopolitics in the Pharmacopornographic Era (see past article), Beatriz Preciado recounts hir own participation to one of this workshop in 1998 at the New York LGBT Center (my translation):

We dress with men clothing, we learn to fabricate a packing with condoms filled with cotton and to bandage our chests. By flattening the chest, and by fattening the pelvis, we modify the corporal axis and the equilibrium between the shoulders, the arms and the legs. Thus, the corporal gravity center — culturally situated for women at breast height (site of sexualization par excellence and focus point of the hetero-male gaze) — moves toward the pelvis. The legs slightly spreading, the increase of distance between the feet reinforce the double-support sensation of the body. Once the verticality is consolidated, the freedom of movement of the torso, as well as the extension of the arms is amplified. (Beatriz Preciado, Testo Junkie, Paris: Grasset, 2008, 315.)

Although Preciado then describes the operation during which a female body can make a credible mustache/beard, it is important to remain with this previous quote and the care attached to the posture and things that first appear as subtle like the gravity point of the body. However, the idea of posture and behavior is deeply linked to the claim made by Judith Butler that gender is nothing else than a reiterated public performance (see past article). The way a body appears to the public — both in its inherent characteristics and its fashion — is fundamental in this performance, as it offers (deliberately or not) recognizable signifiers for normative processes to categorize this body. However this appearance requires posture and behavior to really acquires a performance similar to what the norm ‘thinks’ gender should be. I deliberately write “similar” and not “exact,” not because a drag king would be less able to reach the norm than another male body — if anything, they might be more able to reach it than other male bodies — but rather because the ‘perfect performance’ that gender as a normative category embodies is not fully incarnated as I often argued through the notion of idealized normative body. The poorness of the performance for male bodies is immediately sanctioned verbally by derogative comments or insults that associate the concerned body to the female or queer body. What the figure of the drag king — and for that matter, the drag queen just as much — creates, is the hijack of the normative mechanisms in their attribution of categories upon one body. When a system gets hijacked, its needs to redefine itself, and when doing so, it allows a short moment of fragility. This is also true when gender gets hijacked.

Watch the trailer of the film Man for a Day by Katarina Peters about the workshops created by Diane Torr: