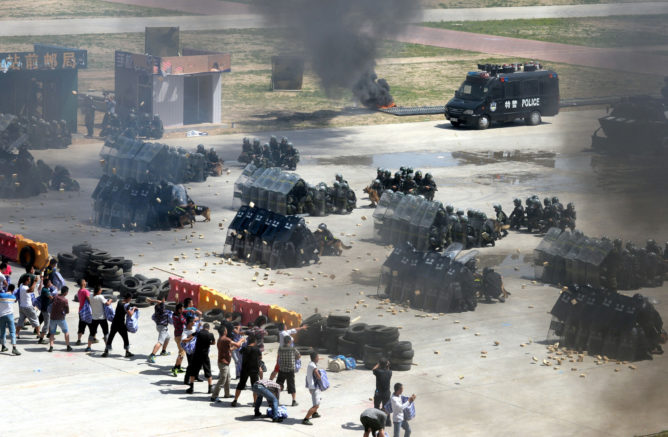 Léopold Lambert – Paris on May 26, 2015
If you enjoy articles of the blog, have a look at The Funambulist Magazine!

I recently encountered a video showing a 2011 South Korean anti-riot police drill (watch it below), which I found revealing enough to try articulating a few thoughts about it. Drills are interesting because they offer us a clear vision of the way the police sees itself, sees insurgent bodies, and sees the built environment that surrounds it. This specific video (for a quick watch of it start at 2:20) is particularly illustrative of such a vision, and I propose to examine these three dimensions through it here:

INSURGENT BODIES: Whether they wave banners, kick policemen, hit them with sticks — they do not seem to aim at anything else than their shields — or throw molotov cocktails at them — thus triggering a particularly burlesque troop movement (see 5:30) — the insurgent bodies (probably enacted by other policemen) are represented as soulless mechanistic bodies only able of a limited amount of actions, continuously repeated. This vision not only represents the way counter-insurrection forces consider the bodies they find in front of them (what is written on the banners or screamed by the revolted bodies is irrelevant), it is also an operative narrative that needs to be continuously produced in order for the policing action to be legitimized. In other words, for the authorities, the encounter between the police bodies and insurgent bodies should not be a political one: because insurgent bodies are systematically depicted as simple mechanical (violent) assemblage, the political convictions and principles of individual police bodies cannot be engaged.

COUNTER-INSURRECTION BODIES: On the contrary of insurgent bodies, police bodies skilfully move with a discipline and a fluidity that reminds us of a ballet (see 4:05). It is however a ballet that falls in love with its own image, enjoying the swift way with which its opponent is abashed by its action. In the specific video of the South Korean police, as well as in the one of the Chinese police shown above, it romanticizes itself to the point of adopting the antic formation of the phallanx, created by the Greek city-states’ hoplites: a tightly grouped formation organized in rows gradually replacing each other in a succession of defense and attacks. The police thus pictures itself in a sort of “portrait of the artists as a Greek Hero,” which certainly adds to the narcissist self-glorifying characteristics of its action.

BUILT ENVIRONMENT: Although the built environment certainly constitutes a substantial weaponized dimension of any political encounter, and that a state-controlled environment will always facilitate the violent intervention of its suppressive avatars like the police, this dimension is particularly absent of the drills observed here: streets are only represented by large roads with no adjacent buildings framing them. A few objects here and there (a kiosk, a flipped car, a few lines supposed to represent facades, etc.) attempts to bring the materiality of the built environment, without attributing any crucial role to them. This might be a substantial difference between anti-riot polices and military forces that supply us with plenty of instances of its weaponization of this environment: from 19th-century French Marshall Bugeaud and his manual La guerre des villes et des maisons (see past article) to Israeli Brigadier General Aviv Kochavi’s infamous “infestation” of Palestinian refugee camps as analyzed by Eyal Weizman, as well as the various training sites of various armies (see Chicago for the Israeli army, and this great research by Maeve Elder about the U.S. army’s sites for instance). Just like for the police drills, these sites carry the symptoms of discrepancy between what they actually represent and the way they are actually represented (through outsider biased imaginaries). In this regard, we can recall this great article written by Mimi Thi Nguyen on Threadbared about the clothing (another dimension of the built environment) used in U.S. military drills, and the production of a military subjectivity of their reading through these drills.

CONCLUSION: It is obvious that the way things unfold during police and military drills and the way they do in other conditions than a represented situation are fundamentally different, precisely because of this discrepancy operating between the ideological representation and the ‘reality.’ In this regard, we might want to remain with the South Korean anti-riot policemen, and see how they recently happened to be surrounded by the determined protesters (see photo) gathered to force the government to make public the conditions in which 304 people (many of which were children) died in the April 2014 ferry accident. The narcissist look of the police on itself during the drill could then no longer occur, and the political encounter was thus made possible between insurgent bodies and police ones. The ideological conditions that form the mirror in which counter-insurrection bodies (but also all other bodies) looks at themselves cannot be fully dissolved; yet, we can think again of these Ukrainian women protesters holding as sole weapons in front of the full-geared police, these simple mirrors in which we can read the fundamental doubt of a policeman, perhaps realizing that he might be on the wrong side of the uniform (see past article).