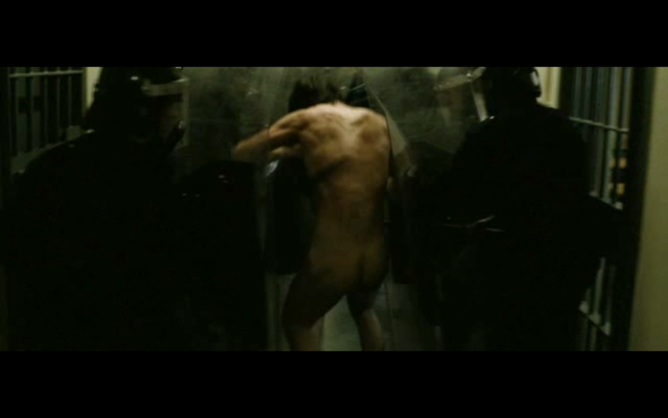 Still from Hunger (2008) by Steve McQueen

In 1976, the British government withdrew the status of political prisoner to every detainees who had been imprisoned for having taken part in the Northern Irish conflict. On March 5, 1981, British Prime Minister Margaret Thatcher delivered a speech in Belfast stating the following:

The refusal to attribute this status to prisoners forces them to wear a uniform, do some prison work, and prevent them from association with other prisoners but more importantly, it denies the very essence of each convict’s action accomplished within the frame of an ethical collective narrative, and not for individual opportunist purpose. The point of the following article is to show how the Republican prisoners’ bodies constituted the unique site of both resistance in torture in the actions that were undertook following this governmental decision. In order to do so, I will use screenshots that I made from Steve McQueen’s film, Hunger (2008), about which it is not question here to make a critique. Some of the following images, although recounting historical events are fictitious but are quite graphic for some of them; I therefore recommend cautiousness to sensitive persons. I add to this film, two more references: the well-documented website Prisons Memory Archive, as well as the three radio broadcasts that “La Fabrique de l’Histoire” released last week about Northern Ireland (France Culture).

The first form of resistance against the refusal to be attributed the political prisoner status consisted for the Republicans to refuse to wear the carceral uniform, and thus remain naked with only a blanket as cloth. Through several articles on this blog, we saw in the past how wearing a certain cloth could constitute a form of resistance against normative or authoritarian processes. In the case of the Irish Republicans however, the “blanket strike” consisted in the refusal for any cloth, expressing by the high discomfort (cold, dirt, lack of intimacy, etc.) that such choice involved, the determination to obtain this status. There is a high symbolism in the refusal to wear the clothes that are imposed by the carceral authorities: the violence of the prison walls’ inescapability is already highly present; the cloth would also carry a violence, even closer to the body itself and refusing to wear it constitutes an attempt to avoid it.

)In 1978, another strike was enacted: the “no-wash protest,” or “dirty protest,” which consisted in the refusal for the Republican prisoners to refuse to wash and to use the toilets, access to the bathrooms being granted by the wardens. Both in Long Kesh men prison and in Armagh women prison, prisoners spread their excrement on their walls — as well as their menstrual blood for women — and urinated under the doors of their cells. The notion of abject is particularly striking here whether by the fecal and menstrual matter that formed the direct environment of the prisoners’ bodies, or by these bodies themselves, dirty and smelly as they were. As we saw in a past essay, the ability for bodies and matter to reach abjection has consequential political effects: they embody a repugnance for other bodies, and as “matter out of place” (Mary Douglas, 1966), they disrupt the order of the system in which they are embedded. One could think that there is a paradox in seeing prison wardens forcefully washing the prisoners’ bodies (cutting their hair, plunging them into a bath, etc.), as well as regularly cleaning the cells’ walls. There is none however, for the reasons given above. It constitutes an attempt to annihilate abjection, its imaginary, and the disruption it enacts.

Bodies are sites of resistance are total. Even the transmission of messages and other miniaturized objects is made through them. The orifices of the mouth, the anus, and the vagina were used as dissimulated transportation vessels whether to exit documents from the prison — like Bobby Sands’s poems for example — or to enter it. Miniaturization as a form of dissimulation operates here at its climax: messages are written as small as possible — in another geographical and historical context, one can think of Sade’s 120 Days of Sodom written on a single roll of paper in prison (see past article for more similarity with Sade) — objects need to be reduced to the minimum to fit the size of their transporting vessel, etc. These methods being known and anticipated by the prison wardens, violent bodily searches of orifices are regularly conducted.

The third strike that was enacted by the Republican prisoners was a deadly one: hunger strike. The first one, accomplished by Bobby Sands — represented by McQueen in Hunger — started on March 1, 1981. Margaret Thatcher and the British government systematically refusing to grant the political prisoner status to the Republicans, ten men will die consequently from this refusal associated to their determination to pursue their strike until the end. We often associate the difficulty of hunger strike to hunger itself as the materialization of an intuitive need. However, what McQueen’s film shows well is rather the consequences that the absence of nutrition triggers on the body. After three weeks without eating nor drinking, the muscles and the bones of a body begin to substantially deteriorate. After 66 days of strike, Bobby Sands’s body ceased to perform vital functions.

The few years that followed the 1976 withdrawal of the political prisoner status in Northern Ireland was thus exemplary in how the carceral violence put bodies at war and make them become sites of resistance and of torture. Many Republicans prisoners did not present any defense when being tried and convicted, refusing by doing so to recognize the legitimacy of the British court (see past article about Jacques Vergès’s ‘rupture defense’). Their bodies were forcefully placed into a carceral architecture from which no escape seems conceivable. However, by using their body in their nudity, in the matter they secrete, in their ability to transport objects, and in the possibility to become the expression of their voluntary slow deterioration, Republican prisoners used the available means — what is more available than our bodies? — to pulverize the role that was thought for their instrumentalization. By doing so, they also accepted that the violence developed to break their efforts will be directed at the very weapon that they were using, that is their bodies.