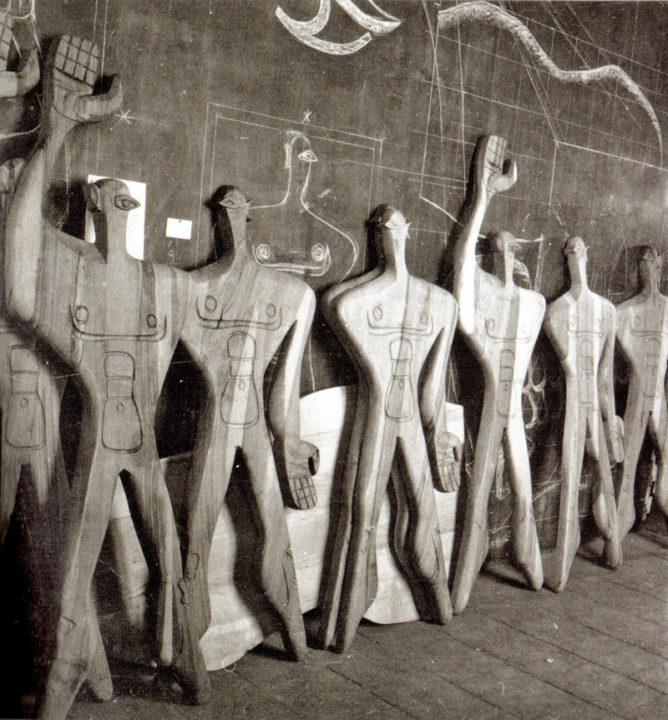 Léopold Lambert – Paris on May 1, 2015
If you enjoy articles of the blog, have a look at The Funambulist Magazine!

2015 is the year of the 50th anniversary of Charles-Edouard Jeanneret aka Le Corbusier‘s death. As usual, this kind of dates triggers a series of cultural production, the main one being a large exhibition at the Pompidou Center in Paris, and another is the involuntarily synchronized release of three books excavating the relationship of Le Corbusier with fascism: Un Corbusier (A Corbusier) by François Chaslin (Seuil), Le Corbusier: Un fascisme français (A French Fascism) by Xavier de Jarcy (Albin Michel) and Le Corbusier: Une froide vision du monde (A Cold Vision of the World) by Marc Perelman (Mochalon). Through his biography, as well as his private correspondence, these three authors establish unequivocally that Le Corbusier was keen with antisemitic and fascist ideas. Although I can only recommend articles written in French about them (see the interview of François Chaslin by Mediapart for instance), it is not in my interest to reflect on any aspect of his biography. I believe that it is important that this excavating work has been done and it is currently eagerly relayed, but judging the person of Le Corbusier, especially with such unequivocal evidences, is easier and less useful, than judging his architecture in its complexity, and the vision of society it envisioned and actually produced: although modernism is not the invention of one person, nor of one discipline, we can reasonably think that without his work, our cities would not look exactly the same today.

Although the approach of Olivier Cinqualbre and Frédéric Migayrou in the Pompidou Center exhibition does not attempt to propose any level of critique to Le Corbusier’s work, the curatorial choice centered around “The Measure of Man” certainly allows us to articulate our own. An entire room is dedicated to the Modulor in its multiple variations: numerous drawings, a scale-1 sculpture, and even customized tape-measures that allows to apply the modulor’s system of dimensionning to all things. Although Le Corbusier insists that the Modulor is a proportional system — something that would mobilize an aesthetic debate rather than a societal one — he calibrated this system on a normative 183-cm male (“The Measure of Man” takes its full expression) body, which will then have consequences on the totality of his design and architectural work, and thus on the city itself (especially in the case of Chandigarh). I already articulated several times a critique of such a calibration whether in Le Corbusier’s or Ernst Neufert’s work (see one of the past articles) but also through the gendered normative bodies of Joe and Josephine in Henry’s Dreyfuss’s design; yet, this calibration exists at a more of less conscious level, in all design, and we thus need to keep researching what politics lies behind this practice.

In order to examine this project (and thus the vision proposed through Le Corbusier’s work) we might want to look at the documents produced for the Modulor without its accompanying commentary by their author. By doing so, we try to withdraw any influence from the notion of intent, since such a notion becomes irrelevant once the creative production affects other bodies. What we see on many of these documents are thus bodies whose surface is surrounded by ubiquitous threaded dimensions that make them look like puppets (an evidently not innocent visual observation). From there, it is difficult to know whether this dimensions comes ‘after’ the body insofar that they would be neutrally dimensionning something given to them, or if they come ‘before,’ which would then mean that the body is the project, this material assemblage that we will try to fit within pre-established dimensions. This is, in my opinion, where Le Corbusier’s embrace of a fascist vision lies: in the manufacture of a body that he could call “the man of tomorrow.”

Let’s be clear, I do not (only) refer to an aesthetics of fascism that would contribute to an ideological imaginary: architecture is an instrument that has a strong incidence in the production of such a body. Of course, there is architecture’s program itself that can insist on body forming and hygiene functions; many people have written about it, including in the Pompidou Center exhibition’s catalogue (see the piece by Rémi Baudouï and Arnaud Dercelles). However, this is not all: architecture will affect bodies with an intensity proportional to their corporeal difference with the projected body, and the attempted adaptation to the designed environment will thus necessitate a proportional effort of the same intensity. In other words, architecture calibrated on a normative body constitutes a bending machine (a word that Le Corbusier attributes himself to his buildings) that attempts to force each body to become the projected body.

In order to avoid using the term fascism too lightly, we fundamentally have to insists that there is no such thing as a “natural body” that would be tortured to become the artificial body projected by Le Corbusier or anyone else. A body’s environment is continuously affecting and thus forming this body (and reciprocally) and we first have to examine these affects in a pre-political manner (pre- refers to the method here, not to some sort of time that would precede the politics) before investigating the ideological charge of the way these affects are organized within a society. When this ideological charge corresponds to the manufacturing of a body known and desired in advance — that can be the definition of a design project — we can reasonably reflect on the fascist aspects of such methods.