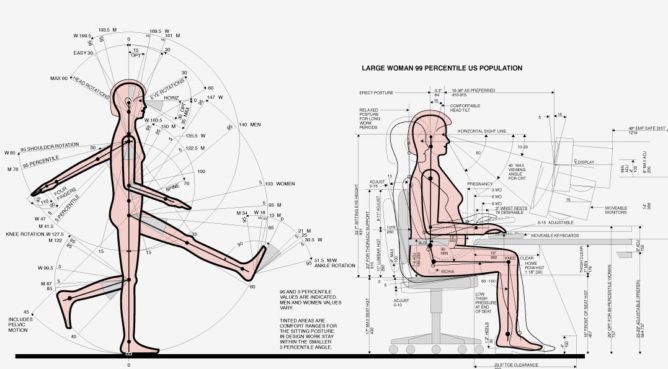 This article is intended to continue a specific part of the research started with Weaponized Architecture: the consideration of a normative body when creating objects and architecture (see other articles at the end of this one). In order to do so, I would like to particularly examine the work of American industrial designer Henry Dreyfuss (1904-1972) in relation to the two malleable standardized bodies he invented and that he found fit to name Joe and Josephine (see scans of the chapter dedicated to them at the end of this article). These bodies are puppets whose threads linked to every part of their limbs are ubiquitous dimensions, each of them claiming to inform a reality.

A first degree of critique is fairly obvious: although these bodies attempt to be descriptive of as many bodies of a given society — I am however not aware of any non-Western example of such systematization — as possible, many others are not included within this standard, and will therefore be in position of discomfort when interacting with objects created based on this system: some will have to bend their heads to pass into a door, others will not reach the hanging handle in a subway car, examples are plethora and each of us have been experiencing it as children at the very least — remember how much effort was needed to climb up a stair!

A second level of this critique consists in affirming that these bodies ‘on paper’ do not actually find any incarnation. Their claim is to represent most bodies, but such a rationale implies a binary categorization between bodies that do conform to them, and bodies that do not. In reality, each body relates to these standard bodies through a specific degree of differentiation. Some bodies reach an extremely small degree of differentiation from these standards, some others incarnate a much higher one. Thinking in terms of degrees (intensities), rather than in terms of categories, allows us to examine the relationship of power between bodies, rather than separating them in two definite classes (the privileged that conforms to the standard and the unprivileged that does not). In other words, the power exercised by a body on another finds its actualization in a different degree of fitness to the environment they share. This means that the environment — whether built or not — and its multitude of ‘objects’ — whether designed or not — are that through which relationships of power are organized. Drawings of Joe and Josephine, as well as their other avatars (Le Corbusier’s Modulor, Ernst Neufert’s Architect’s Data, etc.), are thus creating systems that thoroughly contribute to this organization.

This critique remains however incomplete. It might apply to a system like the Modulor‘s one, since everything in it is informed by a unique set of corporeal values, but Dreyfuss helps us to go further, since Joe is not only accompanied by Josephine, his body is also malleable to incarnate several kind of bodies: one using a wheelchair, a “large” one, a child, etc. By defining Joe’s and Josephine’s bodies in terms of percentile, Dreyfuss appears as having integrated this notion of degree within his own system. Two sentences in the chapter “Joe and Josephine” (Designing for People, New York: Simon and Schuster, 1955) nevertheless strike the attention:

Our job is to make Joe and Josephine compatible with their environment. The process is known as human engineering. (Dreyfuss, 1955, 27. my emphasis)

Even within Dreyfuss’s own system, it is surprising to read that it is Joe and Josephine that need to be compatible with their environment, and not the other way around. Nevertheless, the subsequent notion of “human engineering” prevents us from thinking of a mistake. A hint of what such an engineering might mean is given to us on the same page:

Joe enacts numerous roles. Within twenty-four hours he may determine the control positions on a linotype, be measured for an airplane chair, be squeezed into an armored tank [Dreyfuss used the mensuration of his “GI Joe” when working with the US Army], or be driving a tractor; and we may prevail upon Josephine to do a day’s ironing, sit at a telephone switchboard, push a vacuum cleaner around a room, type a letter. (Dreyfuss, 1955, 26.)

Blaming Dreyfuss for his contribution to a generalized sexism is not the only point that I would like to make here — although we could certainly remark the way he describes Josephine as being “better-looking than the average woman she portrays” (36.). However, it is important to note that the embracing of bodies’ fundamentally various mensurations in the design of objects is not exercised in an attempt of inclusiveness but, rather, in the optimization of each body’s attributed function in society. The notion of “human engineering” thus appears more clearly: it consists in the construction of a situation for which the assemblage bodies plus designed objects finds an optimal functional configuration. In order to do so, it is obvious that the designed objects should be informed by the bodies, and thus the specificity to the function that has been politically attributed to them — in the gendered instance given by Dreyfuss himself, male bodies in factories, vehicles, and at war; female bodies at home or in services. However, bodies are also informed by designed objects and, each day spent accomplishing this function contributes, slowly but surely, to “engineer” bodies to incarnate an optimal apparatus in flesh vis-a-vis the attributed function. It is easy to understand that, in these conditions, the political status quo is incessantly reinforced since the built environment is constantly informed by bodies politically associated to it, themselves evolving as well under the influence of the built environment.

The only means that I can see as a breakage of this logic goes back to this idea of a design that “does not know what a body is” (see past article). It appears that every corporeal violence, such as racism and misogyny, find their ideological justification in a totalizing mode of knowledge of what a body may be. The embrace of our ignorance for this question, and the subsequent design that reflects such ignorance, therefore constitutes, not only a targeted equality between bodies vis-a-vis their environment, but also a reduction of the conditions that give grasp to the relationships of power as explained in the third paragraph. Joe and Josephine are only the most expressive embodiment of a design process that almost always functions through this totalizing mode of knowledge of what a body is; our response as designers should therefore not simply be to refuse any of these systems of standardization but, furthermore, to unlearn what we think we know about bodies and create based on our ignorance, rather than on our ideologically informed knowledge.

RELATED ARTICLES: (because this is an on-going research, these articles might be slightly redundant)

“JOE AND JOSEPHINE” BY HENRY DREYFUSS: