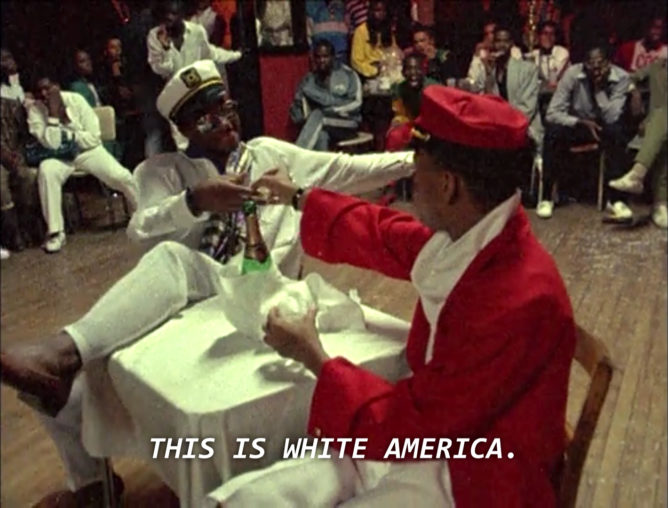 The 1991 documentary Paris Is Burning by Jennie Livingston shows an important aspect of African-American and Latino gay and transgender life in New York in the 1980s: the balls. Organized in Harlem, these balls consist in competitions to judge which body can perform in the “realest” manner, something for which it is not recognized by society. For example, a ball jury would determine which one of the two dark and gay bodies can perform the best as rich heterosexual white body. Similarly, transgenders are judged on their ability to perform as “real” — term used by the jury itself — women.

Fashion is an important component of balls. Some contestants create their own clothes, others struggle to gather enough money to purchase remarkable clothing in relation to the category for which they compete. In this matter, a brief inventory of these categories says much about the variety of the social labels performed: “pretty girl,” “high fashion winter sportswear,” “luscious body,” “schoolboy schoolgirl,” “town and country,” “businessman of the 80’s,” “high fashion Parisian,” “butch queen,” “military,” “high fashion eveningwear…” The balls also invented a new dance at the crossroad of homage and parody of fashion magazines like Vogue: they called it “voguing.” This dance consists in the fast succession of poses systematically adopted by models when being photographed for fashion magazines.

In a quote I used in a past article, Judith Butler describes gender as an act, a repeated performance accomplished in the public realm as a recognizable semiotics:

In what senses, then, is gender an act? As in other ritual social dramas, the action of gender requires a performance that is repeated. This repetition is at once a reenactment and re-experiencing of a set of meanings already socially established; and it is the mundane and ritualized form of their legitimation. Although there are individual bodies that enact these significations by becoming stylized into gendered modes, this “action” is a public action. There are temporal and collective dimensions to these actions, and their public character is not inconsequential; indeed, the performance is effected with the strategic aim of maintaining gender within its binary frame – an aim that cannot be attributed to a subject, but, rather, must be understood to found and consolidate the subject. (Judith Butler, Gender Trouble: Feminism and the Subversion of Identity, Routledge, 2006.)

Harlem balls certainly illustrates Butler’s thesis. The assemblage behavior+fashion+confidence can build-up gender. Bodies that are recognized as male by society can use such an assemblage as a sort of camouflage. Similarly, the balls tend to show us that race and sexuality are also funded on performativity and here as well, camouflages can be created. Although we can think of this idea of camouflage as a way for dark bodies to appear as white bodies or for male bodies to appear as female bodies, we should refrain from this idea as it precisely brings us back to the idea that each body belongs to a category by essence. Rather we should recognize the norm for what it is: a camouflage for all bodies. The norm is performativity since no body fully correspond to the norm. Of course, some bodies (white, male and heterosexual for example) do not need much effort to perform the norm as several characteristics of their public body are already interpreted as symbolically embodying the norm. Others, presenting characteristics that are recognized by the norm as distant from its composition, require much efforts to get closer from it.

What Paris Is Burning reveals both through the presentation of the balls and through the interviews accomplished with its protagonists, is the deep will from most these bodies to reach what they call themselves “normality.” Transgender bodies explain that they want to be normal housewives and dark bodies explain that they want to live like normal rich white people do. One may think that these wills do not constitute strong political manifestos, or that the very will for normality prevents by definition the idea of transgression. However, a body that gives itself the means to hack the characteristics of its public appearance to the point of changing sex constitute an extremely high degree of subversion of the norm’s mechanism, and therefore constitutes a political act in depth. The film provides a tragic proof to such affirmation, as one of its transgender protagonist, Venus Extravaganza, is said to have been savagely murdered within the time laps of the making of the documentary. Thus lies the violence that the norm reserves for bodies that subvert its function. The film is (well) made in such a way that these aspirations for normality affirmed in a somehow trivial manner by its subjects is soon contrasted in the strongest way by this murder that characterizes the risks of trying to be something else than what the norm likes to recognize in your body.