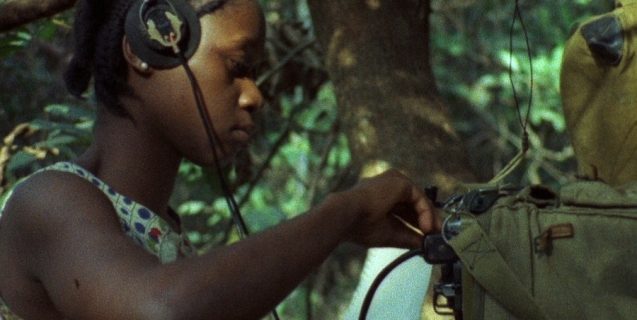 Still from the film Concerning Violence by Göran Olsson (2013)

This article intends to give a personal critique of the usual interpretation of violence in the work of Frantz Fanon, in particular in light of the recent film Concerning Violence by Swedish director Göran Olsson. However, I highly recommend to read friend Bhakti Shringarpure’s own article about the same topic on Warscapes (June 17, 2014) since I could not possibly pretend to articulate these ideas better than she did back then. My approach will nevertheless be slightly different, insofar that it will attempt to link this notion of violence with the various corporeal references made by Fanon in both L’an V de la revolution algérienne (A Dying Colonialism, 1959) and Les damnés de la terre (The Wretched of the Earth, 1961), and noted by David Macey in Frantz Fanon: A Biography (Picador, 2000).

Fanon is well known to have stated numerous times that violence constitutes a necessary phase of decolonization. The interpretation made of such a statement is often systematized through an imaginary of guerrilla warfare, terrorism, and targeted assassinations. Olsson’s movie does not escape from the rule and provides us with fascinating footage of decolonizing combats in several colonized countries such as Angola, Congo, Guinea Bissau, Liberia or Rhodesia (now Zimbabwe). This systematized interpretation does not go against Fanon’s understanding of violence; however, it takes its complexity away from it, in a similar manner than Jean-Paul Sartre did in his preface to The Wretched of the Earth, where he writes “killing a European is killing two birds with one stone, eliminating in one go oppressor and oppressed: leaving one man dead and the other man free.” Accusing Sartre to write from a position of absolute comfort is too simplistic; after all he received several death threats for his position regarding the decolonization of Algeria; yet, the absoluteness of statements made by a metropolitan European reveals the theoretical position (s)he occupies, when a situation on the field like Fanon’s forces to develop a discourse adapted to each situation’s complexity. If we were to oppose Fanon’s decolonizing violence and Gandhi’s decolonizing non violence, we would fall into the trap of an exclusively semantic contradiction. The Indian National Congress Party’s non violence consisted in the strategic refusal to use arms in the independence struggle; yet, the numerous blows at the colonial economy orchestrated in the 1930s and 1940s through the salt march, the local manufacturing of clothes (see past article) and other various forms of disobedience against the colonial legislation incarnated a violence in the radical disruption of the colonial mechanisms. This strategy of violent “non-violence” was not chosen because the population of India had more friendly feelings towards the British colonizers, than the Algerian did towards the French, or the Guinean towards the Portuguese; it was chosen because it was the most effective decolonizing method — of course this is easy to state retrospectively.

The paradigm that envisions violence only through the struggle of an armed group of people against another constitutes an outsider colonial logic, insofar that it keeps considering decolonization as a struggle to gain back a territory. This way of thinking is a cartographic one, a vision ‘from above’ that understands territory as a piece of map on which one absolute sovereignty is applied. The corporeal descriptions made by Fanon are helpful to understand how colonialism is far from being only applied on a territory’s resources — in this sense, colonialism is still extremely operative through globalized industries — but also enacts itself onto the colonized bodies and their daily lives. Throughout The Wretched of the Earth, Fanon talks about the “muscular contraction” of the colonized body, who is “constantly on his guard” (Fanon, 1961, 16.). He describes the colonized body’s dreams — let’s not forget that Fanon was a psychiatrist — as being “muscular dreams: dreams of action, dreams of aggressive vitality. I dream I am jumping, swimming, running, and climbing. I dream I burst out laughing, I am leaping across a river and chased by a pack of cars that never catches up with me” (Fanon, 1961, 15.). In A Dying Colonialism’s first chapter, “Algeria Unveiled,” he presents at length the struggle taking the Algerian woman’s veil for site between colonizers and colonized. Between the colonial policing need to acquire a legibility of the administratized bodies, and the Western male desire of domination of the colonized female, the hijab in 1950s Algeria embodied a corporeal contribution to the decolonizing struggle, and for this reason, a form of violence too.

In order to conclude this article, we can refer to the ongoing movement against the structural anti-Black racism exercised by the American police and society, which uses the last words of Eric Garner before he was killed by a NYPD officer (Staten Island, July 17, 2014), “I can’t breath,” as an expression of the corporeal systematic and daily violence imposed on Black bodies. This notion of breathing (or, rather, of non-breathing) recalls the one of “combat breathing” created by Fanon in A Dying Colonialism:

Bodies and the administration of their breathable atmosphere (see past article) are thus what are at stake in the colonizing and decolonizing combat. The decolonizing violence does not only comprise bullets and bombs, but also the various means that forces out the colonial control on the colonized body and its individual and collective ‘biosphere.’ Economic, legal, cultural, sartorial, social radical disruptions therefore constitutes as much a valid emancipatory strategy as military means do, depending on each situation, and each phase of decolonization.