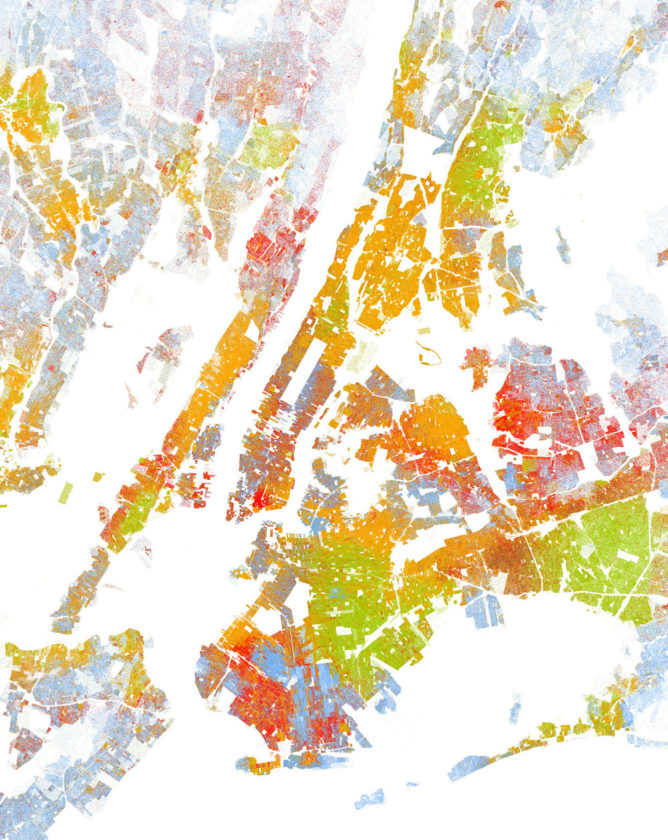 In a city like New York, gentrification is one of the main social and racialized violence that is currently at work. Brooklyn neighborhoods like Williamsburg, Bushwick, Green Point, Bed Stuy or Park Slope are experiencing it at speeds that makes it impossible to attribute this process only to immanent causes. Its origin that consists in a reduced amount of middle-class often white people moving in a lower-class often black or Hispanic neighborhood might be immanent indeed, although it is also motivated by prohibitive prices in other parts of the city, but this displacement is quickly identified, then multiplied at much larger scale by profit-driven developers.

Gentrification is implemented through bodies choosing to locate themselves (as usual, our body can only locate at one space at a time, and only this body can be located on this specific space) in a space where they are historically, culturally and racially outsiders. The presence of these bodies exercises only a violence when it triggers a disruption in the modes of existence of the local population. Bodies rarely come alone indeed: they bring with them standards of comfort that modify the urban fabric and drastically increases the price of life (rent, goods, services, etc.) to a point that it becomes prohibitive and thus exclusionary to the local bodies. The gentrifying bodies also carry with them the promise of safety that society made to them. As Spike Lee argues in a diatribe that I will evoke below, there is therefore a retrospective legitimate frustration from the local black or Hispanic population to see that the thing that will effectually bring the police to secure a given neighborhood is the presence of white bodies.

There is an architecture of gentrification that crystallizes this need for the gentrifying bodies to bring with them their standards of comfort. This architecture involves a certain amount of commercial and leisure facilities (count the amount of wine stores and trendy cafes in a given neighborhood to have an idea of its state of gentrification), as well as the housing itself. As far as the latter is concerned, it goes from the renovation of existing building to their absolute destruction to be replaced by luxury condominium apartment complexes. In the specific case of Brooklyn, there is also another specific architecture that propagates: defensive massive housing blocks with large balconies that spread the limits of the Hasidic Jewish districts. In this latter example, the scheme of gentrifying violence is however different as it corresponds to the territorial growth of a community that has been living in these neighborhoods (Williamsburg in particular) for the last seventy years. The effects of local population displacements that it triggers are however similar.

The colonial characteristics of gentrification are summarized by Spike Lee in his answer to a question about the “positive aspects” of this process when he was invited to speak at the Pratt Institute on February 25, 2014 (see the recording below). He calls the tendency that gentrifying white bodies have to speak of their new neighborhood as some sort of “discovery” as the “Christopher Columbus Syndrome” in an obvious reference about the fact that there was various indigenous populations living on the American continent before its European discovery in the 15th-century. The various genocides of this native population that followed then constituted a most violent attempt to deny this previous existence of bodies on this land.

Let it be clear: the mix of social and racial population is not the object of dissension here. Such a mix is actually what allows the reduction of antagonism in the daily encounters of the bodies. Despite what many good (white) souls seems to think when they talk about these “positive aspects,” this mix of populations is however not the goal of gentrification, it is only a temporary effect in between the beginning of this process and its end that sacralizes the gentrifying body as the new owner of the land. The colonial aspect of gentrification is exercised in the fact that the gentrifying body refuses to bring with it this baggage of comfort and way of life. Now, this rhetoric is also used by the various right wings of Europe to talk about their immigrations. The difference is however easily distinguishable and deny any legitimacy to the recurrently claimed feeling of “invasion” that these politicians nourish: the gentrifying body, on the exact contrary of the migrant body, is recognized both socially and racially by the norm as the dominant body to which privileges have to be granted. It belongs to each of these bodies to recognize and accept its responsibility in the processes of violence in which it finds itself involves.