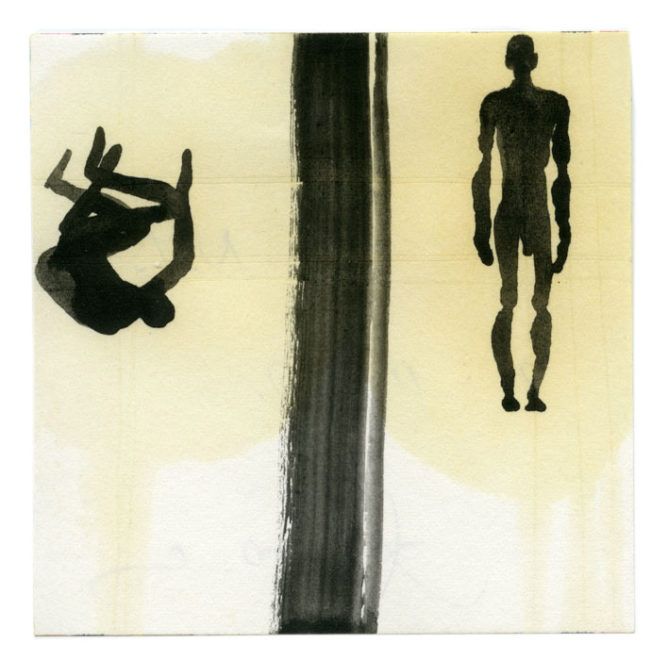 The following text was written for a roundtable seminar entitled Design, Politics and the Question of Form organized yesterday at the department of design of the New School (New York)  by Mahmoud Keshavarz (listen to our past conversation on Archipelago) in company of Clive Dilnot, Victoria Hattam, Orit Halpern, and Otto van Busch. Writing this text allowed me to formulate retrospectively in a somehow non-anthropocentric way, the basis of my forthcoming book, Topie Impitoyable (D-Fiction, 2014), and/or can be seen as a reformulation of Weaponized Architecture‘s thesis in a synthetic — and more material — manner:

The first axiom of the following text is that everything is material. What we call immateriality in our experience – in the experience of thinking for example – is simply a misunderstanding of the material agency of that we call “immaterial.” The second axiom consists in recognizing the impossibility for what we commonly define as “essence” to exist. There is no essential difference between a dog and a cat, nor is there between a molecule and a star. The differentiation between the various material assemblages that compose the world – that are the world – is strictly a differentiation of intensities, continuously varying and always unique.

In order to make such propositions, we will have to think in a non-anthropocentric manner. It is a particularly fashionable method to use, and also a dangerous one as it has the potential to make the political dimension of the relationship between bodies and objects disappear if considered too lightly. In other words, an extremist non-anthropocentric reading of the world would have the discursive complaisance of affirming (implicitly or explicitly) that history and its multiple genocides correspond only to the movement of a few atoms, negligible in comparison to the infinity of matter of the universe. Such rationale would absolutely forget the political conditions that produces it and would satisfy itself with verbal vertigos without taking the risk to make propositions.

No need to use complicated words to explains the violence between bodies and objects that the title of this text suggests. Let’s consider two material assemblages that we know well: what we call a wall (any wall for the moment) and what we call a body (any body for the moment). The wall occupies a space in the world and so does the body. This occupation is potentially violent since if the body ‘wants’ – admittedly the notion of will is rather odd in this examination – to occupy the space that the wall currently occupies, it will deploy energy to ‘push’ the material parts of the wall to another space to occupy. This is what we do, as bodies, when we move: we push the air particles and force them to reconfigure themselves in the space that they can occupy. What is ‘easy’ – i.e. what requires an affordable sum of energy for a body – to do with air is much more ‘difficult’ with a wall and, as body, we all have the experience to knock ourselves against a wall and experience the bruises as a form of testimony to this violent encounter.

So far, we have not considered any form of intentionality within this scheme. Both the wall and the body were here for no particular reason, hence the oddity of involving the notion of will as mentioned above. However, what is a wall? A wall is a material assemblage that has been designed and there cannot be any design without intentionality — In French language, “dessin” (= drawing/design) is pronounced the same than “dessein” (=goal/intention). We should not simply understand design as the practice of a body that we traditionally call “designer,” but rather, the totality of the political project in which an object and its effects on the bodies are being considered. The politician, the legislator, the economist, the voter, the speculator are involved in this process in the same regards than “the designer” proper.

The realm of the law is particularly interesting for that matter. Consider any wall around you when you are reading these words. The chances are high that this wall materializes a legal regime that we call “private property.” From Romulus digging his trench around what will become the city of Rome to the overwhelming majority of walls framing our streets, walls, understood as spatial separation apparatuses – a trench can be thus said to be a wall – are keeping bodies in the milieu of one of their side only, literally “outside.” The situation is actually more complex than that, and that is what makes it political: some bodies are granted access to the “inside.” So far, we have not examined how a body could possibly ‘cross’ a wall since crossing it requires to temporarily occupies part of its space, which is difficult as we saw above. An important component of the act of designing consists in integrating to it, an apparatus that regulates the porosity of the wall. This is what we call a “door.” A door is a piece of wall that can pivot or slide in such a way that a body using it does not require encountering its matter when crossing it. An additional apparatus was however added to the door, one that is able to filter the bodies that are designed to be granted access to “inside” from the unwanted ones: this is what we call a “lock,” and its exclusive solution, a “key.”

Private property is however not the only legal regime that is materialized by the wall. These regimes are multiple and specific to the political conditions of their production. A prison cell, for example, operates in the inverse way of private property. It surrounds a body on which has been unfold a certain legal regime – the one reserved to bodies recognized as transgressor of the default legal regime – and organize the materiality of its space in such a way that this body, in the controlled absence of tools, cannot afford a sum of energy large enough to modify the structural integrity of the walls and thus cannot ‘escape’ from the space it is situated. In this matter, it is interesting to observe that the necessary energy to modify the material composition of the wall does not need to be spent “all at once,” but can be spread in time as a sort of eroding force like the example of the little spoon digging the prison wall illustrates.

Prisons are material assemblages – something we call “architecture” – that have been designed specifically and explicitly for the function described above. Their aesthetics – the symbolic semiotic they embody – deliberately expresses this function. On the other hand, other architectures like houses embody a different aesthetics, one that attempts to articulate simultaneously the exclusivity of their access to their “owners” – the bodies that benefits from the legal regime of private property – and their accommodative function. The material agency of space that enforces private property using the strategy discussed above carries however in itself the potential deployment of the violence of walls on the body they host and “protect” in the context of scenarios where the operability of the doors are somehow compromised, or more dramatically, if other legal regimes emerge and require bodies to remain inside the walls, like in the cases of curfews, states of emergency, manhunts and quarantine. In these scenarios, the walls that were preventing bodies from the outside to penetrate inside, now prevent bodies inside to have access to outside.

The walls are also well-known to materialize the limits of nation-state territories. Here again, some bodies are being granted the access to the two milieus determined by the wall and some others are not. In this case, it is no longer a key that determines which body is acceptable from which one is not, but it is another object, an individualized marker allowing the traceability of information about the concerned body: a passport (studied extensively by Mahmoud Keshavarz). Often, bodies who have been granted access to the milieu of their choice are characterized by the punctuality of their passage for many years; these characterization extending even to their filiation. They are what we call “immigrants.”

Here again the walls are crystalizing the defensiveness against bodies coming ‘from outside.’ Nevertheless, there are some material occupations that enforce the institutional presence of bodies that claims their ‘belonging’ to a given nation state in a milieu where other bodies – usually visibly distinguishable from the others – do not recognize the legal regime established by the newcomers. This regime is what we call “colonialism” and usually sustains the design of social and economic exploitation of resources, objects and bodies.

All occupation is fundamentally political as each body and objects can only occupy ‘one’ space at a time, and only this body or object can be the entity occupying this specific space at this specific time. Such exclusivity could not be effectuated without a certain agency, an immanent or transcendent organization of who/what occupies where and at what time. What we call politics is precisely this agency. All occupation is therefore political but not in the same intensity. The political intensity of a given occupation is proportional to the degree of antagonism between bodies and objects created by this occupation. As an example we can consider a body who is recognized by the State of Israel as a national citizen. When this body occupies the space offered by a chair in a café of Tel Aviv, its occupation has a lesser political degree than if it occupies the space offered by the same chair in a building of the settlement of Ariel in the West Bank. Similarly a body identified as white and presenting an appearance that informs its belonging to a privileged social class does not occupy with the same political intensity the space contained by a wine store in SoHo than one in Bushwick.

What does that all mean for our potential participation to the act of design? If we accept the two axioms enunciated at the beginning of the text, and do not find errors in the deployment of the propositions that followed them, we are placed in front of the inexorability of violence. We are not used to incorporate violence within our ethics. This is because we do not see the violence that our inaction allows on a continuous basis. Violence does not necessarily unfold itself through immediate causality – if a body hits another for example. Because violence is inescapable, trying to escape from it will prevent us from controlling the conditions in which it operates. On the contrary, we should learn how to use it and orient it towards the agency of bodies and objects that our ethics envision. The political intensity of this agency – and therefore of production of antagonism – should be proportional to the degree of power that is being exercised against it.