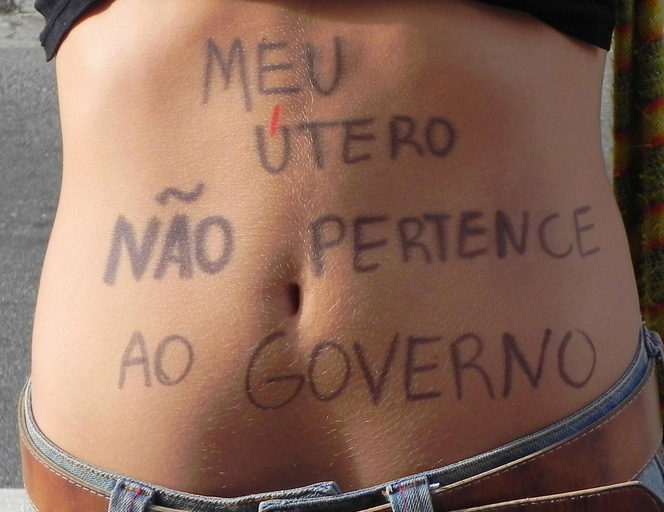 Last Friday, Beatriz Preciado (see the several past articles) wrote a column in French newspaper Libération calling for a “strike of the uterus” in Spain in reaction to the law that will soon be voted (and likely approved) by the Spanish government to limit the right to abortion to only extreme cases. I translated this text at the end of this article but I would like to talk about it first. Although Preciado does not talk about it as Libération’s readers might have been slightly puzzled by this depth of theory — it used to be a good newspaper — she certainly attributes this return to the legislation before 1985 to a dimension of what she calls the “pharmacopornographic society.” Generated from Michel Foucault’s “society of control,” the pharmacopornographic society corresponds to a biopolotical mode of governmentality in which the sexuality of its bodies is controlled through the capitalist production of drugs and spectacle.

The Spanish legislation is a Church-backed act of colonialism on the female body as it considers the uterus as a strict organ of reproduction of bodies to form the manpower and consumers of tomorrow. Higher social classes will have indeed not too much trouble receiving an abortion abroad, while the lower social classes won’t have this luxury and will have to go through extremely risky clandestine methods that used to be exercised before the struggled pieces of legislation legalizing abortion. As usual in contemporary colonialism, the communication made around it insists on a supposed protection of what is under attack. Thus, this new law is entitled “Law on the Protection of the Conceived Life and Rights of Pregnant Woman,” as if the rights of the pregnant woman had been enhanced. Similarly the hypocrisy expressed through this law is blatant when one discovers that there is two cases of legal abortion, when endangering of the pregnant woman’s life and in the specificity of rape, that both anticipate different terms to accomplish the abortion: respectively twenty-two weeks and twelve weeks. The very existence of these two cases proves the Spanish government’s demagogy since a human life could not possibly be the object of legal calculations of this kind if the fetus was indeed recognized as a full human subject of rights.

Demography is a concern for the governments of the old Europe, who cannot accept the changes of population they experience. In their view, the white normative bodies are not reproducing fast enough to exercise the supremacy of tomorrow, hence a more or less conscious will to control the demography with legal apparatuses of this kind. The capitalist privatization of what used to be public service that many European countries currently experience is contrasted with the eminent domain claimed on the bodies in their anatomy and their biology.

LET’S DECLARE THE STRIKE OF THE UTERUS ///
by Beatriz Preciado
(my non-authorized translation):

The new law on abortion will be, along with the Irish one, the most restrictive in Europe. Let us not let a single drop of catholic national sperm penetrate into our vaginas.

Imprisoned in the individualist neoliberal fiction, we live in the naive belief that our body belongs to us, that it is our most intimate property, when the management of most of our organs is actually insured by various governmental or economic authorities. Among all the body’s organs, the uterus is likely to have been the one that has been the object of the fiercest political and economic expropriation. As a potentially gestative cavity, the uterus is not a private organ but a public space disputed between religious and political powers, as well as medical, pharmaceutical and alimentary industries. Each woman carries in herself a laboratory of the nation-state and the purity of the national ethnicity depends from the quality of its management.

For the last forty years in the Western world, feminism has undertaken a process of decolonization of the uterus. The Spanish current events show that this process is not only incomplete but still fragile and revocable. On December 20, 2013, Mariano Rajoy’s government voted the pre-project of a law about abortion that will be, along with the Irish one, the most restrictive in Europe. The law on “the Protection of the Conceived Life and Rights of Pregnant Woman” imagines only two cases of legal abortion: the risk for the physical or psychic health of the mother (until 22 weeks) or the rape (until 12 weeks). Here again, an independent doctor and a psychiatrist will have to certify that there is a risk for the mother. The text triggered the indignation of the left and feminists but also the objection of the psychiatrist collective who refuse to participate to this process of pathologization and surveillance of pregnant women that annihilate their rights to decide for themselves.

The uterus politics are, just like censorship and the restriction to the freedom of demonstration, good detectors of nationalist and totalitarian mutations. In a context of economic and political crisis of the Spanish State, confronted to the reorganization of the territory and its national “anatomy” (let us think of the secession process of Catalonia, but also of the growing disbelief of monarchy, as well as the leading class’s corruption), the government is attempting to take back the uterus as biopolitical site where it could fabricate again national sovereignty. The government imagines that through the takeover of the uterus, it will succeed in freezing the old borders of the decomposing nation-state.

This law is also a response to the legalization of homosexual wedding acquired during the previous socialist government that, despite the Popular Party’s attemps, the Constitutional Court refused to abrogate. Facing the questioning of the heterosexual family model, Rajoy’s government, close from the Catholic extremists of Opus Dei and of Cardinal Rouco Varela, wants to occupy the female body as the ultimate site from where depends, not only the national reproduction, but also the definition of the male supremacy.

If biopolitical history could be told cinematographically, we would say that the Popular Party prepares a frenetic gore porno in which Rajoy and his secretary of justice, Ruiz Gallardón, are hammering the Spanish flag in all the nation-state’s uteruses. Here is the message sent from the government to all the women of the country: your uterus is the State’s territory, it is a fertile domain for the catholic national sovereignty. You exist only as a mother. Spread your legs, become an insemination soil, reproduce Spain. If the law that the Popular Party proposes is adopted, Spanish women will wake up with the Minister Counsel and the episcopal conference inside their endometrium.

As a body born with a uterus, I close my legs in front of the national Catholicism. I tell Rajoy and Varela that they will not step foot in my uterus: I never brought child into the world, nor will ever I to serve Spanishist politics. From this humble column, I call all bodies to do the strike of the uterus. Let us empower ourselves as full citizens and no longer as reproductive uteruses. Through abstinence and homosexuality, but also through masturbation, sodomy, fetishism, coprophagy, zoophily…and abortion. Let us not let a single drop of catholic national sperm penetrate into our vaginas. Let us not bring a child into the world to serve the Popular Party nor to serve the episcopal conference’s parishes. Let us accomplish this strike like we would accomplish the most “matriotic” gesture: a way to deconstruct the nation to act for the reinvention of a post-national state life community, where the expropriation of uterus would no longer be considered.