Léopold Lambert – Paris on November 17, 2015
If you enjoy articles of the blog, have a look at The Funambulist Magazine!

The recent outcry that blamed the Western (social and press) media to bring a disproportionate attention to Friday’s deadly attacks in Paris (Nov. 13, 2015) compared to the two bombs that exploded in Beirut a few hours earlier, can only be denied through disingenuous responses. Such disproportion finds it source in what journalists call in a brutal manifestation of cynism “the amount of deads per kilometers,” i.e. as the distance grows between the deadly event, there ‘needs’ to be a bigger amount of people who die to be considered relevant by a given newspaper or TV news broadcast. This cynical affirmation is furthermore inaccurate as it forgets the Westerno-centric component to it, which makes the death of an Israeli soldier more likely to be reported than the one of a Palestinian civilian despite the same distance. However, only affirming that we should pay attention to what happened in Beirut, and doing so, only after the Paris attacks occurred, is not enough and can fall into the same perverse logic than the one it pretends to fight, since it seems that it is only in the context of the comparison than an event (in this case, the double bombing in Beirut) seems to acquire importance. It also creates a false opposition between two cities, attacked by the same armed group and by doing so also forgets the folds of complexity of the situation: for example, the fact that many people feel connected de facto to the two events (there are 36,000 Lebanese people living in France, many of which resides in the Paris region).

So, before addressing in the coming days the extremely grave and tragically predictable decisions that the French government is currently undertaking, let’s talk indeed of the way the situation in Beirut has been discursively described by the media. The double bombing conducted by Daech members and that occurred in the Burj al-Barajneh municipality (see map below), which killed 45 people and injured more than 200 others — the intervention of Adel Termos who tackled the second bomber certainly avoided that these figures would reach even more dramatic level — was described by many press organizations as occurring in a “Hezbollah stronghold,” or “Hezbollah bastion.” What follows therefore consists in examining how such a terminology is extremely problematic and heavily consequential in what it implies, as well as describing the minimum degree of complexity that any serious media should consider when describing the current situation in Lebanon in general and Beirut in particular. 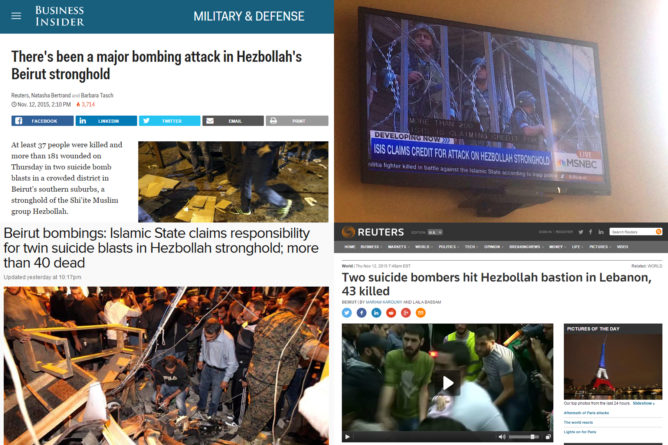 Burj al-Barajneh is a predominantly Shiite neighborhood, as is the rest of the Greater Beirut Area’s Southern districts (as well as South Lebanon), and the Hezbollah incarnates indeed the local authority in these parts of the city. It also hosts a Palestinian refugee camp and its 20,000 inhabitants since 1948. Hezbollah, engaged in the Syrian war alongside the Assad regime, and fighting Daech as West as the valley of Bekaa valley in Lebanon, was indubtly targeted by Daech in these attacks. By calling Burj al-Barajneh, a “Hezbollah stronghold” however, the Western press accomplish a double effort of minimization of the gravity of the deadly double bombing. Firstly, it discursively contributes to the drastic association that Daech does, between the neighborhood’s inhabitants to Hezbollah and its military action, and thus implicitly denies the status of civilians to the victims. Secondly, by using as directly (in the titles) the name of Hezbollah when addressing a Western audience that immediately associates it to the so-called “terrorist groups” defined by their governments, these medias contribute to an imaginary developed by both the Lebanese and Israeli governments, first during the civil war (1975-1990) and the two Israeli invasions and bombardments (1982 and 2006) in order to legitimize their destructive action against Shia neighborhoods.

As Caribbean American poet (and architect!) June Jordan poignantly writes in a 1989 poem dedicated to the Palestinian refugees in Lebanon targeted by the Israeli army and its Minister of Defense, Ariel Sharon in their war against the Palestine Liberation Organization in 1982: “They called your apartments and gardens guerrilla strongholds” (see the rest of the poem below). This transposition of a military terminology on civilian dwellings is thus a regularly used discursive device and it has drastic consequences through the legitimization that it implies regarding potential and actual attacks against these so-called “strongholds.” Such a transposition is also carefully calibrated by the Israeli army when it bombs Palestinian homes (see past article about Gaza in 2014), using pseudo-legal narratives in order to force the Palestinian population into the prejudicial status of “human shields” (see past article).

What the phrase “Hezbollah bastion” also implies is the exclusive military function of Hezbollah (a function that is actually attributed to its Jihad Council branch), voluntarily forgetting its institutional role (occupying 12 out of the 27 seats dedicated to the Shia community in the Lebanese Parliament), as well as its significant civil action, in particular in the reconstruction of hundreds of homes after the 2006 Israeli war massive destruction. As Mona Fawaz (contributor to the first issue of The Funambulist Magazine) describes in a conversation with Nasrin Himada for Scapegoat Journal, Hezbollah has been rebuilding the destroyed homes in association to local councils, refusing to wait for the slow and bureaucratic action by the Lebanese government. Of course, such an enterprise is an eminently political one, through the manifested attempt to gain/keep the support of the local population, but admitting that Hezbollah requires such a support insists on the existing separation of this population and the Shia organization.

Finally, the notion of stronghold implies the homogeneity of a neighborhood and its population, thus lacking to describe the significant difference in the reactions that are likely to follow this deadly event. Just like in the Western world, a minority of the targeted population is likely to find the perfect incarnation of the problem in the bodies of the Syrian refugee and deploy violence upon them. Let us remind that there are currently 1.9 millions Syrian refugees who sought a precarious shelter in the neighboring Lebanon, and that thus account to a quarter of the Lebanese population. In a country that experienced fifteen years of civil war, and that currently live a grave political crisis (there is no president since April 2014) that the political and inter-confessional movement “You Stink!” have revealed these last months, the discursive deployment of the situation’s complexities — something that I am barely doing here — is fundamental to avoid reproducing the past’s violence. 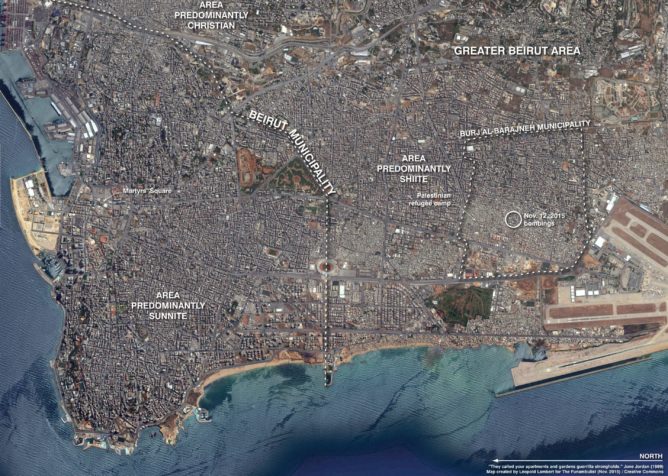 Apologies to All the People in Lebanon

I didn’t know and nobody told me and what
could I do or say, anyway?
They said you shot the London Ambassador
and when that wasn’t true
they said so
what
They said you shelled their northern villages
and when U.N. forces reported that was not true
because your side of the cease-fire was holding
since more than a year before
they said so
what
They said they wanted simply to carve
a 25 mile buffer zone and then
they ravaged your
water supplies your electricity your
hospitals your schools your highways and byways all
the way north to Beirut because they said this
was their quest for peace
They blew up your homes and demolished the grocery
stores and blocked the Red Cross and took away doctors
to jail and they cluster-bombed girls and boys
whose bodies
swelled purple and black into twice the original size
and tore the buttocks from a four month old baby
and then
they said this was brilliant
military accomplishment and this was done
they said in the name of self-defense they said
that is the noblest concept
of mankind isn’t that obvious?
They said something about never again and then
they made close to one million human beings homeless
in less than three weeks and they killed or maimed
40,000 of your men and your women and your children
But I didn’t know and nobody told me and what
could I do or say, anyway?
They said they were victims. They said you were
Arabs.
They called      your apartments and gardens      guerrilla
strongholds.
They called      the screaming devastation
that they created       the rubble.
Then they told you to leave, didn’t they?
Didn’t you read the leaflets that they dropped
from their hotshot fighter jets?
They told you to go.
One hundred and thirty-five thousand
Palestinians in Beirut and why
didn’t you take the hint?
Go!
There was the Mediterranean: You
could walk into the water and stay
there.
What was the problem?
I didn’t know and nobody told me and what
could I do or say, anyway?
Yes, I did know it was the money I earned as a poet that
paid
for the bombs and the planes and the tanks
that they used to massacre your family
But I am not an evil person
The people of my country aren’t so bad
You can expect but so much
from those of us who have to pay taxes and watch
American TV
You see my point;
I’m sorry.
I really am sorry.

June Jordan, “Apologies to all the People in Lebanon” from Directed By Desire: The Collected Poems of June Jordan (Port Townsend, WA: Copper Canyon Press, 2005).