Léopold Lambert – Paris on September 16, 2015
If you enjoy articles of the blog, have a look at The Funambulist Magazine!

Map created for the purpose of this article (see the full version below) /  Download it here in high resolution (10 MB) / (license: Creative Commons Attribution-NonCommerical-ShareAlike 4.0)

Continuing the current series about Paris and its banlieues (suburbs), here is a new map illustrating why I call the Paris municipality (only a fifth of the total Parisian population), “Fortress Paris.” The “Boulevard Périphérique” that surrounds Paris is a 35-kilometer long highway that, to a few exceptions (mainly the two forests of Boulogne and Vincennes), mark the separation between the Paris municipality and suburban municipalities. Such a wide gap built in 1954 creates a “canyon” (see a past article about urban highways as canyons) that recalls its former function of fortifications. In fact, the same route was formerly used by fortified walls supposed to defend Paris against foreign armies. Built between 1841 and 1844, following a decision of the infamous Adolphe Thiers who will order the slaughter of the Paris Commune thirty years later (see the many past articles), the walls were finally destroyed after the First World War and the liminal land of Paris remained relatively empty until the 1950s.

The map presented below is, of course, only so much illustrative, insofar that it implies a pedestrian access to Paris, something that only a little amount of bodies experience on a daily basis, most people using the subway or regional train to access Fortress Paris (see past map). Nevertheless,this map aims at illustrating the unequal logic at work in the organization of urban space in Paris, as well as the imaginary it creates for the population discriminated by it. The three symbols showing the gates to access the city center on the map represent three different gate typologies that have a significantly different impact on the bodies crossing them. Rounds show a condition where the Périphérique is underground, thus allowing easy if not unconscious crossing. Squares are bridges that cross over the highway; they are almost always wide but don’t prevent the separative gap to be fully marked and the traffic noise reinforces the uncomfortable feeling of the crossing. Triangles, finally, imply a crossing under the Périphérique, which is by far the least inviting option: often dark, noisy and smelly, the border is materialized not only by a medieval interpretation of the gate, but also by an atmospheric condition calling for all senses to experience it as such. Bodies are not equal when it comes to the feeling of insecurity and it is easy to understand that some of them (women for instance, but not exclusively) only cross these gates reluctantly and with a feeling of strong anxiety.

A quick look at the map will allow readers to understand the logic at work here: to a few exceptions, the most economically precarious municipalities in the North of Paris (Clichy, Saint Ouen, Saint Denis, Aubervilliers, Pantin, and Le Pré Saint Gervais) are linked to Fortress Paris through an under-bridge crossing, while the Western wealthiest municipalities (Boulogne Billancourt, Neuilly sur Seine, and Levallois Perret) are linked to the city center through either wide bridges or overground paths. The Southern municipalities, hosting working and low-middle classes also alternate between bridges and under bridge gates. Only the Eastern municipalities seem to indicate a breakage of this logic; this can be partially explained by a  few recent renovations that built platforms over the highway and that can be explained through the rampant (although admittedly slower than in American cities for instance) gentrification of these municipalities (Montreuil in particular) by a middle-class young population (see past map to understand the economic disparities between Parisian municipalities).

Although I would like to insist once again that this map tells us more about the logic at work than conditions that most Parisians have to experience on a daily basis, this demonstration of inequity tells us something powerful about the denial of the “right to the city.” This manifests through a double component: the denial of decentralization of a city that insists on its status intramuros (inside the walls) and the denial of access, or rather the unequal access, to this same urbanity for those who live outside of it. Once again, architecture (through its infrastructural version here) materializes the conditions of such a denial and unequal access: it either manifests its presence through its weaponized aspect to block or discourage its crossing or, on the contrary, withdraws to its minimal formation to facilitate access. Although this discriminatory tactic is particularly blatant in the case of Paris because the Périphérique surrounds the city, we can see similar denial of the right to the city in many others, in particular in the United States (see this article in the Washington Post) where the racialized and social unequal organization of the bodies in the city is often even more flagrant. 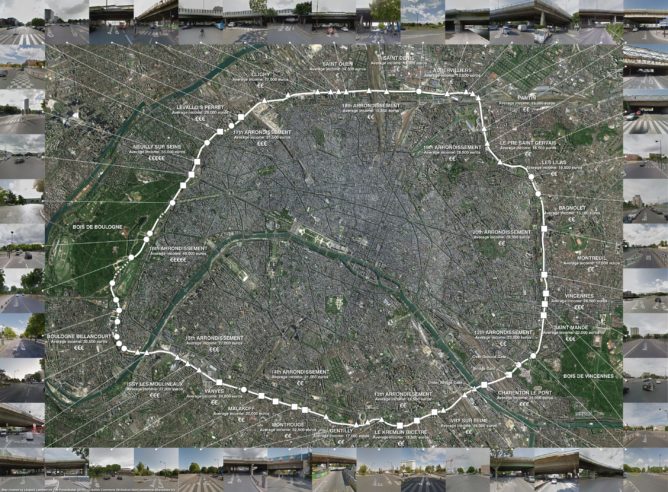