Léopold Lambert – Paris on January 10, 2018
If you enjoy articles of the blog, have a look at The Funambulist Magazine!

On January 1, 2018, Palestinian activist Ahed Tamimi was indicted by the Israeli military court of Ofer (occupied West Bank) where she has been detained since her abduction by the Israeli army on December 19. Many things have already been written about her and it did not take long before she became a symbol of Palestinian resistance. If we exclude the numerous malevolent characterization of her person, and only consider the benevolent ones, we can see how some of them are problematic in what they silently imply. The insistence on her age (16 years old), the fact that she is a woman, or much worse that she’s fair-skin and blonde can become harmful when it suggests an idea of innocence that other Palestinian political prisoners in Israeli military prisons would not share. Similarly, the narratives that insisted on the fact that Ahed Tamimi’s cousin had just been shot a rubber bullet in the head before she slapped an Israeli soldier, or that she had actually been slapped first by him are important insofar that they remind instances of the violence of the apartheid and the occupation that the Tamimi family endures (that’s what this article is about); yet, they offer a problematic plea when/if they insists on this information to suggest, here again, her innocence. Ahed Tamimi is not innocent. She is not innocent of what the Israeli court accuses her, and she is not innocent in the way we might commonly say that a child is innocent. The Israeli apartheid has striped and continues to stripe any form of innocence that one could expect a child to be entitled to as we have powerlessly witnessed in the most dreadful hours of the 2014 Israeli bombardments on Gaza and the killing of three Palestinian children on the beach (see past article).

It is therefore important to let the appropriate and legitimate voices talk about her person and we others can dedicate our efforts describing and challenging what she is fighting against. Her village, Nabi Saleh, home of over 500 Palestinian residents, is situated two dozens of kilometers North-West of Ramallah in the West Bank. After the 1995 application of the Oslo Accords (signed eight years before Ahed Tamimi was born), Nabi Saleh was placed in the intermediary zone between Area A (18% of the West Bank organized in “islands”) in which the Palestinian Authority gained a theoretical autonomy — the Second Intifada among other events proved that there was, of course, no territory beyond the Israeli army’s control — and Area C (61% of the West Bank), where the Israeli occupation army exercises a continuous sovereign power. Situated in Area B, Nabi Saleh is therefore under the Palestinian Authority sovereignty for civil matters, and under a joint Israeli army-Palestinian Authority police force sovereignty for so-called “security.” The village is thus one out of many for which the Oslo Accords changed virtually nothing for their residents who have keep seeing Israeli soldiers entering their neighborhoods or even their homes — in this regard, a photo showing Israeli soldiers inside the Tamimi’s house has circulated in that matter; because I could not track down its date and source I did not wish to include it, but you can see it here — ever since the invasion of the Jordanian-ruled West Bank in 1967 by the Israeli army (see past article).

A particularity of Nabi Saleh consists in its proximity with the Israeli settlement of Halamish, where over 1,500 settlers live, despite the violation of the Fourth Geneva Convention that the existence of such a civil infrastructure on occupied territory embodies (see the other map towards the end of the article). Between them, the Road 465 that circulates exclusively in Area C and allow the optimized circulation of Israeli vehicles from Tel Aviv, as well as the gigantic US-built Nahshonim military base situated on the immediate west part of the Green Line, to settlements situated between Ramallah and Nablus. Although the access to this road is authorized to Palestinian cars on ‘normal’ days (a small part of it links Birzeit to the new town of Rawabi), the road is regularly patrolled by Israeli army vehicles and its passage through the Apartheid Wall is sanctioned by the Rantis military checkpoint that grants access only to cars bearing a yellow plate (the Israeli license color) with all passengers presenting either an Israeli passport or a work permit, the latter being potentially denied at the discretion of the soldiers. 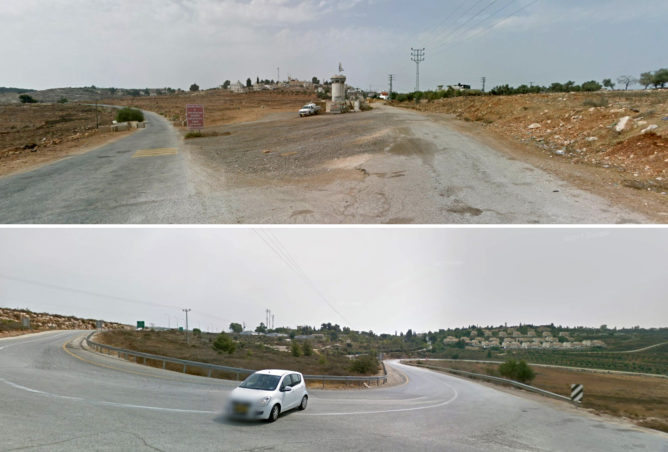 (top) the two obstructable and heavily controlled roads leading to Nabi Saleh. (bottom) Road 465 and the Israeli settlement of Halamish.

Nabi Saleh is connected to Road 465 by two 100-meter-long and 400-meter-long small roads. Their worn-out asphalt strongly contrasts with the well-maintained one used by Israeli vehicles. But, more importantly than their material state, these two short paths that used to link the villagers to Birzeit University, Ramallah, and the rest of the south West Bank are monitored by an Israeli military watchtower and blocked by concrete and stone blocks. Despite the road being accessible a couple of hundreds of meters away from its limits, Nabi Saleh, as well as other nearby villages’ residents therefore have to head North to Salfit in order to drive back “down” to go South when they want to go to other parts of the West Bank, multiplying distances and transportation time that are already important. 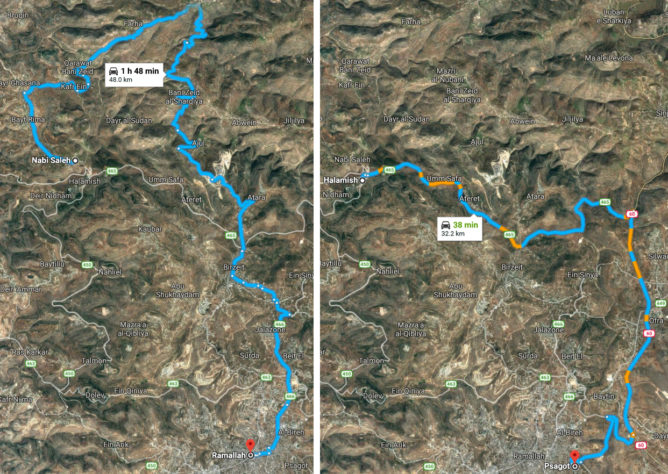 Travel comparison of a similar trip Nabi Saleh-Ramallah for a Palestinian car and the Israeli settlements of Halamish and Psagot by an Israeli car. (note that the duration for the Palestinian car assumes that checkpoints are ‘unmanned’ at the time)

Between 2010 and 2016, the Nabi Saleh villagers and people standing in solidarity with them organized weekly protests — similarly to the village of Bil’in further south-west in the West Bank — against the land expropriation that the Israeli settlement enacted and, more generally, the conditions of the occupation. On December 9, 2011, Mustafa Tamimi, Ahed’s cousin, was killed during one of these protests by an Israeli soldier who deliberately shot him a tear gas canister in the face. Several other Palestinian protesters were killed since 2011, 50 were permanently disabled and 300 other were wounded. The day before Ahed Tamimi slapped an Israeli soldier right outside her family’s house — that’s what motivated her abduction by the Israeli army — her cousin Mohammad had been shot at point blank with a so-called “rubber bullet” in the head by an Israeli soldier suppressing another protest. He spent 72 hours in a medically-inducted coma and woke up disfigured.

One can see how Ahed Tamimi, her family, and the village of Nabi Saleh are less Palestinian symbols for the exceptionalism they would embody, than for what they share with all Palestinian people, families and villages/towns whose lives are (partially) characterized by their daily experience of the Israeli apartheid and their forms of coping or resistance to it. Ironically, when the Tamimi family members and other Nabi Saleh residents drive to Ramallah, they have to pass by another symbol, albeit a very different one: the new Palestinian town of Rawabi, the paradigmatic embodiment of the Palestinian Authority’s dream of a state they can rule on, despite the exclusionary violence that their diminished and selfish vision implies against refugees, Gaza residents and, to a lesser degree, Palestinians living in Israel as well as members of the diaspora (read more in past article). Rawabi incarnates also a drastic social segregation between the Palestinian bourgeoisie that, for some of them, acquired wealth through various forms of negotiation with the apartheid — although we should be careful to insist that no negotiation of the kind could fully undo the status of colonized — while others, like the Tamimis and other residents of Nabi Saleh simply refused any sort of negotiation, regardless of how even more precarious it would make their lives. Consequently, when we say “Free Ahed Tamimi!” we do not request or negotiate her liberation based on any idea of innocence; instead, we affirm that, despite being detained in jailed, she (like all other Palestinian political prisoners) is in fact free, since her refusal to negotiate better apartheid conditions makes the entire military-judicial apparatus deployed around her null at a symbolic level. That may be part of what strikes us in the videos of her slap and of the other confrontations she had with Israeli soldiers: what we call “courage” is nothing else the full experience of this freedom that humiliates the humiliating state apparatus, that surprises the “most-prepared army,” and, eventually, that decolonizes the colonized.