Léopold Lambert – Paris on January 8, 2016
If you enjoy articles of the blog, have a look at The Funambulist Magazine!

Writing about the open wound that the history of slavery constitutes is always a painful exercise. It is also doomed to fail making us fathom the formidable sustainability of violence that the three centuries of legalized slavery implemented — but would we ever recover from such a fathoming? This article is the fifth one about the abysmal Atlantic crossing and its architectural technology, the slave ship. While two of them were comparing (without ever equating) the Atlantic abyss with the current Mediterranean one (see “The Mediterranean Abyss: South Wall of Fortress Europe and Cemetery of the Poors” and “The Politics of Overpopulated Spaces“), two others focused on the historical crossing of the slave trade, citing the three Carribean authors C.L.R. James, Édouard Glissant, and Patrick Chamoiseau (see “The Slave Ship Is Architecture” and “Abysmal Atlantic: The Slave Ships’ Genocide“).

The argument of these articles in the broader context of the research exposed on this platform is simple: although architecture and design (and through them, architects and designers) cannot be held responsible for the founding logic of the genocide that constitutes the slave trade, the latter could simply have never existed without their active contribution and, as such, architecture is fundamentally responsible for the operativity of slavery. Here, more than ever, we need to forget any dissociation between the various scales of design: the plantation cabin is architecture, of course (see Clifton Ellis and Rebecca Ginsburg (eds), Cabin, Quarter, Plantation, New Haven: Yale University Press, 2010) but more broadly, any materialized form of whatever size or nature implementing the organization of bodies in space is also architecture. This includes the slave ship and its inherent tension between the fundamental cruelty of its design and the economization of life that its function requires vis-a-vis its “human cargo.”

What the example of slave ship allows, because of the world in itself it constitutes, is a representation of the holistic dimension of the weaponization of its architecture. In other words, every component of the slave ship is designed to contribute to the organization of bodies in a spatial configuration optimizing its function, as the illustrations (above and below) of the French slave ship La Marie-Séraphine (1769-1776), show well. This includes the bodies themselves: the sailors’ bodies, in their choreographed accomplishment of navigating this “vast machine” (see Rediker, 2007), the daily ‘care’ of the hundreds of bodies living under the deck, as well as the individualized or collective deadly suppression of potential forms of revolt. In The Slave Ship: A Human History (Penguin, 2007), Marcus Rediker describes the frequent deaths of these bodies during the triangular crossings, which we can interpret through a logic that shares some similarities with slavery itself: not considering bodies individually but rather, through their muscular operativity as a whole by the ship’s captain and owners. Nevertheless, the sailors’ bodies are not the only one engaged in the holistic optimization of the slave ship through its design. The imprisoned African bodies themselves, through the deliberate overpopulation of their space (see past article), were involuntarily acting as as much walls for each other — the illustrations presented here was drawn by the ship’s officer, not an abolitionist and, as such, is very likely to have minimized the amount of bodies present — in particular when these bodies were handcuffed by two, as Rediker describes in his book. 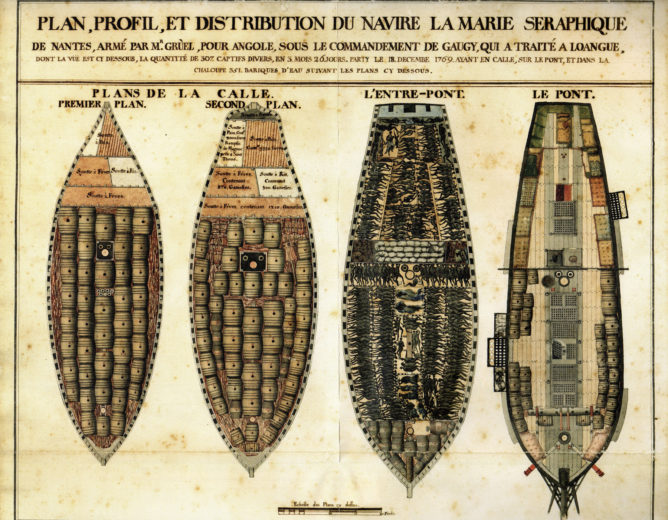 Handcuffs. Here again, we could be tempted to think of them as separate objects from the ship; however, the holistic vision we are trying to achieve here invites us to consider them as fundamentally part of the ship as an architectural machine optimizing its function in the broader scheme of slave trade — Redikers talks about ship wrecks identified as slave ships after finding an important amount of handcuffs within them. Similarly the entire set of disciplinary and torture apparatuses such as the whip or thumbscrews are fundamentally part of the ship’s deliberate design, since they were designed specifically for the function they serve, anticipating the incarcerated bodies’ revolt and, as such, legitimizing it despite fallacious anti-abolition arguments. At a larger scale, the barricado, an armed central wall separating the deck where African men were given punctual access from the rest of the ship, where sailors and their weapons could suppress a potential rebellion, should not be seen as an addition to a regular boat but, again, as a fundamental element in view of the ship’s optimal function. Suppressive means are however only one dimension of this function. Another one considers the incarcerated bodies as a valuable commodity — again, not individually but as a mass — and, as such, needs to limit its mortality (15% of the forcefully displaced bodies from Africa to the Americas died during the crossing). This is how the nets surrounding the ship prevent the exiting of the world in itself constituted by the boat by African bodies preferring to commit suicide rather than being enslaved, and how the curves of some sails were designed to constitute an air chimney ventilating (insufficiently) the space below the deck.

The problem with describing the conditions of life on the slave ship as I just did is that, although it presents the incarcerated African bodies as victims of a genocide, it also depict them within the logic of this genocide, as a biological and anatomical mass — the pairing of bodies in handcuffs illustrates that well — deprived from any agency. Admittedly, the process (including its architectural component) that stripped these bodies from their personal identity and commodifying them — the number inscribed in their very flesh accomplishes both — is what constitutes the true horror of the slave trade. Yet, describing their conditions only in these terms would imply that these bodies died as individuals the moment they forcefully stepped on the slave ship. By recognizing the forms of resistance, however small, that were lead by them during the abysmal Atlantic crossing, we are acknowledging their agency and, by doing so, we recognize the sustainability of the horror they experienced for the rest of their lives.

In conditions of optimization, any behavior or spatial configuration that would not contribute to this optimization constitutes a resistance against it — this shows us how slavery is not only built on a colonial logic, but also on a capitalist one. Revolts and suicides from the African bodies incarnate some forms of this resistance, but so did the hunger strikes (a term admittedly anachronistic), as well as the songs created by them, which would cross the barricado like no physical body would be able to, and sometimes, even allowed the disguise of messages between segregated men and women, despite the multiplicity of languages. The most radical form of resistance described by Rediker in his book is the bombing of the entire ship by revolted African bodies: in the context of the impossibility of the ship takeover or the return to the land, there has been a few occurrences of the complete disintegration of the slave architectural machine by liberated bodies who gained access to the barrels of powder.

As always when describing an extreme example of architecture’s political responsibility, it seems important to me to insist that the logic at work through this example is only different from any other architectural example in terms of intensity (however extreme) not in terms of essence. Architecture is intrinsically an instrument of organization of bodies in space, whatever the motivation for a given organizational scheme, and whether it is accomplished deliberately or not — the example examined here certainly shows the radical violence that deliberate design can facilitate. To the risk of repeating myself from many other texts, this does not mean that we should give up on architecture but, rather, that we should understand, accept, and probably embrace the responsibility for its political effects in a given society.