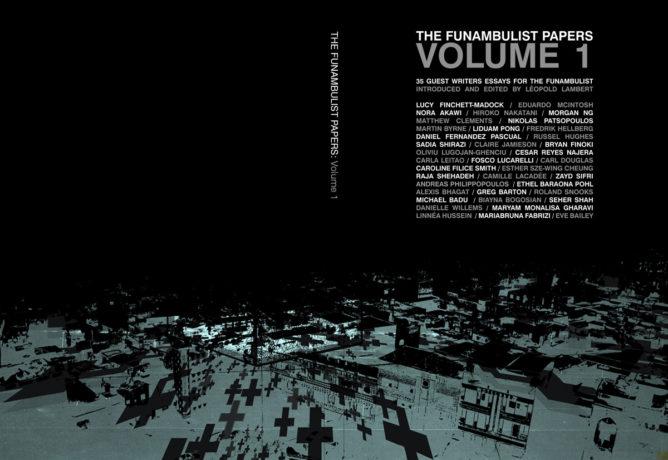 Cover of The Funambulist Papers Volume 1. (Artwork by Seher Shah)

I apologize for the sporadic frequency of my last articles, but as you will partially understand in the coming days (be ready!), there are several projects that are coming together at the same time, leaving me only little time to write on the blog.

I am happy to announce that The Funambulist Papers Volume 1, which gathers thirty four essays (+ a surprise one!) of the first series of the guest writers essays written for The Funambulist since June 2011, is about to be published by Punctum Books. In the meantime, I propose to release today the introduction that I wrote for it:

Walking on a Tightrope ///
Introduction to The Funambulist Papers Volume 1 (Punctum Books, 2013)

Since 2007, the blog The Funambulist tells stories about lines. The line is architecture’s representative medium; it creates diagrams of power that use architecture’s intrinsic violence on the bodies to organize them in space. If the white page represents a given milieu — a desert, for example — when an architect traces a line on it, (s)he virtually splits this milieu into two distinct impermeable parts, and actualizes it through the line’s embodiment, the wall. The Funambulist, also known as a tight rope walker, is the character who, somehow, subverts this power by walking on the line. She is the frail figure moving along the lines between the two towers in 1974. She is the person doing the ‘V’ with her fingers while standing on the edge of the Wall in November, 1989. And, if she happens to fall, she will find a tall Nietzschean character to say that she can die peacefully because she would die from the danger she dedicated her life to.

This book is a collection of thirty five texts from the first series of guest writers’ essays, written specifically for The Funambulist from June 2011 to November 2012. The idea of complementing my own texts by those written by others originated from the idea that having friends communicate about their work could help develop mutual interests and provide a platform to address an audience. Thirty nine authors of twenty three nationalities were given the opportunity to write essays about a part of their work that might fit with the blog’s editorial line. Overall, two ‘families’ of texts emerged, collected in two distinct parts in this volume. The first one, The Power of the Line, explores the legal, geographical and historical politics of various places of the world. The second, Architectural Narratives, approaches architecture in a mix of things that were once called philosophy, literature and art. This dichotomy represents the blog’s editorial line and can be reconciled by the obsession of approaching architecture without care for the limits of a given discipline. This method, rather than adopting the contemporary architect’s syndrome that consists in talking about everything but being an expert in nothing, attempts to consider architecture as something embedded within (geo)political, cultural, social, historical, biological, dromological mechanisms that widely exceed what is traditionally understood as the limits of its expertise.

The lines that this book addresses are also the limit between what is acceptable and what is not for an architect, or any other profession for that matter. Saying ‘no’ is as important as saying ‘yes.’ Too often, we compromise on issues that cross these lines. In order to give a more concrete approach to this problem, I propose a story:

One of this book’s guest writers, Michael Badu, recently told me about the recent situation in which he felt obliged to quite literally say “no.” As he was designing the new mosque of Malmö in Sweden, he was attempting to combine the rules of the program with his own ethics. Traditionally, a mosque separates men and women into two sections. For Michael, this distinction between genders should in no way imply that one of them should be better served than the other one. He therefore designed a mezzanine within the main prayer room where women would feel just as much part of the office than the men. Unfortunately, the commission board insisted on the strict spatial separation of genders, and requested that Michael revise his design to integrate an additional room where women would pray on their own. Michael categorically refused and was then laid off from the project.

It probably would have been easy for him to concede a bit of ‘ground,’ find a compromise and tell himself that his ethics were not affected by this deal. On the contrary, he realized that he found himself at a point where any concession from him would have indubitably implied crossing the line. The line is different for each of us, depending on how we construct a consistent ethical system. Often, our line crosses others’ or overlaps with them in a collective sharing of values and principles.

If one question motivates the articulations of thoughts and problems on The Funambulist, it surely consists in wondering whether we, as architects, can accept the commission for a prison, thinking that we might be able to improve the conditions of the people who will be subjected to this architecture, or rather simply refuse it. Reform or revolution? In that case, more questions arise. If we categorically reject the idea of designing a prison, what about a bank, a corporate office building, a retail store, a factory, an (anti-homeless) bench, etc.? This question, seen here through an architect’s eyes, is the same for any profession that fundamentally affects the lives and bodies of a given society. None of these projects can be politically innocent and intervening on them in one way or another requires a deep understanding of the way they operate. My hope for this book is to contribute to that field of knowledge through the texts of my guests. I would like to thank each of them for having accepted to participate to this first series, and look forward to the next one.