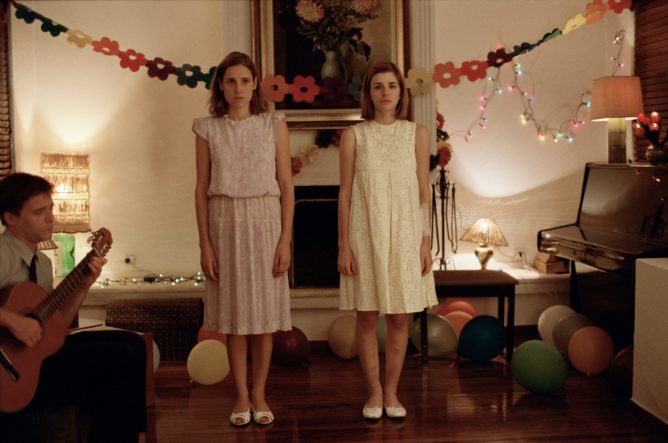 Still from Dogtooth (2009) by Yorgos Lanthimos

The Funambulist Papers series — the second volume will be published in the first part of 2015 — continues today. I am happy to supply some ‘fresh air’ in the middle of my obsessive writing! This fresh air is brought to us by Ina Karkani who is a film and literature scholar at Stockholm University. Her text,  “Framing the Weird Body in Contemporary European Cinema,” brings a cinematographic approach to this series dedicated to the question of the body. Through the three recent Greek films, Dogtooth (see past article), Alps by Yorgos Lanthimos and Attenberg by Athina Rachel Tsangaris, she attempts to examine the notion of “weird body” as a new form of cinematographic corporeal representation. The very notion of weirdness when it comes to the body is, of course, a jest insofar that no body could possibly be anything else than weird, i.e. in more or less strong discrepancy with the norm.

New filmmaking practices within contemporary arthouse cinema are responding to current socio-political realities with new cinematic images of the human body. They center around grotesque characters embedded within plots of comic absurdity. Particularly, since 2009, a Greek film trend has attracted international attention with the film festival premiere of Giorgos Lanthimos’s social thriller Dogtooth (2009) and its follow up Alps (2011) and Attenberg (2010) by Athina Rachel Tsangaris. The films have been produced in the midst of, and, as a response to the current Greek social crisis, economic turmoil of rapid transformation, neo-liberalization in time of ongoing bankruptcy.

Gilles Deleuze acknowledges cinema’s genetic value in its  “constituting bodies and in this way restoring our belief in the world, restoring our reason”.[1] Moreover, it is through the human body that cinema deserves its philosophical merit and forms its  “alliance with the spirit and with thought”.[2] The implication of these arguments carries the assumption that the material human body is essentially political and, according to Deleuze, it is so through its ability to move and to “move us into thinking.”[3] As such, Dogtooth, Alps and Attenberg prove anew that the human body is a dynamic political and affective force with a high efficiency to negotiate social politics.

Reverberating Deleuze’s formulation of artistic exploration of the human body, the films deal frankly with social traumas through their on-screen interrogation of physicality. Dogtooth, Alps and Attenberg belong to a young generation of contemporary European arthouse cinema that operates through a strong demand to shoot more acute issues through their formal and thematic experimentations. Their interest in the construction of uncanny images of the performing body that create an aesthetically “weird” physicality, a weird body, aims at moving the viewer to spaces and situations which lie beyond familiar film experience.

Thematically, Dogtooth, Attenberg and Alps portray the lived experience of everyday characters in absurd situations. They are traumatically affected by the insularity of post-capitalism and the effects of  paternalism in households. In Dogtooth, the narrative of the family is used as a metaphor for capitalist violence wherein the oppressive regime of patriarchal power and its mechanisms of manipulation is keeping the characters’ obedience at bay; Attenberg articulates the betrayal of an industrial promise on the example of a deserted industrial coast town and its effects upon the physicality of the protagonist; Alps negotiates its resulting postmodern symptoms, that is, the physical manifestation of  the character’s identity loss and dispersion.

However, it is within the aesthetics where the implied critique is more genuinely evocative. The films show an interest in portraying the emotional status of the characters through a mise-en-scene that has a preference for disorder. Acoustically hyper-stimulated images that picture the characters’ body in uncanny clarity, a fragmented cinematography that captures limbs, decapitated bodies and off-screen voices make conspicuous the characters’ physical and psychological framing – an overall fragmented image of the body that not only frames weirdness, but, leads to exhausting  viewing conditions.

In Dogtooth, for example, captured by an unstable long-shot frame, the older daughter of a family builds herself at the wedding anniversary of her parents, in a moment of “performative excess,” into crescendos of hysteric dance performances until exhaustion and then devours her dessert. Her madness culminates in a subsequent bathroom scene, where in a diagonal line to the camera, she smashes her face with a dumbbell to knock out a dogtooth and then escapes from her family prison. Earlier, a similar unstable psychological condition is established through the camera focusing on the lower body parts of the two sisters that anaesthetize each other while their voices speak off-screen, slash each other to retaliate and, soon after that, commit incest. In yet another moment, the older daughter enacts a scene from the movie Rocky 4 and, in a close-up, jerks violently toward and away from the camera, bearing out the strikes of an invisible opponent and loses herself in performative, citational grunts.  Almost identical moments of viewing experience create unease and spatial uncertainty in Attenberg (2010) when the frame focuses on the characters’ partial bodies that drop on all fours, hiss at each other like cats in the heat, or, scratch themselves like monkeys. At other times, a handy-cam follows them as they break into uncontrollable weird dances of their own invention, or, engage in sex scenes that are unnatural and painfully awkward to watch. In Alps (2011), the unstable camera close-ups reveal a linguistically anorexic young nurse with eyes that seldom blink and a face that scarcely changes expression. In yet another moment, we can see her play-acting a dead girl, citing half-remembered script lines to provide comfort for the grieving family. In case of failure though, or complaint, she endures violent strokes with acquiescence and loses her mission.

The films have been commonly referenced for this weird premise, eerie atmosphere, absurdist dialogue, grotesque humor and illogicality.[4]  The terms weird, eerie, absurd, grotesque in this context, bear a conceptual synonymity as they find a common degree of aesthetic expression within the films and are therefore subsumed under the blanket term “weird”.  Usually, the epithet weird refers to films of  the horror-genre characterizing what lies beyond the ordinary or normal and, therefore, evokes in the Freudian sense uncanniness, or “unfamiliarity” (das Unheimliche).[5] It is within the same conceptual context that many theorists as Heidegger, Camus and Piaget locate absurdity, namely as something unfamiliar,  “either identical or intimately related to the uncanny feeling”. [6]

Furthering this premise, absurdity in Dogtooth, Attenberg and Alps, as portrayed in the characters’ absurd performances and situations of humor, is magnified through a formal interest in images that generate feelings of disorientation. These aesthetic strategies that bear elements of Deleuze’s “aesthetics of the false,”[7] namely, a cinema that embraces aesthetic diversity by opting for alternative means of representation, serve in Dogtooth, Attenberg and Alps  as political ploy to address the viewer’s agency: it calls for a sophisticated viewer response in discerning meaning and value with regards to the film’s critical philosophical agenda in portraying characters and situations of uncertainty, ambiguity and ephemerality.

It is within this absurdist context  that Marina’s exaggerated physical choreography in Attenberg is to be understood. In matching dresses, she and her best friend Bella work hard to perfect silly walk variations in the streets of her bleak industrial town. Each movement is performed in slow motion, broken down to smaller kinetic close-ups and camera angles, as if pointing to what the naked senses cannot distinguish as separate movements.  With a  mathematically calibrated camera sound and an overtly saturated color palette, these repetitive studies of the body remind of a post-millennium version of Eadweard Muybridge’s studies of stop-motion photographs that unconventionally disrupt with the film’s formal as well as thematic  flow.

Physical absurdity in Attenberg is furthermore reenhanced through camera strategies: when Marina invents elaborate ways of waggling her shoulder blades, the extreme close-up of the moving bones disconnect the shoulder from the body. This invokes a feeling of absurd uncanny at work, a deviant appearance of physical activity. Such effects of absurdity and uncanny are generated in Deleuze’s concept of the affection-image : For Deleuze, the close-up is not a partial object but abstracts it from all spatio-temporal coordinates. It is not an enlargement that requires a translation of dimension, it is an expression which is to be understood by itself – it staves the image off its conventional spatio-temporal coordinates wherein even the background loses its coordinates and

becomes “unheimlich”.[8] The image becomes an uncanny any-space-whatever, a place that has lost its homogeneity, a space of virtual conjunction.[9]

Steven Shaviro formulates contemporary media-art as “digital technologies, together with neo-liberal economic relations that have given birth to radically new ways of manufacturing and articulating lived experience.” His socio-technological statement finds further voice in Laura U. Marks’ haptic visuality[10] as well as haptic aurality as suggested by Jean-Luc Nancy.[11]  Both notions describe a form of sensory experience, a haptic perception that renders vision as embodied and material.

Alps, for example, portrays the nurse “Monte Rosa” through varied aesthetic components such as color, light, sound and framing to generate instability, fluctuation and ephemerality. The nurse’s emotional fragility is perpetrated through tonal alternation – often her pale contour dissolves into the bright pastel tones of delicate blues that aim at de-saturating her, as if denying her solid presence. The film depicts this overt instability of the performing body as its centre of meaningful action. Screening time is devoted to the staging of her different roles in a plethora of indeterminate settings with various groups of people, of her oscillating, floating between moods and modes of life.

The sound follows this thematic through a digital monotonicity, a haunting ‘leitmotif’ that hints at her entrapment between these various modes of existence, the betwixt loop of being from which she yearns to escape. As if pending between the Deleuzian movement,- and time image regimes, her unrequited becoming other is furthermore mirrored through a fragmented and grainy image that liquefies her silhouette and creates often unrecognizable images evoking through their haptic and aural quality a disquieting and ominous effect on the viewer.

Figure 3.  Alps, in the betwixt loop of being

Similar images are articulated in Dogtooth where an eerie sound design frames the characters’ physicality emotionally as well as formally: often it seems as if microphone particles replace the very pore of the characters’ body to capture every swallow and scratch in uncanny clarity, to create distance between the body and its environment.

Such phenomenological Deleuzian understanding opens the films up to an affective, hence sensory reading that evokes sensorially confusing abstractions of the body. Dogtooth, Attenberg and Alps, in this respect, exemplify how film can experiment with given fictional conventions to open up ever new definitions of the human body as the weird body that, in turn, reconfigure the sensory apparatus, film making practices, performance strategies and not least, definitions of the cinematic medium itself.

8. According to Freud, the “Unheimliche” or “uncanny” belongs to his theory of aesthetics as a quality of feeling. It is  related to something that is frightening because  it is not known and familiar, something novel that causes “intellectual uncertainty” doubt, ambivalence. Situations that according to Freud might arouse such feelings are doubts whether an apparently animate being is really alive, as for example automata or the impression of automatic, mechanical process at work behind the ordinary appearance of mental activity. Other situations are fear of castration, repetition of coincidences, the phenomenon of the double. see: Sigmund Freud, “The Uncanny”, in: Sigmund Freud, Art and Literature, The Penguin Freud Library, Vol. 14, London: Penguin, 1985, p. 339-376.

10. Marks, Laura U. The Skin of The Film: Intercultural Cinema, Embodiment, and The Senses, Durham and London: Duke University Press, 2000. p.2.