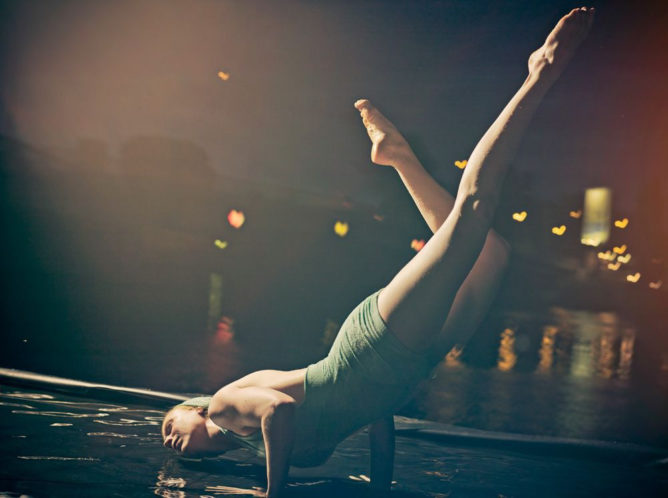 The second volume of The Funambulist Papers (see here for the first one) will be dedicated to questions surrounding the body. As regular readers might have already noticed, there have been already a few approaches to these questions in the past essays of this series, and there will continue to be more. Today’s guest, Adrienne Hart, is particularly competent to talk about bodies as she uses them as primary matter of her art: choreography. In 2003, she founded the Neon Dance company and created several shows since then. In her text “A Sensing Body | A Networked Mind,” she approach the body through a rather unusual take on this platform, the “cartesian dualism” between body and mind, although this is only to reassemble them in the production of dance.

A Sensing Body | A Networked Mind

An inbuilt desire to stray from the path, across the grass in a city park is one example of how the learned or ‘schooled’ body misbehaves. I’m interested in the tension between our body’s social contract and hard-wired collective behaviour. I’m also interested in what happens when the mind no longer requires a body to communicate. When we sit at a desk computer or peer into a smartphone our minds log in and our sense of embodied self rapidly decreases. The networked mind locks into a network stream and sends itself to locations far from the host body’s reach. How relevant is the body in an age that allows minds to roam free? Should we fight for the notion of body or are we already floating around in corpses, our vessels proving only to serve some kind of nod or nostalgic reflection to the past.

The influence of embodiment on mind-perception

Psychologist Kurt Gray among others has recently developed the idea that we’re all ‘Cartesian dualists’ – our minds able to work independently of the body. Writer Matthew Hutson describes a more complex picture drawing from Gray’s 2011 paper on the subject, ‘their results suggest that we see the body together with some of the mind – the part that feels things – as one type of stuff, and the remainder of the mind — abstract cognition — as another. A sensitive body versus a competent mind. They say we’re Platonic dualists, as Plato believed our eternal minds knew the universe’s ideal forms before we became implanted in and corrupted by the body, which came with sensation and desire.’

So what we plant online might only be part of what makes us who we are. The sensing body left to consume, digest and react to our growing and increasingly singularitarian abstract cognitive self.

As a choreographer I spend vast amounts of my time in the studio challenging and questioning how we move. A dancer trains his/her body for years with daily technique classes only to spend a professional career battling with this codified technique. Now imprinted on the body, they risk becoming products of an institution. We challenge the body to consider in a split second the many possible pathways available. But to ‘embrace every possibility’ (Borges) mental discipline is required along with strategies to avoid deception.

My thinking is technology has networked the mind, placing a new system with a new type of architecture for us to flow through, which in turn shapes how we think. So, where does that leave the sensing body?

My old route from Shoreditch to Liverpool street station in London comes to mind. On hitting the main street flooded with suits, free paper handouts and generic coffee shops I sink into the groove, ‘I’ become ‘we’ and collectively ‘we’ march; the sound of progress reaches a deafening pace; the rules I follow are simple and mimic that of a flocking bird or a bug in a swarm. I’m not even that aware of the noise around me anymore, instead my brain disconnects from its immediate environment as I reach for my phone to go online. There my mind expands out to form a small part of many other networked minds. I feed it, feed off it, rely on it, get too consumed and bump out of synchronicity with my fellow pace makers. Up until that point I have existing in some kind of dualist ‘lock-in’.

“At a certain density, the bugs would shift to cohesive, aligned clusters. And at a second critical point, the clusters would become a single marching army. Haphazard milling became rank-and-file—a prelude to their transformation into black-and-yellow adults.
It’s a phase transition, like water turning to ice. The individuals have no plan. They obey no instructions. But with the right if-then rules, order emerges..”  (Ed Yong, Wired, 2013)

I see the body as this moving form in constant transformative flow. In a way the body becomes a form escapism, where ideas can geminate and rattle around for a while without the interference of an external force. We have the ability to do that, internalise and process an idea before projecting a slightly altered self, back into world. Vernon Lee best known for her work on aesthetics at the turn of the 20th century described how ‘the subjective inside us can turn into the objective outside’. Lee’s ‘Beauty and Ugliness’, which was first published in the Contemporary Review in 1897 noted physical changes in the body when looking upon art and architecture. She hinted at our entangled nature with things. Ian Hodder in ‘Entangled: An Archaeology of the Relationships between Humans and Things (2012) suggests ‘the lack of inertness is linked to the lack of isolation’. He speculates in a thought experiment that only a child born suspended in darkness deprived of all external stimuli unable to even touch and therefore learn from its own body might escape such a fate ‘The thing ties people together, and into relations of dominance and subordination’. But what if we could train our mind to enter that dark suspended space and free our bodies momentarily from all the connections, cutting all the strings…

Shri-Chitipati, Unknown artist (Tibet), hand-painted wood, 18th century, Wellcome, courtesy The Richard Harris Collection – A pair of dancing skeletons called the Chitipati, believed to be gods of the underworld. Thought to have sprung from the vengeful corpses of two yogis who were so absorbed in their meditation inside a Himalayan cave that they did not notice when a murderous thief cut off their heads.

While you were sleeping…

‘Our need for belonging comes right after physical safety’ and yet if we are to assume Maslow has our needs all worked out, why do we put our ‘physical safety’ on the line in order to stay connected?

When you are a passenger in a car you hand over responsibility to another. Perhaps the cars motion sends you off into a deep thought, bumping over cat lights triggers you awake. A sideways glance over to the driver whose eyes are at half mask affirms the fact that you’ve both been sleeping. Where are the bumps in the road now that online has spilled out and mapped itself on top of the physical world; two realities operating at the same time. Duality exists today at the expense of our bodies.

I like the body when it misbehaves because in that moment it overrides a system. Singularity shattered into infinite possibilities. When I am in a state of data or information flow I feel disembodied. The mind expands beyond the confines of the body and connects / locks into a stream where it is subject to a flurry of influences as I bounce from link to link. The flow is unyielding and constant. Can I hover momentarily above the stream and forge pathways that are not simply reactionary but self-aware? The sense of an embodied mind might return and there creativity can serve the purpose of offering both the individual and the collective an alternative.