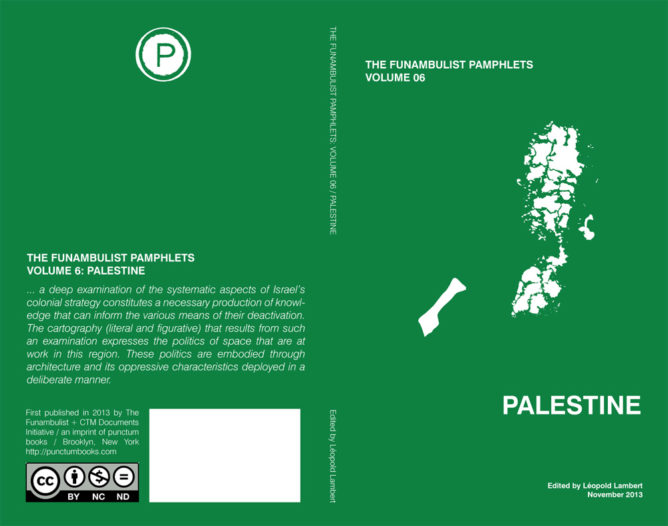 The sixth volume of The Funambulist Pamphlets that gathers and edits past articles (as well as additional photographs) of the blog about Palestine, is now officially published by Punctum Books in collaboration with the Center for Transformative Media at Parsons The New School. You can either download the book as a PDF for free or order it online for the price of $7.00 or €6.00. Next volume to be published will be dedicated to Cruel Designs. Click here to see the other volumes of The Funambulist Pamphlets.

Index of the Book

Introduction: Cartography of a Colonial Politics of Space
01/ The Palestinian Archipelago: A Metaphorical Cartography of the Occupied Territories
02/ For a More Embodied Vision of the Occupation: The Israeli Settlements in the West Bank Through Palestinian eyes
03/ Architectural Stockholm Syndrome
04/ The Route 443, a Symptomatic Example of the Apartheid Apparatus in the West Bank
05/ Road Link between Gaza and the West Bank: A Sovereignty Contained in a Line
06/ The Ordinary Violence of the Colonial Apparatuses in the West Bank
07/ The Right to the Ruin: Civilization Absence in the Post-Nakba Landscapes
08/ Sympathy with the Obstacle in the Gaza Strip
09/ War in the Manhattan Strip
10/ Political Geography of the Gaza Strip: A Territory of Experiments for the State of Israel
11/ Representation of Otherness for a Gaza Kid
12/ The Policies of the “Lesser Evil”
13/ Palestine: What the International Legislation Says
14/ Law as a Colonial Weapon
15/ The Reasons for Disobeying a Law
16/ The Palestinian Legal Right of Return
17/ Manual of Return
18/ 2037 by Raja Shehadeh
19/ Running as Political Resistance
20/ Idealism & Imagination
21/ Are we Questioning the Essence of Problems?
22/ An Epistolary Conversation with R. Debatty
23/ An Epistolary Conversation with A. Barclay and D. Qaddumi