After the first year of existence of The Funambulist Magazine that examined the politics of militarized cities, the suburbs, clothing, prisons, structurally racist designs, and objects, I am delighted to begin this second year with an issue dedicated to health-related political struggles. This 7th issue opens with a new recurrent section entitled “Political Walks” that asks a contributor to introduce us to a meaningful pathway in a given city — in this case, Alex Shams about Tehran. The three guest column of the general sections are dedicated to the denial of citizenry that Japan attribute to the Korean (and Taiwanese) members of its society (Christina Yi), a report on the situation of women’s rights in post-invasion Iraq (Zahra Ali), as well as a personal account on the recent night that saw a coup failing in Turkey, as well as the following days (Merve Bedir). The main dossier, “Health Struggles,” does not approach the concept of health merely as that which prevents a body from dying but, rather, as the most incarnate level of politics since it tend to mobilize the very biologies of the bodies it takes for object. For this same reason, it is also a domain where the norm shows the highest degrees of crystalization in its stigmatization of some bodies over others.

The dossier begins with six significant vignettes approaching various aspects of this topic: the 2014 Ebola Quarantine in the neighborhood of West Point in Monrovia, Liberia, the work of Alondra Nelson about the alternative healthcare program of the Black Panther Party in the 1970s, the hospital as an architecture of control, the former French-Muslim hospital of Bobigny, the use of medical expertise in the asylum process in France, as well as the work of Paul B. Preciado around the gradual use of testosterone. The main articles involve the designation of abject bodies in the way the city is thought and designed (Blanca Pujals), he Texan regulations on abortion clinics that poorly disguise their antagonism against them (Lori Brown), the hunger strikes undertaken in political prisons from Guantanamo to Turkey (Banu Bargu), the criminalization of HIV positive Black and/or Queer bodies in the United States (Che Gossett), as well as the ‘pathologization’ of Disabled and/or Female bodies enabled by medical discourses (Noémie Aulombard). Exceptionally, the podcast transcript and the photographic section have merged to serve a long interview of Momoyo Homma about the work of artists/poets/architects Shusaku Arakawa and Madeline Gins. The issue ends with two student projects related to the topic, a look at clinical characteristics in architecture (Piergianna Mazzocca) and a bacterial kit for DIY gynecology (Giulia Tomasello).

A new commercial aspect of this second year is a simplification: the printed version of the magazine (including the monthly and annual subscriptions) will always be complemented with the digital version. With this in mind, here are the different ways to acquire this new issue:

Talking about partner bookstores, it is also my pleasure to announce that the various partnerships with bookstores of Southern/Eastern Europe and the Global South proposing the magazine for a more accessible price (indexed on the cost of life of the concerned country) have started in Mexico, Colombia, Nigeria, Morocco, Portugal, Croatia, Pakistan, Singapore, and Hong Kong (and soon in Lebanon). If you are aware of bookstores that would be interested to be part of this specific program, you can send an email at info@thefunambulist.dev. Thank you! 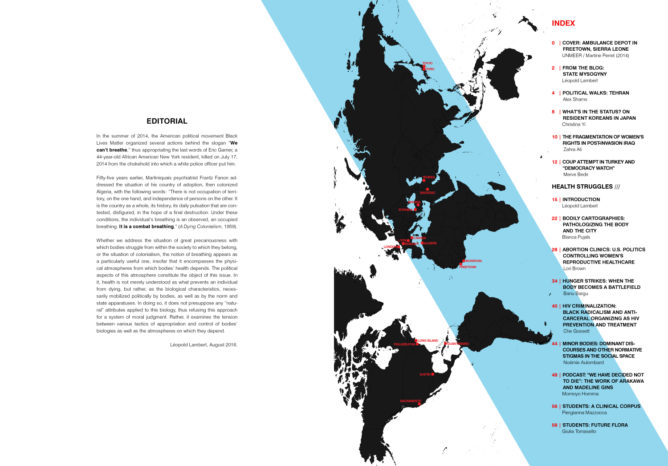