Happy New Year everyone! In the first days of 2016, I am very happy to announce the launch of the third issue (Jan-Feb 2016) of The Funambulist Magazine dedicated to Clothing Politics. This issue examines a scale of design closer to bodies than the ones previously studied in the two past issues. The layers of fabric we incorporate (i.e. form into a body) are all charged both legally and normatively, and this charge combines with those related to a body’s race, gender, behavior, and spatial-temporal context. This issue thus proposes to examine this combination of normative charges — sometimes turned into law — through various wearable objects we call clothes: shoes (Minh-Ha T. Pham), pants (Eric Darnell Pritchard, Mimi Thi Nguyen), shirts (Lucy Jones), accessories (Murktarat Yussuff), and different head garments (Reina Lewis, Hana Tajima, Emma Tarlo). I would like to particularly thank Hana Tajima for having accepted to be featured on the issue’s cover, as well as Mimi Thi Nguyen and Minh-Ha T. Pham for the great direct and indirect influence they brought to the very existence of this issue, mostly through the work they have assembled on their blog Threadbared. For more about the issue, see the index at the end of this text.

Because of the way the status of press is allocated in France (at least 10% of the issue should not address the main theme), two new exciting sections are now occupying the first pages of the issue:

— FROM THE BLOG proposes one or two re-edition of the blog’s recent articles. In the specific case of this issue, “The Weaponized Architecture of Paris’ Banlieue Police Stations,” and “Beirut’s November Bombing and the Notion of ‘Hezbollah Bastion‘.”
— GUEST COLUMNISTS offers informed opinions about recent events or projects around the world. In this issue, Merve Bedir analyses the New World Summit’s parliament project in Rojava (Kurdistan), and Françoise Vergès describes the feminists of color’s struggle in France through the organization of the recent March for Dignity and Against Racism, which was held in Paris on October 31.

HOW, AND WHERE TO GET THE FUNAMBULIST?

The Funambulist Magazine only exists through its sales, i.e. through you. Here is a list of the many ways to get it and, by doing so, to help the project:

The main ambition for The Funambulist is and fundamentally remains an editorial one: proposing through its various platforms (magazine, blog, podcast, books, and external articles) an examination of the politics of the designed/built environment in relation to bodies through a variety of disciplines. Nevertheless, since the magazine venture started (i.e. since I am dedicating my entire time to this project), there also needs to be an ambition regarding its financial sustainability. To be fully transparent with you its readers, the current amount of subscribers and purchasers, although satisfying for such a young publication, is not yet enough to keep me working full-time on it in a few months. You can help by taking a subscription and spreading the word about the project, but also by other means introduced here. A new way to help consists in finding potential advertisers for the magazine, which would significantly contribute to its economic sustainability. You can download the presentation file to advertisers by following this link.

OTHER NEWS IN THE BEGINNING OF THE YEAR

— THE MAGAZINE: The next two issues (March-April & May-June) will be respectively dedicated to Carceral Environments and Design & Racism. I am still looking for student projects to be featured in the student section of the magazine. Do not hesitate to send me an email (info.funambulist@gmail.com) if you would like to propose for consideration one or several.
— ARCHIPELAGO: A few days ago, I published the 100th conversation on The Funambulist’s podcast. This project started on January 1, 2014 and it allowed me to record fascinating interviews of 113 thinkers and creators in the Americas, the Middle East, Europe and Japan. The back cover of the third issue of the magazine features the 100 photographs of these conversations.
— BOOKS: Two books that I wrote will soon be published: The long-due French-English version of Topie Impitoyable: The Corporeal Politics of the Cloth, the Wall, and the Street (punctum books)  illustrated by Loredana Micu, while its Italian version (Deleyva Editore) just hit the shelves, and La politique du bulldozer: La ruine palestinienne comme projet israélien (Bulldozer Politics: The Palestinian Ruin as an Israeli Project, B2 Editions).
— LECTURES: The first part of the year will bring exciting opportunities to present various aspects of my work in Zagreb (February), Bard (April), NYU (May), Warwick (May), ETH Zurich (May), and Athens (July). I look forward to meeting some of you in these locations.

COVER & INDEX OF THE THIRD ISSUE 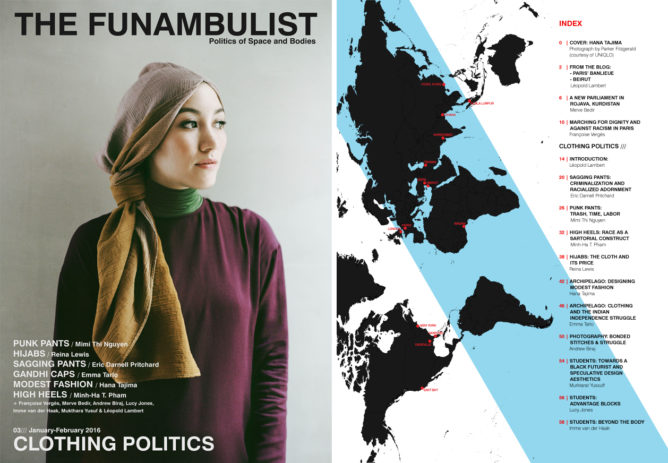