Today is October 27, 2015. Exactly ten years ago, ten teenagers from Clichy-sous-Bois (North-Eastern Paris banlieue) who were coming back from a football game were illegitimately chased by the police. They did not have their ID cards with them (who has it to play football?) and, for some of them, did not want to be late for the break of the Ramadan fast, so they ran. Three of them, Muhittin Altun, Zyed Benna, and Bouna Traoré, found shelter in an electric transformer, but were electrocuted and burnt to death; only Muhittin survived. This tragic event, illustrative of the police’s discriminate controls in the banlieues — the banlieue youth, in particular the Black and Arab one, is sometimes controlled by the police more than once a day — as well as of the politicians’ absolute disconnection (if not, clear antagonism) from these neighborhoods. A few days earlier, Nicolas Sarkozy, back then Minister of Interior, had promised to wash-out the banlieues “with a Karsher.” Following the outrage and anger of Zyed and Bouna’s death, the French Banlieue revolted for three weeks against police violence and the deep social segregation their living space embodies. The most spectacular forms of this revolt, characterized by numerous cars, and a few buildings burnt (more about this in a forthcoming article) were relayed by the press of the world, and the journalists went back to the banlieues “like they were visiting a zoo” as the character of Hubert Kounde points out in Mathieu Kassovitz’s canonical film La Haine, which depicts all-too-similar events ten years before 2005. Ten years after the great revolt, and twenty after La Haine, nothing has changed for the French banlieues and the antagonism developed by the police is still very much operative as architecture itself illustrates (see yesterday’s article about Paris Northern banlieue police stations). The struggle for social, legal, racial and territorial equality requires efforts on all fields, including the one of critical intellectual research. It was thus important for me to publish the second issue of The Funambulist Magazine dedicated to Suburban Geographies on this symbolical date, as the following editorial note, accompanied by the evocative images of La Haine asserts: 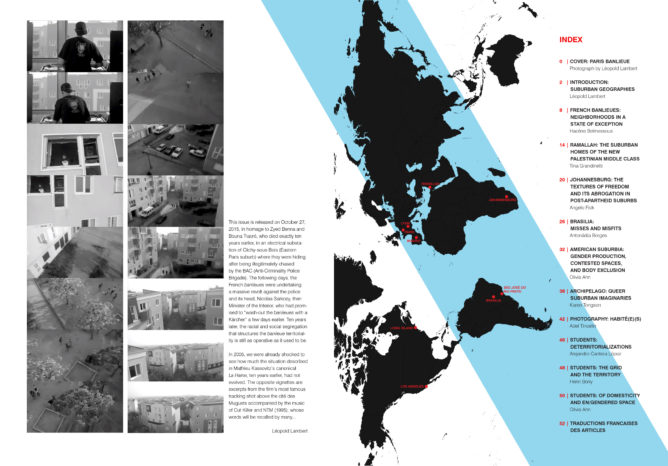 Although this second issue has a significant part of its content dedicated to the French banlieues (photographs by Adel Tincelin and article by Hacène Belmessous about police urban planning in particular), it examines many more peripheral forms of urbanity that are all characterized by voluntary or forced segregated territoriality. In the case of Brasilia, anthropologist Antonádia Borges uses the two opposite figures of the miss and the misfit to describe how the canonical architectural city only hosts the highest social class of the city, while the working class live in poorly connected satellite cities. On the contrary, Tina Grandinetti gives us a critical reading of the voluntary withdrawal of the city center of Ramallah by the Palestinian middle class to favor newly built neighborhoods/towns, like Rawabi to live apart from the rest of society, in a normalization process of the Israeli occupation. In Johannesburg, Angelo Fick uses the example of the suburban neighborhood of Killarney to describe the urban reminiscences of the South African apartheid that still operate as a segregative device. The American suburbia is also a predominant paradigm throughout this issue, in particular through Olivia Ahn‘s article about the suburban house as a  post-war gender productive apparatus, and the Archipelago interview with Karen Tongson about Los Angeles’ queer suburban imaginaries. As usual, student works are also put forward in relation to the topic with projects in Madrid (Alejandro Cantera López), Paris (Henri Bony) and Long Island (Olivia Ahn). I hope that this issue will contribute to a productive debate in the severe role played by urbanism, architecture, design in the segregative organization of territory, as well as the potentiality to subvert — Olivia Ahn would say “to queer” — these mechanisms in order to dissolve the gender, racial and social violence this segregation produces.

In addition to the contributors cited above, I would like to thank the photographs (Cyrus Cornut, Andrea & Magda, Gabo Morales, and Deanna Erdmann) who agreed to see their work reinforcing the arguments made in the texts, Amrit Trewn for transcribing and editing the Archipelago interviews, Liduam Pong, Fanny Léglise, Joanne Pouzenc for their translations, as well as Hiroko Nakatani, Philippe Theophanidis, Maxwell Donnewald, Felicia Yong, and Zulaikha Ayub for their much appreciated support.

You can purchase the issue in its printed version and in its digital one. A combo printed + digital also exists, as well as a November offer to purchase both the first and second issues together for a discounted price. The Funambulist (to the exception of its podcast) is only founded by these sales that thus represent a significant form of support of the project as a whole (magazine, blog, and podcast), and you can subscribe to it on a monthly basis to show such a support. If you are in London on November 2, feel free to join us at the Westminster Law & Theory Lab for a formal presentation of the magazine in general, and this issue in particular. Thank you very much for your attention and interest for this work.