Léopold Lambert – Paris on October 8, 2015
If you enjoy articles of the blog, have a look at The Funambulist Magazine!

Once again, I feel the absolute urge to write in order to join the voices gathered against the Apartheid imposed on Palestinian bodies by the Israeli government, and its recent tightening, in particular in Jerusalem itself (see recent article).

The Western mainstream Press, as usual, is preparing the appropriate conditions for the Israeli army to deploy its violence without a strong reaction from their respective governments. It does so through a verbal and pictorial narrative that depicts violent, masked and uncontrollable Palestinian youth throwing stones at Israeli soldiers and vehicles. A few other media have been providing the violence of the conditions in which these scenes have occurred, but this is not what I would like to do here. Instead, I would like to reflect on this very act of throwing stones: what does this act reveal about the state of Apartheid, and the role of Palestinians within it?

A series of new measures executed by the Netanyahu administration recently significantly increased punishment (up to four years in prisons and substantial fines) towards Palestinian that throw stones against its army. But it also constructs the legal conditions in which the Israeli army could use live fire (0.22 caliber live rounds) on stone throwers — sometimes through undercover agents as we saw yesterday — in an absolutely literal manifestation of the asymmetrical antagonism we are describing here, echoing the voluntarily “disproportionate” military response of the loose rockets launched from Gaza by heavy, precise and dreadful bombardments. Asymmetry is the most obvious way of looking at the fighting forces in presence. Nevertheless, reading the situation only through this filter constitute a mistake in the assessment of these forces through their means, and not through their very reason to fight: while the Israeli soldiers fight to enforce order in a state of Apatheid, Palestinians fight for their life as Amira Hass points out in a column yesterday in Haaretz.

The photograph above is particularly expressive of the argument that I would like to make, an argument that I hope not to be too abstract. Would anyone reasonably think that these young Palestinians are actually attempting to destroy with stones this Israeli army watchtower in the West Bank? What about when tanks and bulldozers are being stoned? It would be ridiculous to think so. Stones are like words, they don’t destroy walls, towers or any other heavy military equipment; they are used to manifest their antagonism against their target — the fact that the stones thrown are fragments of a disputed land is certainly highly symbolic too. Stones are tracers that designate that against which they stand politically, and their trajectory materializes the relation between the thrower and his/her target. Visualizing this relation, like on the photographic intervention below, allows us to think of the reciprocity of its effect. The violence of the Apartheid follow the same trajectories onto Palestinian bodies and applies itself with a much greater degree than the stone-tracers.

We should never forget the reciprocity of this relation, despite the drastic difference in the degree of violence, and the stone trajectory reminds us of this. Envisioning Palestinian bodies as absolute subjects/victims of the colonial violence, never helped to dissolute this violence. In July 2014, during the last occurrence of the dreadful Israeli siege on Gaza, I wrote a text entitled “Refraining from the Figure of Innocence” that advocated for our abandon of notions such as innocence and victimhood that both establish hierarchies between the bodies subjected to violence: children would be more innocent, and therefore more victims of the bombings, than their parents; similarly, Palestinian recognized as “non-violent” theoretically bear more credibility in their struggle than the masked, stone-thrower youth do. We can see the perversion in such thinking: the “International Opinion” pretends to wait for every Palestinian to patiently and calmly wait that they all reach the full status of victim to finally gives itself the means to intervene against the Israeli Apartheid violence.

If there is a form of hierarchy to establish within the Palestinian society, it is not one of victimhood that needs to be done, but one of responsibility. On September 30, Mahmoud Abbas announced to the UN that the Palestinian Authority will no longer abide by the 1993 Oslo Accords. As Rashid Khalidi points out, “It’s about time!“, insisting on the responsibility (if not the essence) of the PA in the crystallization of the occupation in their security efforts alongside the Israeli army. The Palestinian bourgeoisie is not the one throwing stones either. Instead it keep assembling them together in the construction of semi-luxurious buildings and gated communities in a pretended indifference (if not mimicry) of the occupation (see the article “Constructing a Bubble: The Two Sides of Ramallah,” as well as the article on the question by Tina Grandinetti in the forthcoming second issue of The Funambulist Magazine). The Palestinian responsibility in the normalization of the occupation was recently made clear, when a recent World Bank report revealed a significant drop in the Israeli economy following the 24% decrease of import of Israeli products towards the West Bank. The boycott of Israeli goods seems to have become another means for Palestinians to act against this responsibility. Many defenders of the Israeli policies think of this boycott as a form of violence and, to some degree, they are right: like stones, the boycott challenges the very foundation of the statu quo and materializes the relation between the colonizer society and the colonized one.

Throwing a stone might be seen as an act of despair, a useless form of resistance against an unmovable colonial system. However, it is a performative act — perhaps even a cathartic one but I am already talking outside of my element here — that materializes the Apartheid relation through its trajectories and that resolutely refuses the useless status of victim, to prefer the one of resistant, however little the effect. The fact that the Israeli government recently took measures against the stone throwers allows us to think that, despite the narrative they provide to the Israeli state for its pretended defensive agenda, this effect affects more the state of Apartheid than the stones’ small impact on concrete and steel would commonly suggest. 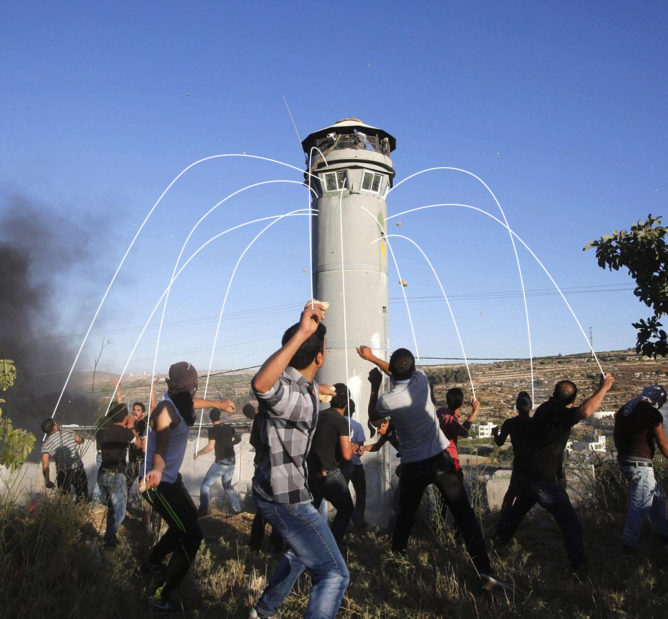