Léopold Lambert – Paris on September 13, 2016
If you enjoy articles of the blog, have a look at The Funambulist Magazine!

On September 9, 2016, Israeli Prime Minister Benjamin Netanyahu released a video in which he affirms that the evacuation of the Israeli civil settlements in the West Bank in the context of the creation of the State of Palestine would constitutes “ethnic cleansing.” These remarks were received with outrage by many defenders of the Palestinian narrative, coming from the head of a State that was created on the ethnic cleansing of over 800,000 Palestinians in 1948, whose families now constitute over 5 millions refugees in the Gaza Strip, the West Bank, Lebanon, Syria and Jordan. Even the U.S. State Department spokeswoman Elizabeth Trudeau judged unequivocally the use of such a term as inappropriate in the context of settlements whose very existence is relatively consensually condemned at an international level. In a column written for Al Jazeera, Funambulist-contributors Nicola Perugini and Neve Gordon deconstruct perfectly such a discourse:

Through his Facebook video [Netanyahu] transforms the colonising settler into the victim of human rights abuses and the subjected Palestinians into the perpetrators who are ostensibly supported – unjustly, according to this distorted logic – by the international community. This, to be sure, is a very strange form of human rights: It is the human rights of a dominant ethnic group whose dominance has been instituted precisely through the expulsion and subjugation of Palestinians. Furthermore, decolonisation becomes a crime against humanity, and the global discourse of human rights is turned into a tool for advancing domination. (“Portrait of an occupation: Human rights of the settler,” September 12, 2016)

The argument that I would like to make here is however slightly different and consists firstly in a critique of our outrage as being fully part (if not the main object) of Netanyahu’s strategy and, secondly, in the paradoxical recognition that the Israeli Prime Minister might, in fact, have a point when he evokes the notion of ethnic cleansing — admittedly, that’s a “hear-me-out!” type of argument.

As I had the opportunity to argue in a recent article for Jewish Voice for Peace, the way we formulate our political outrages are perhaps as important, if not more important, than that against what we formulate them. The way this particular one operates, like many others that focus either on the Israeli settlements in the West Bank — those in Jerusalem seem to be often conveniently forgotten — or on any other designation of Palestine as being reduced to the West Bank, the Gaza Strip, and potentially East-Jerusalem, conveys a collective imaginary in which the historical event that needs to be recognized by all is the 1967 illegitimate invasion of the (then under Jordanian and Egyptian administration) “Palestinian territories” by the Israeli army — along with the still-occupied Golan Heights in Syria and the Sinai Peninsula in Egypt — as well as their subsequent occupation and civil colonization. Netanyahu’s remarks intend to keep us within this narrative that fundamentally denies the ethnic cleansing from Palestine of half of the Palestinian population in 1948 by the Zionist paramilitary groups later gathered under the newly created Israeli army. We should not formulate our arguments and visions of the future on the terms ‘brought on the table’ by a person like Netanyahu. It is my conviction that doing so would be an equivalent positioning than the ones of these NGOs negotiating the route of the Apartheid Wall to more or less successfully accommodate localized Palestinian needs and thus finding themselves accomplice of the process as a whole, as Eyal Weizman argues throughout The Least of All Possible Evils (Verso, 2011).

Where I think that the notion of ethnic cleansing need to be taken seriously holds in the fact that whoever understands the fundamental crime that the 1948 Nakba (or the still ongoing forced displacement of the Bedouins of the Negev) constituted should not condone the forced displacement of anyone who is born and has lived their entire lives in a certain place — admittedly, this definition does not include the entire settler population, far from it. Of course, the current Israeli settlements in the West Bank and Jerusalem have been built or retroactively legitimized by the successive Israeli governments in violation of the Fourth Geneva Convention and they are designed through extreme process of weaponization of architecture against the Palestinian people as I have argued many times. There is therefore no vision of an acceptable future that would not see them absolutely decolonized, as well as desegregated — their decolonization would mean very little if their current racial segregation would be replaced by a social one. Furthermore, given the racist ideology through which many of the settlement’s current residents seem to envision society, it is likely that an important part of them would not tolerate to live in a desegegrated environment and, for better or for worse, would willingly move out. Once this is said, we have to embrace the fact that anyone willing to live in a post-Apartheid condition should be authorized to stay as simple citizen of such a new society — the not-so-well-known case of the 200,000 French settlers who stayed their entire lives in Algeria and acquired the citizenship after the 1962 independence can be useful in this matter, despite some obvious differences.

This suggests an important question: if the notion of ethnic cleansing makes sense in the designation of a forced displacement of an ethnic group, whatever it might be, who is its perpetrator? In Netanyahu’s speech, the answer is clear: the new Palestinian State would be the perpetrator in this case, but in the two historical cases of settlements evacuation in the Sinai in 1982 and in Gaza in 2005, it was actually the Israeli army (ordered both times by Ariel Sharon then respectively Minister of Defense and Prime Minister) that forced out the few thousands of Israeli settlers from their homes and destroyed the settlements subsequently not to leave these infrastructures to Egyptians and Palestinians. Regardless, the satisfaction that we might have experienced during the so-called “disengagement” in 2005 Gaza drastically contrasted with the dreadful last decade of economic and food blockade, as well as recurrent bombardments, regular invasions and the thousands of Palestinian deaths they triggered should be an indicator for us to position ourselves against such forced displacements. The crucial point in the articulation of a vision of the future is therefore to define one where displacement is not thought through the spectrum of order and constraint, but rather through the enabling of all (including the 5 millions Palestinian refugees) to move according to their wish.

These questions and the necessity that we have to think of the future of Palestine through our own terms allow me to introduce the work that I have been doing for the exhibition Chapter 31 curated by Mai Kanaaneh and Nadia Jaglom (Sarha Collective) and recently displayed at the P21 Gallery in London (introductory text below). 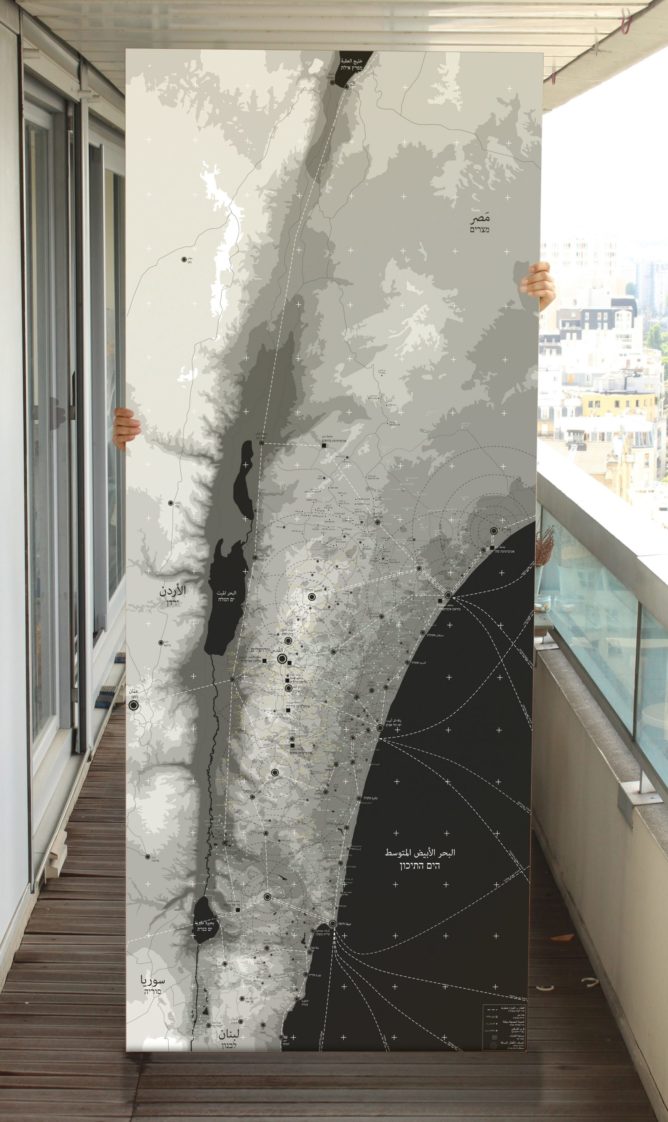 See high-resolution photographs of the map in Arabic/Hebrew or its English translation. 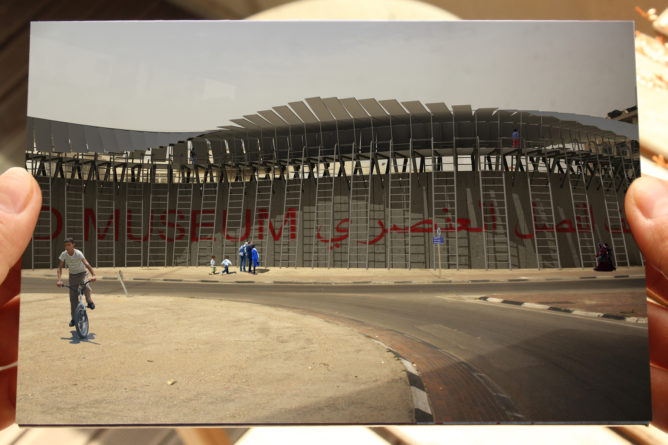 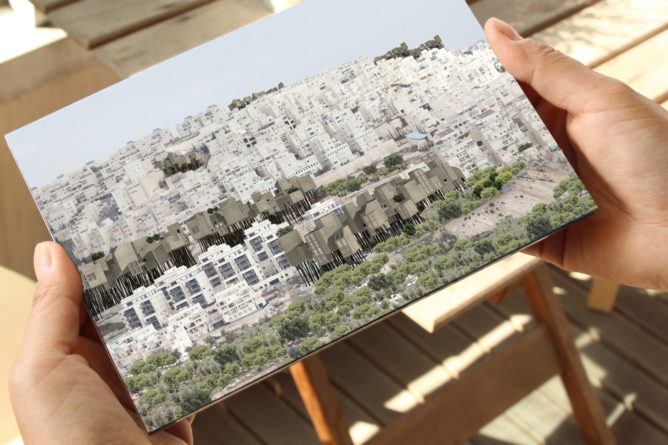 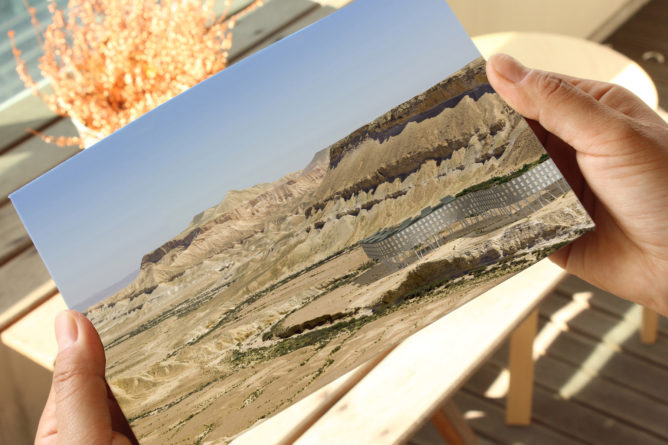 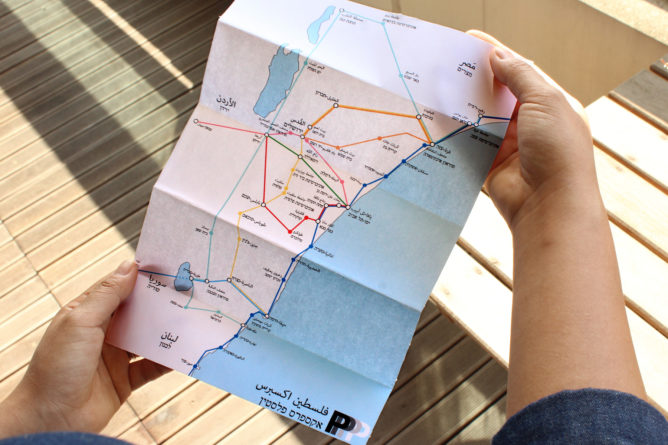 The objects presented here are relics of a future; a future in which the various territorial and legal apparatuses forming the Israeli apartheid have been dismantled. In it, Palestine has become more than the “binational state” often wished for: it has become a multinational territory, whose open borders no longer discriminate which bodies are allowed to return to it, and which ones are to be prohibited from doing so. These objects tell us stories about new buildings that either memorialize the past of this territory, or organize its present. While the Museum of the Nakba, the Intifada Memorial, the Apartheid Museum and the Qalandiya Museum join Yad Vashem in the memorialization of the tormented history of Jewish, Arab and Bedouin Palestinians, the Jericho International Train Station, the Gaza Harbor, the Bedouin University of the Negev, the New Gaza University and many more infrastructural and academic buildings constitute the new nodes of Palestinian daily life. Trains and ferries keep Palestinians close to their neighbors and family members abroad: one hour to reach Beirut, Damascus or Amman from Jerusalem, three to reach Cairo from Rafah, one day to reach Istanbul from Haifa, etc. What used to be colonial settlements could have easily resumed their segregative function if left to the upper middle class of this new society. However, they were transformed instead into temporary hosting towns for the hundreds of thousands returnees, waiting to relocate to the newly built villages in the erased tracks of those evicted and demolished in 1948.

The story does not tell where these objects were found; they might even be the mere products of our imagination, but as Puerto Rican poet Martín Espada writes, “no change for the good ever happens without it being imagined first.” In order for imagination to become a revolutionary force, it needs to be reclaimed and decolonized by the same people from whom it had been captured.