Léopold Lambert – Paris on January 29, 2019
If you enjoy articles of the blog, have a look at The Funambulist Magazine!

July 1961: the Algerian Revolution is almost seven years old and, although it has lost the war at a military level — the two last years of the military offensive led by General Maurice Challe has killed 26,000 soldiers of the Algerian National Liberation Army (ALN) — it is close from the final victory against French colonialism, as it has managed to give to its struggle an international dimension. No more than three months earlier, the four French generals Challe, Salan, Jouhaud, and Zeller had taken over Algiers, deposing the French delegate to the government Jean Morin, and the Minister of transportation Robert Buron (who had the bad idea of making a visit to Algeria that day) on April 21. The next morning, they announced their intention to lead the military to invade France, take power and implement policies to keep the French rule in Algeria forever. In reaction, the French government declares the state of emergency (which will cover the entire end of the Revolution and beyond, and be used to provide the conditions of the October 17, 1961 massacre of 300 Algerians in Paris) and the French President, General De Gaulle (who himself came back to power after another coup d’etat in Algeria three years earlier) declares to apply the Article 16 of the Constitution that was drafted for him in the summer of 1958, which gives him full power to govern for a time that only him gets to decide. Meanwhile, tanks are set up in front of the French Parliament (despite the fact that Article 16 had just made it obsolete) and a machine gun is set up in the salons of the presidential palace. The coup is however a failure and a few days later, the generals surrender.

The state of emergency and Article 16 however remain (the state of emergency until September 30, 1963 and Article 16 until September 29, 1961), thus making 1961 France a regime hardly distinguishable from a dictature. It is in these conditions that the De Gaulle government negotiates in Evian, France (whose mayor was assassinated a few months earlier by the settler terrorist organization OAS) with the Algerian Republic Provisional Government (GPRA) in order to define the future of Algeria. Although France has always claimed that in such a scenario, its first priority would be to protect the European settler population, as well as the Jewish and Muslim Algerians who would like to remain French citizens, the main object of debate is that of the Algerian Sahara, which contains the precious oil and natural gas exploited by France, as well as the site of the French military nuclear testing (which will remain there four years beyond the Algerian independence before being transferred to another French colonized territory, Tahiti-Nui).

It is in these conditions that De Gaulle commissions French parliamentary Alain Peyrefitte to consider scenarios of a partition of Algeria in which French interests will remain. In a report that was shortly later published as a book, Peyrefitte thus imagine six hypotheses of partition in a program that he (and many with him) candidly calls an “Israelization of Algeria.” The idea would be to declare the Sahara southern region a “neutral” territory, while the populated north of Algeria would be divided between the new independent Algerian state and another one gathering the European settlers and Algerians who would like to remain French, closely affiliated to France. Although Peyrefitte systematically refers to Israel and its successes (!) throughout his report, he writes that he would prefer a “French-Muslim Lebanon” than “a French Israel” — he indeed considers the hostility of Israel’s neighbors as somehow not desirable for this new state! The most limited scenario would consists in two French ‘islands’ around the cities of Oran and Bone (current Anaba), where the settlers are in majority, while the most extensive one would cover the entire northwestern part of Algeria, all the way to Algiers, which is imagined as a shared city in all hypotheses — remember, we are in the summer of 1961, exactly when the Berlin wall starts to be built.

In the end, this project of partition of Algeria will be quickly disregarded (provisions on the Sahara will however not); perhaps they were even meant for De Gaulle to put pressure on the GPRA during the negotiations. However, this project provides at least two teaching points. The first one concerns the colonial project in general, and French colonialism in Algeria in particular. What this partition project demonstrates is the sustained attempt for colonial powers to trace lines in maps according to their interests (Peyrefitte’s maps all show the location of oil and gas pipelines), regardless of the impact of their materialization ‘on the ground.’ In her book Mirages de la carte: L’invention de l’Algérie coloniale (Mirages of the Map: The Invention of Colonial Algeria), French historian Hélène Blais illustrate how the French military cartographic survey of the Algerian Sahara after that the colonization of the coastal territory had been more or less secured in mid-19th century, was simultaneous with the trace of line-based borders to define Algeria as a precise colonial territory — regardless of the fact that, to the exception of Italian-colonized Libya, all territories beyond these lines were already or soon-to-be under French colonial sovereignty too. In a desert where no element suggests the presence nor the necessity for sharp thick-less borders, such a colonial enterprise appears in its whole absurdity and violence. The later dreadful lines traced in 1916 by British Colonel Mark Sykes and French diplomat François Georges-Picot splitting the Levant in two areas dominated by the French colonial empire (Syria and Lebanon) and the British one (Iraq, Kowait, Jordan, Palestine) are perhaps even more blind to the violence of their arbitrarily dividing borders.

The second teaching point consists in seeing how this rhetoric of “israelization” allows an additional retrospective reading of the Zionist project — also the alternative vision of Zionism remaining only a project much like the French one. What the 1961 partition of Algeria project (13 years after the violent creation of the State of Israel) shows us in what very few now would not call its absurdity and its violence, is that the 1947 United Nations partition plan of colonized Palestine between its Jewish population (and the hundreds of thousands who will later become settlers in Palestine) and its Arab population was in no less (if not more, given that the French plan would probably have not intensified its settler colonial policies towards the newly created state) absurd and violent. Furthermore, the UN plan also remained a project, while the actual partition that resulted from the 1948 Nakba (initiated weeks before the end of the British mandate) violently evicted 800,000 Palestinians from Palestine, without them having been able to return since then.

Through this final attempt to keep a colonial grasp on Algeria, the last symptom of denial that the Algerian Revolution had overcome, France thus replayed the game it had been playing for two centuries to the detriment of millions of colonized populations in Africa, South and East Asia, the Caribbeans, the Americas, the Levant, as well as the Pacific. This partition of Algeria project could now be read as the colonial farce that it did not realize it was when it was designed; yet, the consequences of other plans of the kind, and the sustained structures of colonialism (whether in the dependences manufactured for the West African former colonies, or in the daily experience of the sub-citizens of France in its so-called “overseas territories” and its internal white-supremacist society) prevent us from not taking seriously what this document envisions. While the French colonial state could not imagine a fully independent Algeria and pathologically continued to fundamentally differentiates the Natives from the Europeans, the Algerian National Liberation Front (FLN) had been cleared from their very first declaration that any person living in Algeria who would like to remain there after the independence will become an Algerian citizen, equal in rights with the rest of the citizenry. Admittedly, after eight years of a war that saw over a million of Algerians being killed by the French army, the settlers, and the harkis (Algerians fighting for the French army/police), the circumstances were not ideal for this process of desettlerization to occur and, in the end, very few former settlers became and remained Algerian citizens. Yet, this FLN vision being literally a decolonial project in contrast with the French partition project, it remains for us a horizon for which we must fight in other circumstances.

The research for this text is part of an on-going book project entitled Etats d’urgence: Une histoire spatiale du continuum colonial français (States of Emergency: A Spatial History of the French Colonial Continuum) to be published by Lux éditeur. 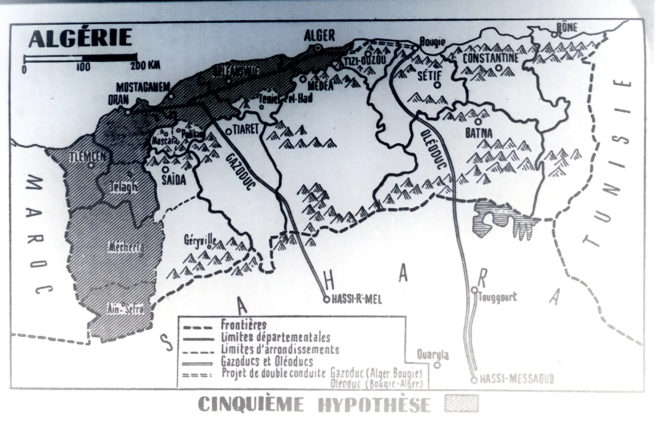