Léopold Lambert – Paris on February 2, 2016
If you enjoy articles of the blog, have a look at The Funambulist Magazine!

This article can be read in the continuity of a previous one, written on December 12, 2015 and published under the title, “State of Emergency in France: An Architectural Reading of the Police Perquisitions.”

It has now been 50 days that France is living in the state of emergency, declared in the wake of the November 13, 2015 attacks and voted in the form of a law by the Parliament on November 27. Although the duration of this state of exception was fixed to three months, and should therefore be ended by the end of this month, the government already announced its intention to push for an extension — “until we get rid of ISIS” even said Prime Minister Manuel Valls to the BBC a few days ago! — which should transform the exception into a rule as it is often the case in this kind of situations. A recent poll have shown that a majority of French citizens are in favor of such an extension. What this poll does not reflect in any way, is the extreme inequality of application of the state of emergency on different bodies. For many, the sole experience of this state of exception consists in seeing armed soldiers and police officers in the streets and accepting the search of bags at the entrance of large shops. Others who live in the various banlieues of the country (in large cities just like in small towns, on metropolitan territory just like on ultramarine territories) may experience the exceptional latitude given to the police forces in its racist violence. More than 3,000 individuals, families, companies and Muslim communities have thus seen their private space violated by the brutal intervention (50% of the time, at night) of police squads leading administrative perquisitions, sometimes breaking doors (see previous article) and turning the space ‘upside down’ to finally find nothing of interest in the overwhelming majority of cases.

If most of theses searches leads to no conclusive results, it is neither because people whose homes are searched would be too smart to leave tracks of potential relation with future attack projects, nor because the secret services would be incompetent: it is because most of these perquisitions does not aim at finding anything in particular. They are used as an intimidation method against persons and communities considered as practicing a radical interpretation of Islam — in the context of a quasi-religious republicanism and its secularism, such practice is considered as sociopathic, if not illegal, by the authorities — but, also, as a means to construct a police cartography of private spaces, which is an opportunity that only rises during the application of a state of exception. 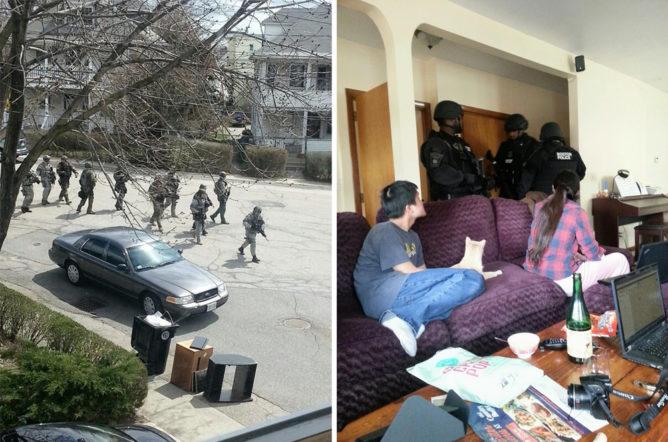 Such a cartographic process, regardless of its degree of deliberateness, had stroke me in the context of the April 19, 2013 Boston Police manhunt of Dzhokhar Tsarnaev, suspected (and since then, found guilty) to be the co-author of the Marathon bombing four days earlier (see past article, as well as podcast conversation with Philippe Theophanidis, transcribed in first issue of The Funambulist Magazine). More of 2,500 police officers had then been deployed in several parts of the city of Boston and the city inhabitants had been strongly invited (forced in the searched areas) to remain at home, leaving the public space of the city to the sole police for a full day. One of the main elements of this manhunt consisted in the systematic search of hundreds of homes by fully armed police officers contrasting (as visible on the photograph above) with the domesticity of houses. The very principle of such a perquisitive search consists in a form of police knowledge production. If it was executed by single-function robots — we can think of those deployed in Steven Spielberg’s 2002 Minority Report — such a knowledge production might be reduced to the simple aim of the search, in this case: is or is not the tracked person present in the searched dwelling?However, police officers in Boston just like in Paris are not single-function robots, they are humans who can see beyond the single aim of their mission and behave according to their subjectivity, which makes their intrusion in domestic space even more violent. These humans then write and archive reports that crystallize their observations of a realm to which they are not usually granted access, thus constructing a unique cartography of spaces unrelated to the function of their exceptional mandate.

To put it simply, let’s ask this question: what happened to those of Boston residents who were found with illegal possession or activities (independently from the manhunt) in the houses that were searched by the police? Were they searched again a few days later by police officers who came back on their tracks? Here again, the police function is not uniquely based on the detection of illegal activity and the production of knowledge does not stop here: the cartography of private space they are able to construct through the exceptional latitude that the state of emergency attribute to them, encompasses the entirety of these spaces, whether estimated as suspect or not. Their understanding of a given city acquires a degree of precision that non-exceptional legislation would never allow.

In the case of France, it is not just any part of the city (and therefore, not just any body) that is searched. As described many times on this blog (see the Paris Banlieues series), the French banlieues are suburban spaces segregated from the cultural and economic city centers, where lives an important amount of families originating from the former French colonial empire (many of which are Muslims) in a broad context of economic precariousness. As described in a past article entitled “The Banlieue Battleground: Designing the French Suburbs for Police/Military Interventions,” the French police develops an antagonist relationship to these neighborhoods and intervenes within them (whether through design, or actual physical intervention) mostly through a suppressive scope. The potentiality for them to intervene fully armed and search apartments and community spaces therefore constitutes for them a unique opportunity to acquire and archive a precise cartographic knowledge of what they consider as the bastions of the adversary (“the enemy,” if they add individual racist ideologies to their already colonial collective function). Just like the members of the government with functions related to “public order” realize that their dubious function is facilitated by the ongoing state of emergency, the police see in this legal exceptionalism — this is not the absence of the law but, on the contrary, the abusive power of law enforcement — a chance to exercise its power with no accountability. Only the various incarnations of the judicial power — most of them are not known to disavow the action of the police as we are regularly reminded — are able to cancel the legitimacy of a search as it has been the case in the recent days. Nevertheless, the cartographic knowledge of the police is not cancelled at the same time than is the legitimacy of the search. This dimension of the state of emergency is de facto accumulated and archived, if not administratively, at least in the individual memory of each police officers.