Léopold Lambert – Paris on August 14, 2016
If you enjoy articles of the blog, have a look at The Funambulist Magazine!

On August 12, 2016, Mayor of Cannes David Lisnard promulgated a formal ban on full-body swimsuits worn by some Muslim women on the city’s beaches — these swimsuits are oddly designated as “burkini” when the apparel seems to be a beach equivalent of the chador, not of the burka. The ban stipulates the following: “Access to beaches and for swimming is banned to any person wearing improper clothes that are not respectful of good morals and secularism.” This sentencing regulates the amount of epidermic surface that should be exposed, while strongly recalling phrasing we usually encounter, which fixes the amount of epidermic surface that should not be exposed, proving if need be that these two injunctions although seemingly opposed are, in fact, the same. As it was already the case for the 2010 French legislation forbidding any individual to have their face dissimulated in public space (see past article), explicitly drafted against Muslim women wearing the burka or the niqab, we could insist on the demagogic dimension of such laws, targeting a significantly small amount of persons to engineer an electoral spectacle.
Then again, we should also examine them for their deeper signification and what they reveal about the way the French society is still operating on its colonial bases. It would be indeed a mistake to read this recent municipal ban through the spectrum of a recent European “resurgence” of discriminatory policies, some of which have to do with the over-mediatization of the few dozens of thousands of migrants and refugees whose bodies have been used as a recurrent televisual material for the last recent months, some others with the ongoing State of Emergency in France (one of the reasons invoked by the Mayor). When it comes to French islamophobic and racist politics, in particular the colonial fetish constructed around the colonized woman’s mode of being and mode of dress, the logics behind them are to be found deeper into history.

On May 13, 1958, the French colonial authorities in Algeria organized the spectacle of Algerian Muslim women ceremonially taking off their veil and burning it in the demonstration of liberation from the patriarchy — a liberation that colonization would have supposedly enabled. This event was probably in Frantz Fanon’s mind when he wrote the first chapter of his book L’An V de la Révolution Algérienne (“The Fifth Year of the Algerian Revolution,” translated into A Dying Colonialism, 1959), entitled “Algeria unveiled”:

Every rejected veil disclosed to the eyes of the colonialists horizons until then forbidden, and revealed to them, piece by piece, the flesh of Algeria laid bare. The occupier’s aggressiveness, and hence his hopes, multiplied ten-fold each time a new face was uncovered. Every new Algerian woman unveiled announced to the occupier an Algerian society whose systems of defense were in the process of dislocation, open and breached. Every veil that fell, every body that became liberated from the traditional embrace of the haik, every face that offered itself to the bold and impatient glance of the occupier, was a negative expression of the fact that Algeria was beginning to deny herself and was accepting the rape of the colonizer. Algerian society with every abandoned veil seemed to express its willingness to attend the master’s school and to decide to change its habits under the occupier’s direction and patronage. (42) 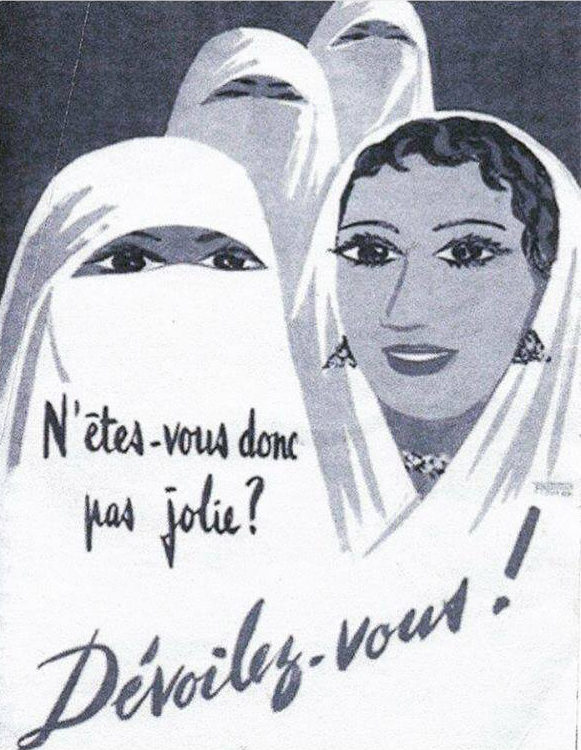 “Aren’t you pretty? Unveil yourself!” Colonial poster enjoining Algerian Muslim women to stop wearing their veil, playing on double meaning of the word “unveil” (1958). Similarly, the phrase “Aren’t you pretty?” is ambiguous in whether it exclaims “you are pretty!” or asks “are you hiding the fact that you’re not?”

The state’s forceful unveiling of the colonized Muslim women is thus fully part of the universalist project envisioned explicitly by the colonial regime — universalism being calibrated on the French vision of society, of course — but we should also read it through the spectrum of patriarchy and misogyny; that against which it claims to be mobilized. A 1959 colonial poster enjoining Algerian women to “unveil [them]selves” through the ambiguous question “Aren’t you pretty?”, shows that beauty, a seemingly innocent and benevolent value, is a weaponizable concept in the establishment of this universalist project by either colonial or imperial power. In this regard, France is not the only entity that constructed such an ideological narrative around this value. In her text “The Biopower of Beauty: Humanitarian Imperialisms and Global Feminisms in an Age of Terror” (2011), Mimi Thi Nguyen examines how beauty was also mobilized by the US government in the first weeks of the invasion of Afghanistan in 2001. Her essay focuses more particularly on the Kabul Beauty School, established “by the nongovernmental organization Beauty without Borders, sponsored in large part by the U.S. fashion and beauty industries.” Beyond the capitalist logics that accompany Western armies invasions — the colonized population is always considered as a potential profitable market — we should insist on the imposition of Western standards of beauty on colonized (or ‘imperialized’) bodies and the dispossession of agency that results from it.

In this regard, it is not innocent that the Cannes ban described at the beginning of this article takes for site a summer beach. As an obstructed piece of land, the beach is a site necessarily exposing bodies. Numerous geographical contexts also attribute to the beach a normativity that expects bodies to expose themselves through lighter apparels that facilitate the bodily experience of the sea. Because patriarchal societies tend to associate the vision of skin with sexuality — and therefore either forbid it or, on the contrary, enjoin it — one of coping strategies (far from being the only one) is a rather literal one and consists in the simple refusal of such an exposure to the dominant gaze. This refusal is understood as a violation of the norm in proportion of how much the judging body contributes and benefits from the latter. When such a refusal is inscribed in a longer history that mixes the imaginary of the past colonial segregative legislation with current racialist normativities, it appears as absolutely unacceptable for the dominant bodies. This is how we encounter pieces of legislation crystallizing the norm determining the rather arbitrary number of how much skin surface should or should not be revealed into enforceable laws. The norm and its policing violence already sanctioned behaviors that differ too much from its standards, but when the law itself is mobilized to implement this sanction, it is the entire state structure and its own policing apparatus that are deployed against essentialized bodies whose personal and collective histories are linked in depth with the history of this violence. Rather than forcing these bodies to comply with the new legislation, it instead organizes their exclusion from the territoriality on which the law applies.

In this regard, we can note that the Cannes ban was made public the same day than a “burkini day” was cancelled at a public swimming pool near Marseille, thus preventing a group of Muslim women to use the pool because of the swimwear they intended to be wearing. If we accept that clothing is part of our identities — whatever degree of intentionality we apply to it — we are obliged to find a concomitance of the ban of mode of dress with the bodies that actually wear them. As written in a past article that examined two quasi-simultaneous eviction of Black and Palestinian bodies in swimming pools of Texas and Palestine, we also need to consider the aquatic milieu that the sea and pools constitute: Water, in its appreciable materiality (in opposition to air), expresses the fact that the bodies situated within it, share a milieu. It thus invokes an imaginary based on the transfer or not of material elements between bodies, in particular, dirt. In other words, water makes it less tolerable for bodies to share a milieu with objects/bodies considered as dirty or abject. Abjection does not however merely stop at the actual aspect of a body ‘ornamented’ with conventional dirty elements, it is also defined by what anthropologist Mary Douglas calls “matter out of place” (Purity and Danger, 1966). The abjection that characterizes racism is thus ‘hypertrophied’ when placed in the aquatic context of the swimming pool or the sea, hence the necessity felt by bodies presuming of this abjection to evict bodies considered as abject from this milieu. The social construction of the abject, manufactured by the norm and crystallized by the law (and continuously reinforced by design/architecture I should add) should therefore be the first structures to dismantle in our political effort.

Addendum (August 27, 2016): The ban taken by Cannes mayor was rapidly followed by twenty-nine other municipalities on the French Rivera. Although all mayors belong to the opposition, Prime Minister Manuel Valls brought his support to these initiatives. On August 26, 2016, the Conseil d’État (the highest administrative court in France) ruled against the ban in the municipality of Villeneuve-Loubet, thus establishing a legal precedent that should extend to the other municipalities, despite the protest of their mayors.

For more, read the third issue of The Funambulist Magazine (Jan-Feb. 2016) dedicated to Clothing Politics.