Léopold Lambert – Paris on February 14, 2017
If you enjoy articles of the blog, have a look at The Funambulist Magazine!

On February 2, 2017, in the banlieue municipality of Aulnay-sous-Bois (North-East), 22-year-old Black man Théo L. was raped by a police officer, while three others were holding him. As of today, Théo is still at the hospital suffering of a 3.5-inch-long tear of his anus. The video showing the crime was quickly spread, provoking outrage country-wide, and making it impossible for police officers to deny the anal penetration with a telescopic baton to which Théo was subjected. However, the officers and the service within the police in charge of the investigation have since made the outrageous claim that what happened was an accident, going as far as forming the phrase “deliberate rape” to describe what the situation was not according to them, in an extremely dangerous redefinition of what a rape actually is: an unambiguous crime with no room whatsoever for interpretation regarding what could be claimed as “attenuating circumstances.” The same night, the cité des 3000 — a cité consists of high-density social housing in low density urbanism — where Théo lives was plunged into darkness while the police undertook numerous identity checks within it. Other banlieues saw young people revolting against armed police officers in full gear operating in neighborhoods that they appear to consider as enemy territory.

The rallying cry of our outrage can be found in the phrase “Théo et Adama te rappellent pourquoi Zyed et Bouna courraient” (“Théo and Adama remind you why Zyed and Bouna were running”), associating the police crime against Théo to the death of Adama Traoré immediately following his arrest in July 2016, and the death of 17-year-old Zyed Benna and 15-year-old Bouna Traoré in an electric closet in 2005 while being illegitimately chased by the police, which had been the starting point of the great banlieue revolts of that year. Although it is important to note that the stories of Théo L., Adama Traoré, Zyed Benna and Bouna Traoré are only the most mediatized of many more instances of police targeting of the Arab and Black youth in metropolitan France and in overseas territories (where the continuity of colonialism is the most obvious, yet remains relatively unaddressed in main media) the organizing done around them is immensely important.

This is why, last Saturday (February 11, 2017), 3,000 of us gathered in front of the High Court of Bobigny, the prefecture of Seine-Saint-Denis, which constitutes the department with the most pauperized banlieues of Paris, including Aulnay-sous-Bois, while other gatherings were organized in a few other banlieues of France. The spatial characteristics of this protest were truly remarkable, which pushes me to describe them here, in relation to the photographs that I could take while being there [***For all of the images taken that day please visit the original post on The Funambulist***]. In contrast to the journalists present who did not have the decency to recognize that covering what happened could only be done through their own subjectivity as limited-in-space bodies, I only present my own photographs here as an embracing of such subjectivity. 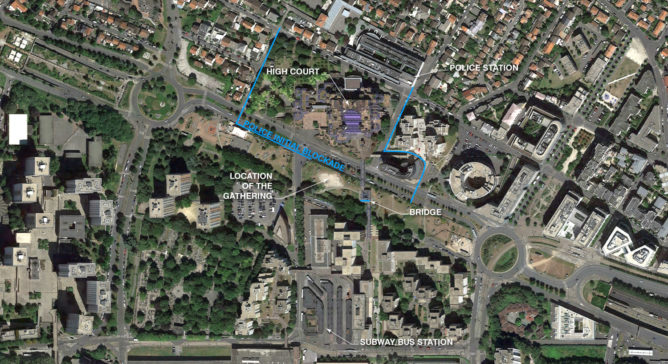 The gathering happened in a strip of land above an underground highway that separates South Bobigny, which includes the subway station, a shopping mall, a few institutional buildings and an important amount of social-housing towers, from the most Northern part of the municipality, where the High Court, the police station and some office buildings share their space with a more house-based (pavillionnaire) residential urbanism. This strip of land that would have trouble qualifying as park as nothing seem to be made to invite any activity in it whatsoever, is augmented by a large avenue and, further, tram rails. The strip is fenced, which allowed the police that day to block the exits fronting the High Court and keep us out of the avenue. The most striking feature of this place is the blue bridge linking the South part to the High Court. At the beginning of the protest, a squads of fully-geared and armed police officer was already in position to block the bridge using what I called a few times the “politics of narrowness” that the bridge architecturally produced as a corridor. Meanwhile, officers from the BAC — Brigade Anti-Criminalité, the easiest brigade to link directly to colonial history, and the most violent one in the banlieues — were taking advantage of the bridge’s overhang to monitor the crowd. In this regard, the symbolic of the bridge’s pyramidal structure did not go unnoticed in the divine monitoring it suggested! It ought to be observed that although I never found myself in a situation where police officers could so easily control the territory, the gaze had certainly some symmetrical characteristics and it was easy for us to monitor the various movements of the police on the bridge too.

After an hour of powerful speeches, calling for justice for Théo and other victims of police violence, as well as insisting on the systemic manifestation of this violence, the crowd, until then solidly gathered, turned to the bridge where about twenty teenagers and young men decided to charge the police. Here again, the spatial characteristics of the corridor makes it easier to defend than to attack, in particular (obviously) when the attack only has small stones to its disposal, and the defense is armed of various incapacitating grenades, flash balls and later, tear gas grenades shot by mortar at us without consideration for any crowd panic that it could create. Later on, dozens of police trucks intervened while tear gas kept on falling from the sky, regardless of who may be under — I found myself in a few situations where we had to run away with mothers and their children. The subsequent car-burning and window-breaking that happened in the neighborhood and particularly in the nearby shopping mall was, as usual, the only aspect of the event described at length by the media and politicians later that day. Various speakers at the protest and other representatives of banlieue association voiced their regret that a few kids would turn to violence to express their rage against the police, while upright alternative media such as Mediapart made a point to address the fact that the fires and stones were only the responsibility of a small minority.

However, we can see how this apologetic or minimizing reactions contributes, as always, to the narrative of the “demonstration, while legitimate, that took an ugly turn” —legitimacy being only brought up when it is placed in contrast of an apparently more important problem. Such a narrative only makes sense if there is a strict discontinuity between the event and recent as well as deep history. Recent history here is an abominable crime committed by four police officers on a young man, as well as the strong and provocative presence of police officers “ready for the battle” aiming their weapons at a demonstration mobilized against the police. My friend and I even heard one of the officers on the bridge uttering the words “un accident est si vite arrivé” (“an accident could easily happen”) referring without doubt to the police qualification of the rape against Théo as an accident to use it as an euphemistic threat. The deep history with which the current police violence is in continuity is the colonial history itself and its structural racism.The indigénat (indigenous administrative status in the colonies and in the “metropolis”) has mutated into a subcitizenry to which belong French citizens whose families were formerly colonized subjects, in particular those who are currently residents of the banlieues. The police in its various degrees of spectacular violence, from the daily controls, intimidations, insults, and humiliations, all the way to rape and murder, is only the most visible materialization of such a citizenry, but we should not be mistaken: this is an administrative and social violence too. 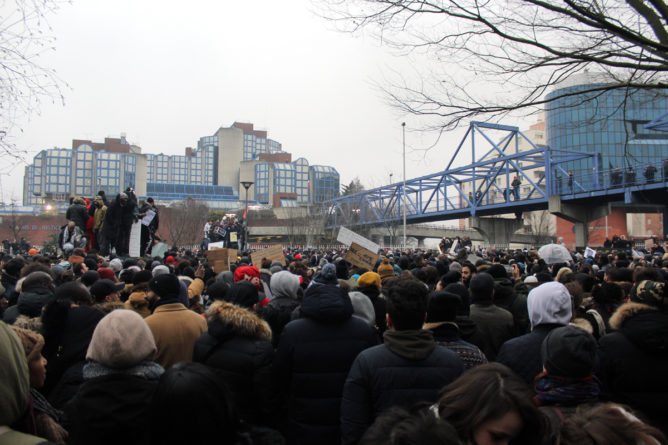 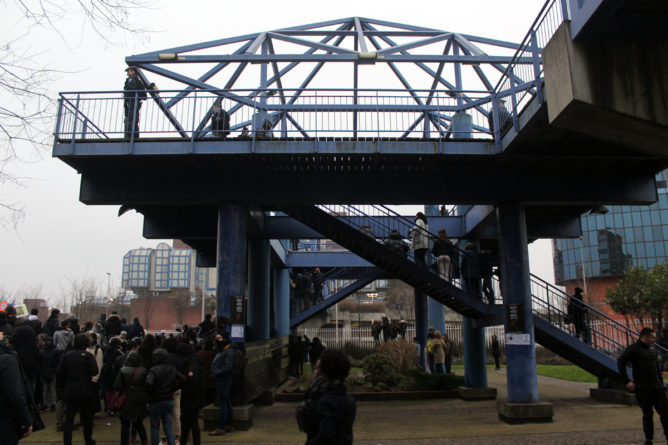 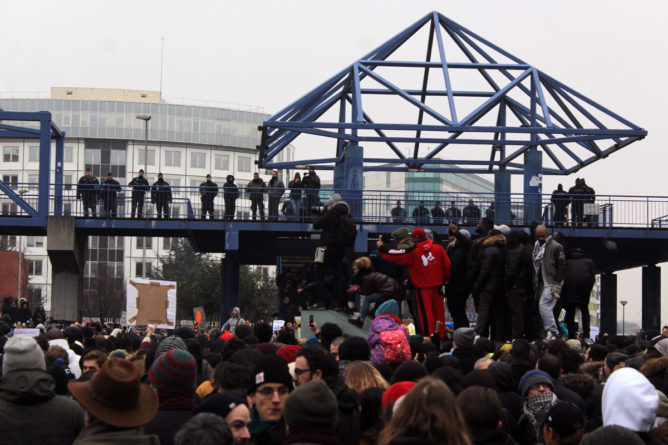 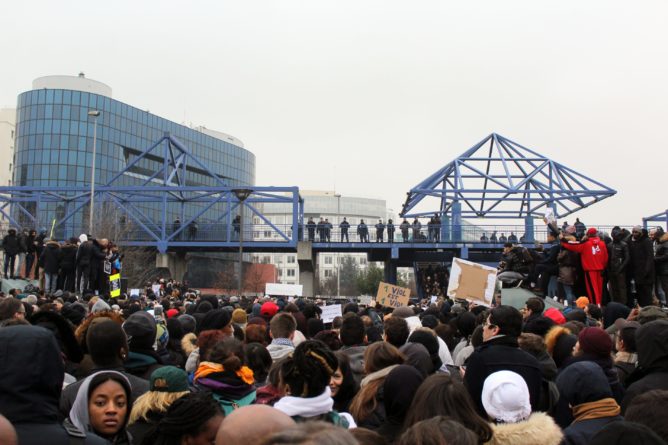 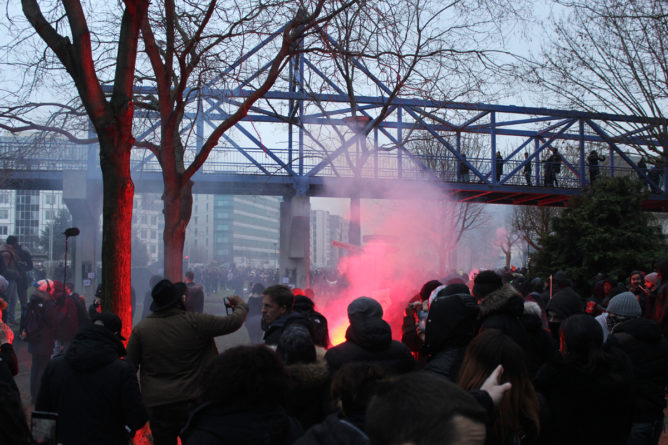 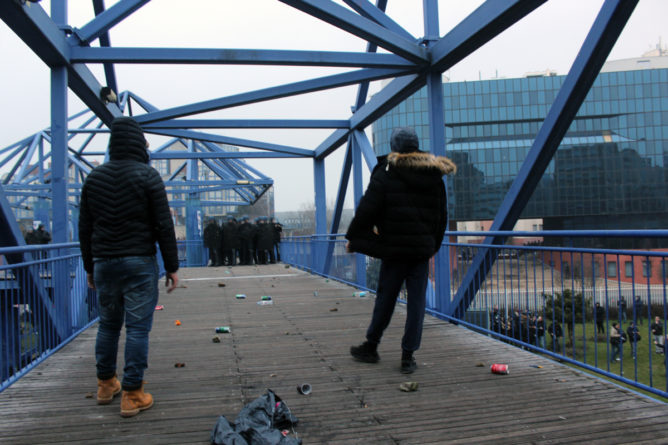 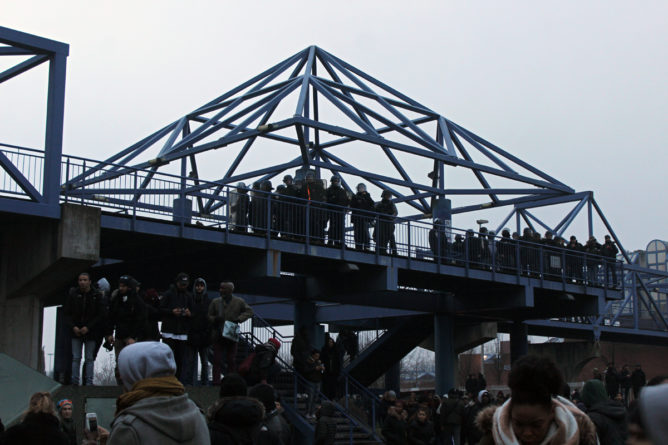 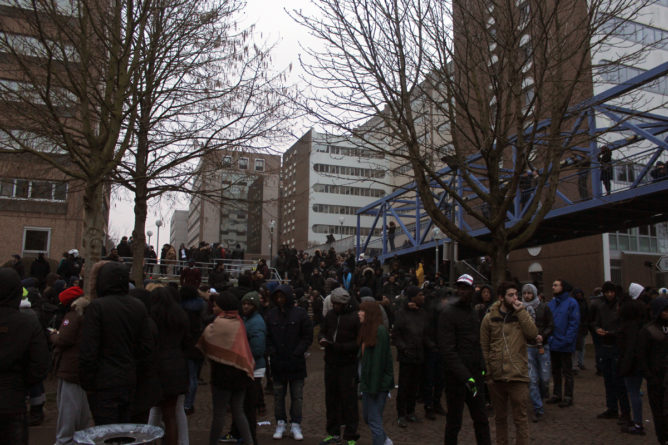 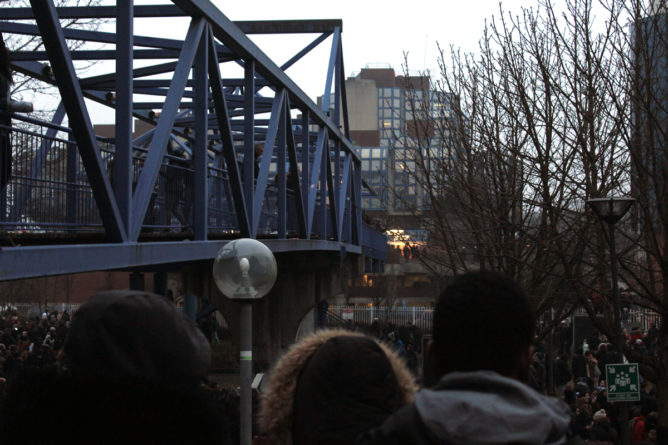 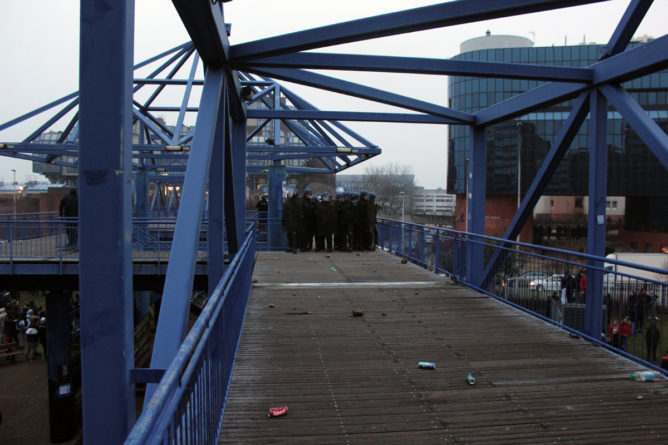 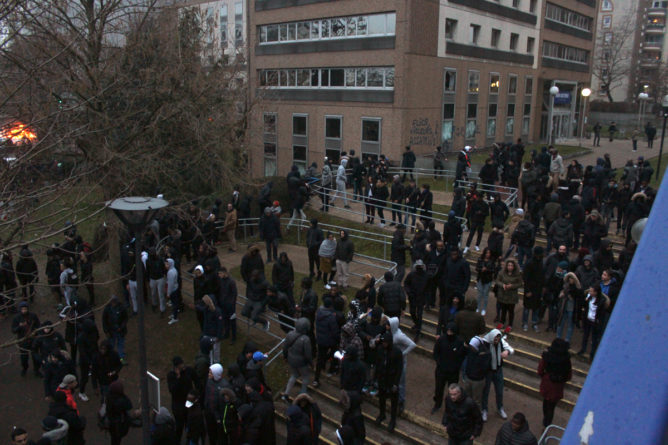 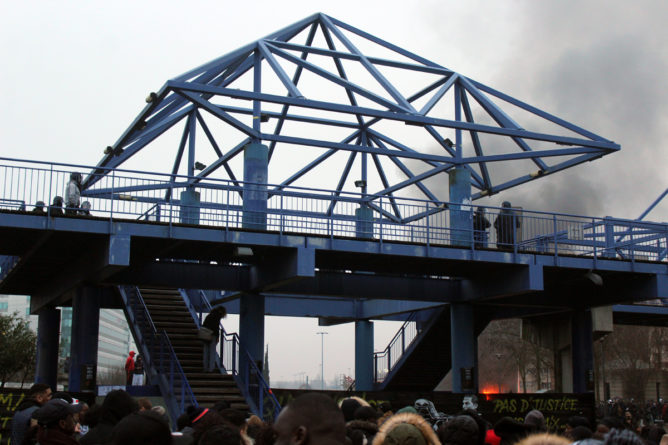 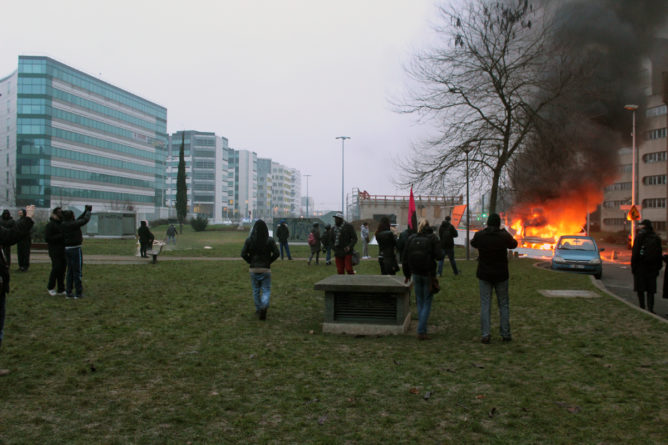 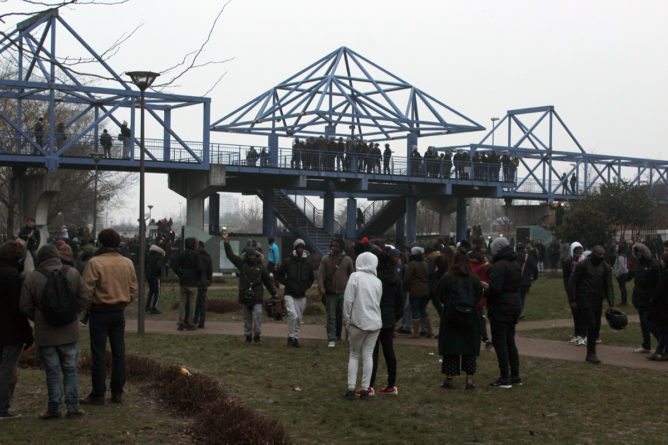 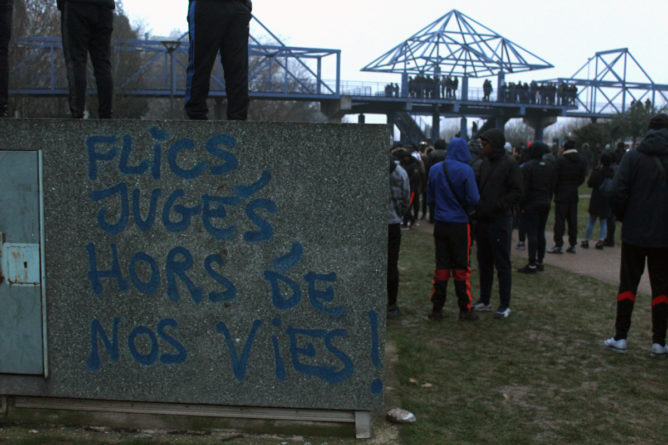 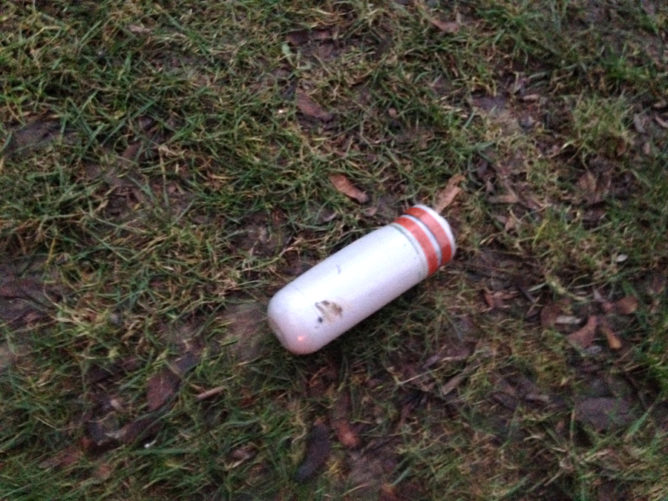 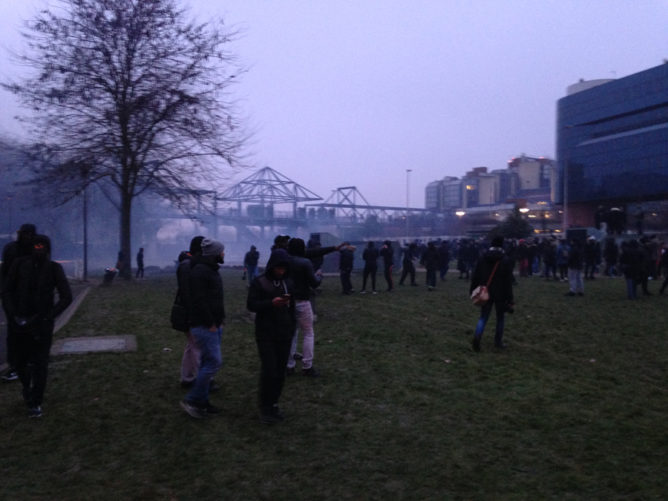 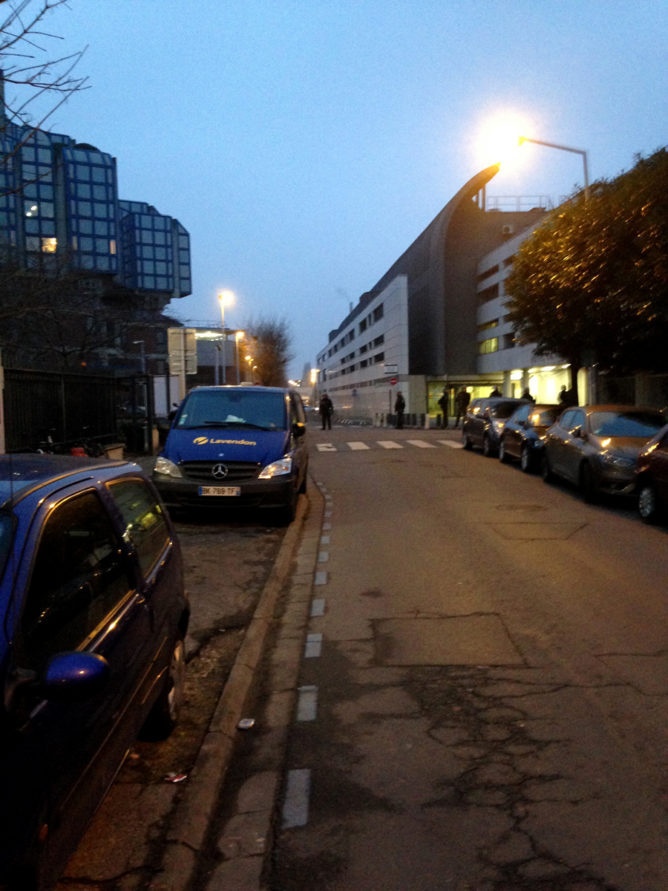