All photos by Merve Bedir (April 2016) / All rights reserved

Report from Calais and Grande Synthe (part 2): (Spatial) Transformation of Migration Control by Merve Bedir, May 19, 2016

I’m in the train to Paris, to meet Léopold for a research visit together to Calais and Dunkirk. During the trip of two hours, my passport and residence permit is checked three times, and my bag is controlled twice. The state of emergency in Belgium and France has been extended for the second time now, which ironically and expectedly increases people’s feeling of insecurity. Move fast in/around the train stations, don’t hang out for too long at the same place.

Based on Léopold’s advice, I go straight to Stalingrad, the ‘arrival neighborhood’ of Paris, right next to Gare du Nord and Gare de l’Est, to see the non-formal camp site under the train tracks. Stalingrad Market sells hardly anything local, but has the world in it. Shop windows are in Russian, Arabic, English, etc. street-stalls-on-cloth offer cell phone chargers, combs, socks, and belts for a quarter worth of the shopping center. The non-formal area for refugees runs all along the tracks from Stalingrad till Jaurès stop, has beds and tents laid out tight together. The basketball court is not in use anymore, and graffiti on every pillar: No one is illegal. Once in while an announcement from above: “Dear passengers, there are pick-pockets at this station, please secure your belongings.”

That same evening we go to Place de la République, where we see two big posters hanging on the three pillars (‘liberty’, ‘equality’ and ‘fraternity’) of the Monument to the French Republic: “Democracy, where are you?” and “Borders kill: Solidarity with the migrants.”

The next morning, we leave early for Calais and Dunkirk. First we go to Dunkirk to check the site of the former encampment. While waiting to become an “eco-village,” the land between the small stadium and the residential neighborhood was used as a temporary refugee camp, managed by the municipality and MSF. Finding out that the new location of the temporary camp is not nearby, we start driving, ending up in another neighborhood, asking around and finding our way to where the camp is re-located (Grande Synthe), right between the highway and the railroad, completely invisible, except for the two police cars at the entrance to the site. Used as a former linen factory, this place is around 20 km away from the first encampment location.

We walk in, start asking people, someone from the volunteer booth takes us to the camp manager. He tells us about the kind of facility Utopia 56 is erecting here together with the refugees; talks further about autonomy and self-organization in the camp, how there will be so much public space for the refugees, etc. We continue to walk, the space feels like a huge left over land between the highway and the train tracks, several things look like they are recycled from something else. There is a functioning carpenter’s workshop, and a common kitchen, a big eating area under construction, a couple of wood baskets for growing plants, two football posts.

We keep walking… I look back to see Léopold talking to a person. Fares (that’s his name) invites us to his dwelling, tells us about how he got here, his back-and-forth trips between Turkey and Greece, Germany and France, the fact that nobody registered him till now, but finally he ended up at the threshold of UK. He says “I came this far, my mom, my brother, my sister are all in U.K. But we spent all our money, now I have to wait here, before I can make it near them as well.” Fares is from Kuwait. He doesn’t know when he was born. He never had an identity card. He worked in Syria and Dubai, before he had enough money to leave. He and his family had a lot of trouble until now, he says “But I know it will all be different when I have the British passport.” I ask him how it compares between the camp before and here, and he responds that he feels neglected here. There were people visiting them from the neighborhood, from the city, bringing soup, sitting down for a conversation. Here, nobody comes, nobody would come, it’s not easy to reach for them, also “people think we are fine, we are taken care of, now, but that’s not the case.” I have to think, because he wasn’t registered until now, will he also be sent back to Turkey, or stay here, or can he ask to be sent next to his family? He doesn’t know if/when he is leaving, or how long he will stay in this camp. Might that feeling of neglect also be resulting from that? 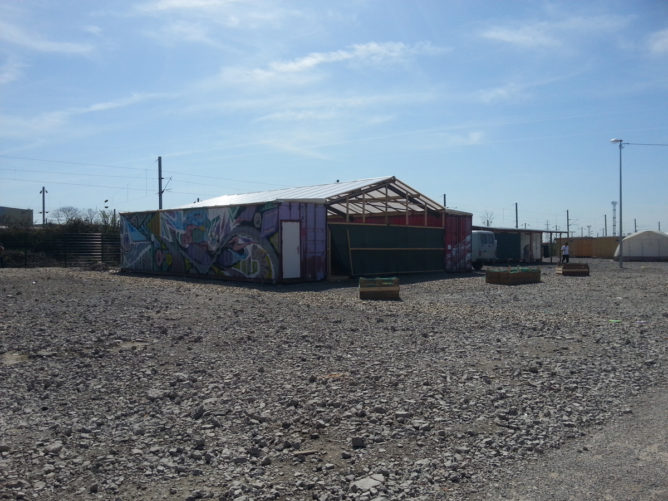 Common area next to the train tracks in Grande Synthe 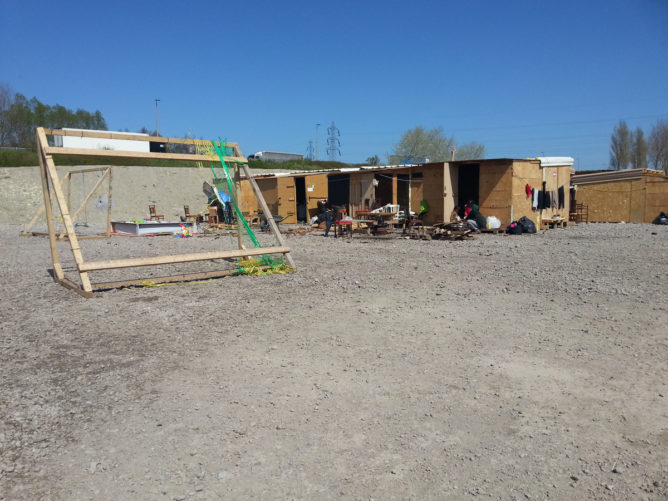 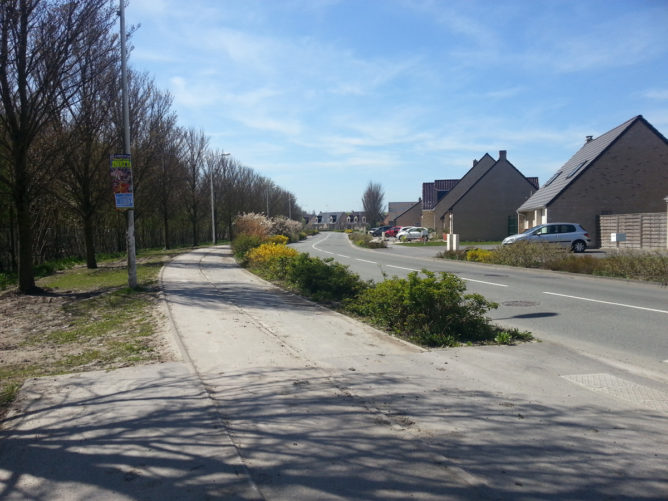 Adjacent neighborhood to the former encampment in Grande Synthe

Calais is another 30-minute drive from Dunkirk, the border construction with three levels of fences and police officers every kilometer prepare us to the ‘security’ regime in effect. We approach the camp site, we find our way to pass the two police officers, who try to dissuade the visitors from entering the Jungle. Only part of the Jungle exists now, the other side expanding towards South is cleared, except for the Ethiopian church. We go through the left overs of the Jungle to reach to the formal camp, where the digital humanitarian shelter, in the form of a container camp in a gridiron layout, is implemented. The containers for the people are exactly the same as the water tanks used for the camp. A white iron fence runs all around the camp, separating it from the Jungle, with security cameras at different spots. The formal camp seems empty, it seems like nobody lives there. On our way out, through the Jungle, we bump into the Embassy for Rojava, a prayer space for the Alawites, the corridor of non-formal economy is still partially there with the hairdresser, the restaurant, the bakery, etc., as well as several flags possibly representing where people are coming from. 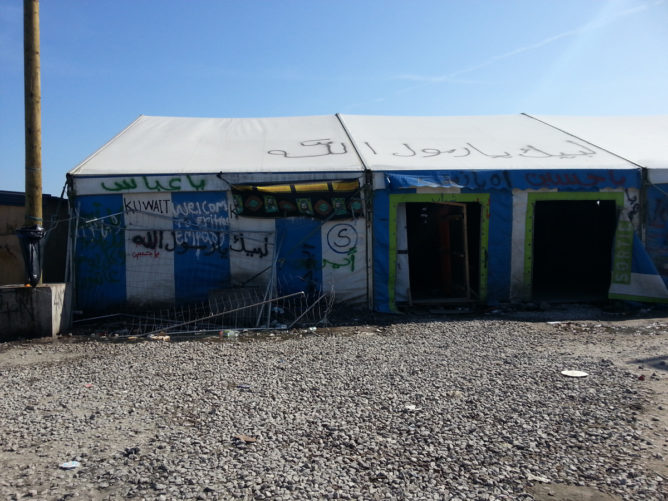 Alewite prayer space in “the Jungle” 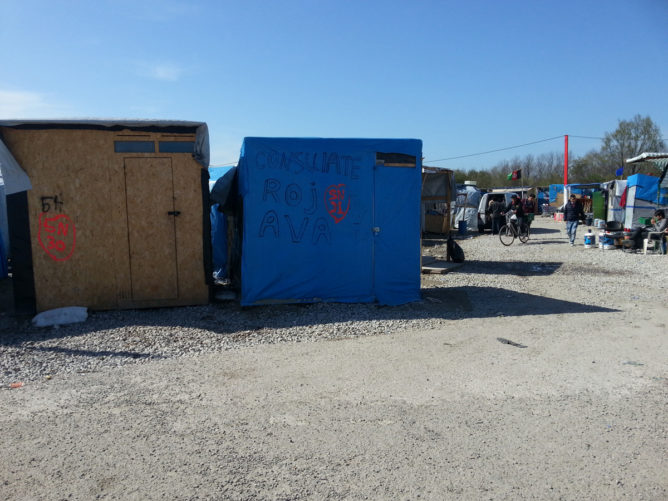 Consulate of Rojava in “the Jungle” 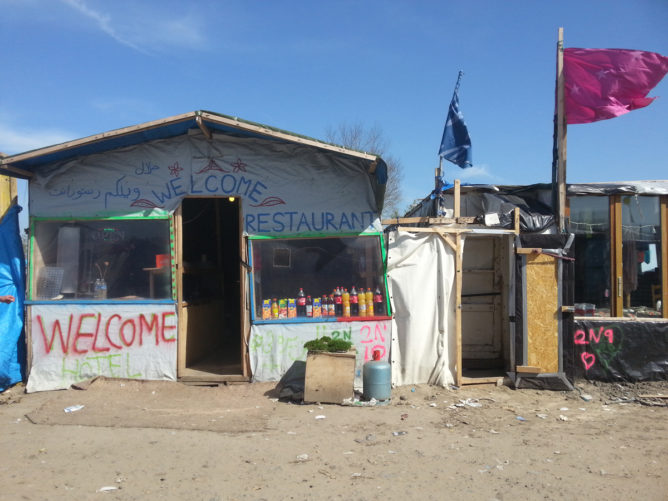 Restaurant in “the Jungle”

It seems, as the migration regime is changing for the EU, the spaces of migration are also transforming. Control and security are becoming more paramount elements of refugee camps, while communicating the message that people are being taken care of.

We cannot think of what is happening in Calais or Dunkirk independent from what is happening in Place de la République. The ‘crisis’ is not about security, because of which I have to be checked 3 times in 2 hours from Rotterdam to Paris; or migration, because of which people end up in ‘waste land’s like Grande Synthe. The ‘crisis’ is about the corruption, the decay of the nation state and our common values, our culture. I remember the piece I read in Volkskrant last week, talking about Lesvos after the EU-Turkey deal, how is Grande Synthe different than Lesvos? Not much, it seems. People are disposable either in Lesvos or in Dunkirk.

Another aspect of what we have seen, is the very existence of the camp. We compare camps to each other, as forms of temporary settlement, discuss budget, security, daily life, economy, formality/informality, etc. But, why don’t we ask what is public in a camp? Is there public in the formal container camp in Calais? Is there public in Grande Synthe? Can we talk about public space without the existence of a public? Can we talk about public, if ‘the future’ is missing from the camp? Can we talk about public, if there is no prospect for people about where they will go, what they will do tomorrow, the next day, in a month, in a year? What is the logic of constructing camps, and new economy around it, if we don’t really know what the purpose of camps for the prospects of people?

Note: The photos attached to this text are complementary to the ones in Part 1 of this blog post.