Léopold Lambert – Paris on November 18, 2017
If you enjoy articles of the blog, have a look at The Funambulist Magazine!

The screen tells us that it is 12:43pm. Saïd, Vinz, and Hubert are hanging out on the small playground of the Cité des Muguets in Chanteloup-les-Vignes (distant northwestern Paris banlieue). Their trivial conversation is interrupted by a voice coming from the car that entered the background on a higher level. “Sirs, sirs!” says the voice. “Hello sirs, it’s for the TV!” says a white female journalist from the window of her car, while her colleague has the entire upper part of the body out from the backseat window, filming the whole scene while his body remains inside the car. “Did you participate to the riots last night? Did you break something? Burnt some cars?” she continues. 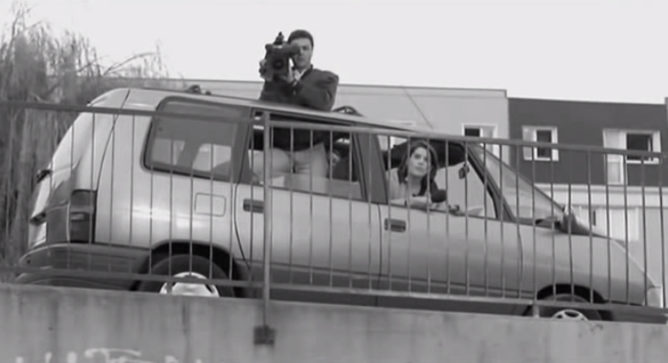 The tone quickly escalates and the young characters of Mathieu Kassovitz’s classic 1995 film, La Haine (written with Saïd Taghmaoui), are caught on tape insulting and throwing a stone at the TV crew — the view through the camera is the only shot from we have as spectator of the journalists’ point of view — a footage that, without doubt, would be used in a televised show that evening, deprived of the context of its production and the reason of their insults. “What’s Thoiry?” ask Vinz later. As Hubert then explains, it is a zoo (only 15 kilometers away from Chanteloup-les-Vignes) that one visits in cars — the full name of the zoo is “Safari Zoo of Thoiry.” 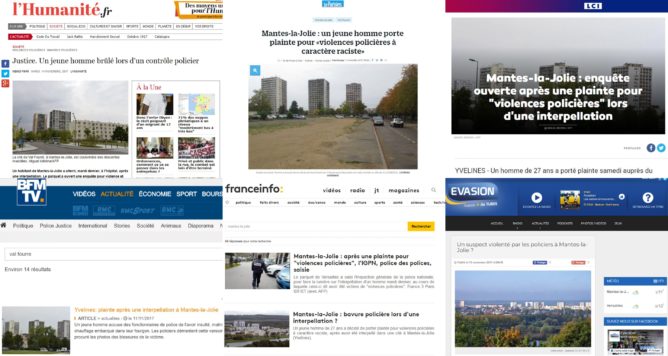 On November 7, 2017, a 27-year-old Black male resident of the Cité du Val Fourré in Mantes-la-Jolie (25 kilometer further West of Chanteloup-les-Vignes) was arrested by the police and handcuffed to a truck radiator in his transfer to the police station (see the photographic series about banlieue police stations to see a picture of it). His hand and arm were severely burnt from the heat and when screaming his pain, the police officers only responded with racist slurs. This news would have gone unnoticed from the French press, like so many other instances of racist police violence; yet, the young man filed a complaint for “acts of police violence with a racist dimension,” which forced most of French media to write about it. In order to illustrate their articles, a certain amount chose generic images of unrecognizable police officers; others, however, wanted to situate their articles and undertook to either photograph the Val Fourré, or use some from their stocks. These pictures strike for their remoteness from the social housing neighborhood. Some are taken from a few dozen meters outside of it (L’Humanité, Le Parisien) with practically no one visible on them, others are as far as a dozen kilometers (Evasion FM). All (to the slight exception perhaps of L’Humanité) convey the point of view of a hidden sniper in a war zone that reminds of the scene of La Haine that opens this text. 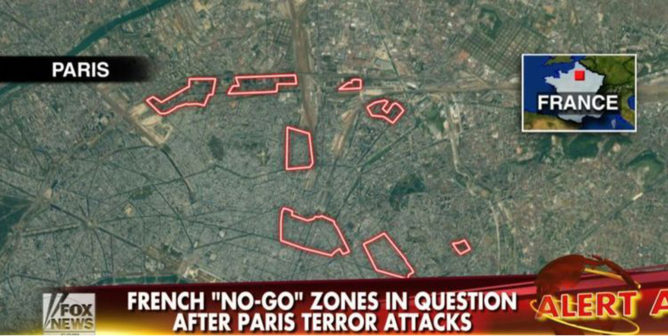 In January 2015, a few days after the assassinations of Charlie Hebdo journalists and the antisemitic murders of four people in a kosher supermarket in Paris, Fox News described how in eight areas of the French capital, shariah law was applied making of these neighborhood “no-go” zones for any non-Muslim person, including the police themselves. It did not take long for the quasi totality of the French press and politicians to be balanced between laughter and outrage at such allegations. Parisians who reside, work or pass by these areas every day deemed “ridiculous” that professional journalists could lie so bluntly.

However, if one pays attention to the limits of these areas designated by Fox News, one can recognize the contours of what used to be officially defined as “Sensitive Urban Zones” by the French government between 1996 and 2014, the overwhelming majority of which being outside the Paris municipality area, in the banlieues (see map on the right). Although designated as areas in which the French state intends to dedicate prioritized funds to improve the conditions of life of their residents (for further explanations, read the recently published article about them by Tanvi Misra), the “prioritization” that one can only observe on the ground is manifested by the police deployment and violence against these residents, most of whom are racialized subjects of a society that never undertook the decolonization of its structures — the police being the manifestation of one of their sharpest dimensions. 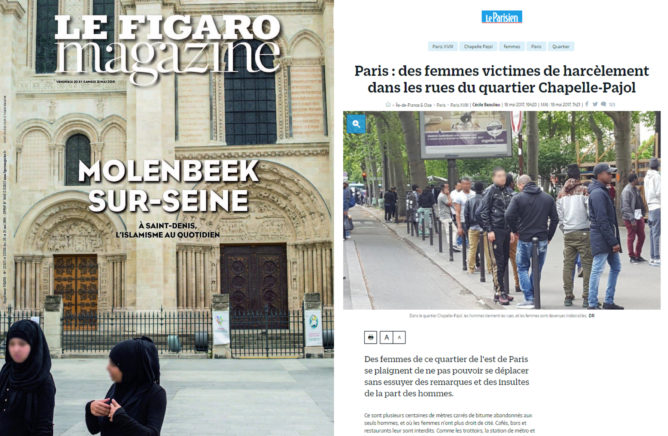 On the contrary of the laughter and outrage that Fox News harvested on this side of the ocean, the way the quasi-totality French press (admittedly, with a varying degree of deliberateness) characterizes the banlieues on a daily basis does not seem to be questioned nor challenged by the predominantly white viewers who never or rarely set foot in any of these neighborhoods. In May 2016, the magazine version of Le Figaro, one of the three main national newspapers, published a reportage entitled “Molenbeek sur-Seine: In Saint-Denis, Daily Islamism.” Beyond its demagogic and insulting use of the name of the Brussels neighborhood of Molenbeek (see past article) and the blatant lies that the articles has to offer (debunked one by one in a brilliant counter-investigation led by Sihame Assbague and Widad Ketfi), one can see that the imaginary conveyed by the cover of the magazine (visible in an important amount of newspaper kiosks of France the week of publication) is one of antagonist contrast between Christianity (i.e. whiteness) with the background embodied by the Saint-Denis basilica, and Islam, manifested here by two women wearing dark hijabs that many readers will associate to burqas, banned in French public space since 2012. It does not take a PhD in photographic analysis to realize that the parallel lines of the basilica facades indicate that the photograph was taken from great distance with a narrow-angle lens, which brings us back to the comparison of press photographers with military snipers.

One year later (May 2017), the newspaper Le Parisien published a similar reportage using the language of investigation, designating the Paris neighborhood of La Chapelle as a no-go zone (admittedly, it does not use that word) for women, because of the presence in the public space of an important amount of men (“groups of dozens of men on their own, illegal vendors, drug dealers, migrants and smugglers”). Here again, beyond the femonationalist (see the podcast interview with Sara Farris) demagogy that motivates the use of what is presented as a consensus in France (the equal right to the city for both men and women) to present a racist narrative, one can focus on the press’ stigmatization of areas of the city where white bodies find themselves in minority. The fact that La Chapelle is situated within the Paris municipality (and therefore is known and experienced by more middle-class white citizens that banlieue municipalities would) and that many of the racialized bodies that use its space can be perceived through a humanitarian narrative (many are East African asylum seekers, unhelped and policed by the authorities) may explain why counter-narratives to the one presented by the press were easier to emerge in this case — one must however acknowledge Leïla Khouiel and Nassira el Moaddem’s hard work of to present a clear counter-investigation.

The “No-Go Zone” imaginary cannot emerge by itself; it needs to be fed every day of images and commentaries that insist on the dangerous otherness that the residents of the depicted areas constitute. The violence that these images suggest or show deprived from any context, constitutes a spectacular smokescreen used to hide the deeper violence in relation to these neighborhood: the social and racial segregation that they materialize and the colonial continuum that this segregation reveal. What would happen if journalists would get off their car and leave their ‘sniper’ equipment? One cannot know for sure and there is no doubt that territorialized stigmatization would require more to be dismantled, but what’s more certain is that the press’ visual production could no longer create so easily imaginaries of zoos or warzones.

Addendum: In the case that it was not clear already, I use the term of “stigmatization” here, not merely to refer to territories and populations that would be considered poorly by the rest of society through this process but, rather, to insist that such characterization is what contributes to a continuity of colonial structures and the legitimization of police violence deployed against them.