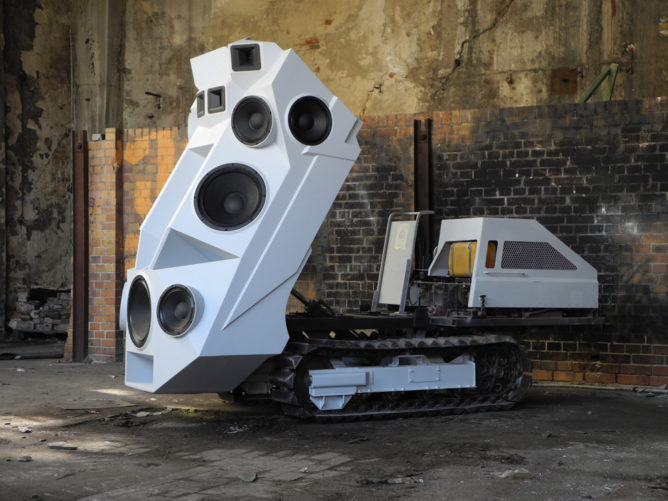 This article is relatively premature as I will soon read Steve Goodman’s Sonic Warfare: Sound, Affect, and the Ecology of Fear (MIT Press, 2012), as well as Hillel Schwartz’s Making Noise: From Babel to the Big Bang and Beyond (Zone Books, 2011); yet I felt the need to already construct an inventory of weaponized designs that mobilize a dimension of affect we tend to forget when dealing with topics such as the militarization of urban space: sound. Every time I write about sound used as weapon, I go back to the biblical example of the battle of Jericho (see past article) that describes the fortress walls of the city being destroyed by the trumpets of the Hebrews. Whether this story actually occurred this way or not, we should keep from it the idea that sound is not any less material than a wall or a body. The experience we have of sound is commonly accepted as immaterial, as if sound was a superimposed reality onto the realm of physicality. Sound constitutes however material waves that we usually perceive through the vibration of our ear drum, but the experience of low frequencies — the bass system at a James Blake concert for example — can also be done through the entire body as the vibrations are more intense.

Such a capacity to affect bodies could not possibly not be weaponized in various forms. An example already quoted on the Funambulist was the US Army siege on the Vatican Embassy where ex-dictator of Panama, Manuel Noriega took refuge when the Americans invaded the country in 1989 (see past article about sieges on embassies). The tactic used by the US Army consisted in surrounding the embassy with a powerful sound system, and play loud music through it until Noriega surrendered from exhaustion. Such example constitutes a sonic torture at large scale that was re-applied later at a more individualized scale in the various detention centers of the so-called “war on terror” in Afghanistan, Iraq, and Guantanamo Bay: detainees would be kept in a room while continuously suffering from extremely loud music.

Torturing through music constitutes however an improper tool for the military, since music was not designed in order to reach thresholds of pain for the listener’s body. Only the volume of the music — as well as the psychological damage triggered by repetition — can embody a weapon. Sound can however be designed in order to precisely reach the militarized purpose that is seeked through it. This is how the US Army and some police departments of North America owns sound cannons (long range acoustic device) that are able to non only focus the weaponized sound to specific targets, but the sound itself is using frequencies that are known to trigger pain for the human body. These cannons were used in particular during the 2009 G20 by the Pittsburgh police department as many videos witnessed. The question of frequency is so crucial that a sound weapon called the “mosquito alarm” has been created in such a way that only affect bodies approximately younger than 25 years old. Both in the case of the long range acoustic device and the mosquito alarm, it is important to note that their producers are private corporations.

Another private corporation involved in the militarization use of sound is ShotSpotter, which provides to American cities, a set of urban microphones triggered by the detonation of a gun. The coordination of the multiple microphones having recorded the detonation allows the geolocalization of the gun itself, and thus facilitate the intervention of the police. Video surveillance cameras are thus not the only electronic devices that populate cities to reconstitute the narrative of a crime, these microphones are furtively set up on rooftops, poles and traffic lights, ready to record data. The material wave of sound is not directly weaponized here, it is collected, analyzed and interpreted in a more global strategy of the militarization of urban public space, as the three friends of Demilit showed me during our walk in downtown Oakland for Archipelago a few weeks ago.

As always when it comes to the weaponization of a material phenomena, similar techniques can be used by non-institutionalized actors in resistance against militarization or simply indifferently from it. The rather striking bass artifacts created by Berlin-based artist Nik Nowak (see first picture) are not specifically designed for this purpose — the frequencies that they reach are not, as such, triggering bodily pain — yet, their aesthetics of a martial mobility certainly suggest such a use. Furthermore, the artistic manifesto dramatized here constitutes an invitation to appropriate our surrounding sound, i.e. our surrounding materiality, which is at the base of all political struggle. If we accept to interpret sound for what it is (the continous movement of matter), we can begin undertaking designs of it to serve our own political manifestos.