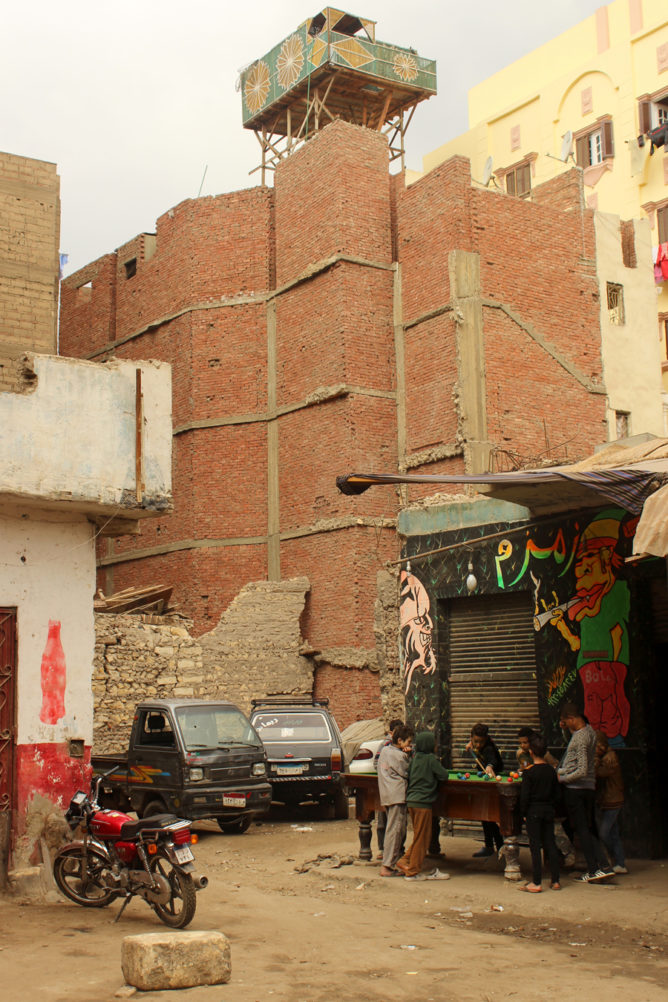 Léopold Lambert – Paris on May 4, 2015
If you enjoy articles of the blog, have a look at The Funambulist Magazine!

Originally written for Mohamed el-Shahed and published on Cairobserver

How difficult it is to write about a city you barely know but that had a great impact on you! Jumping to conclusions, romanticizing what we see, thinking that we understood something, the risks are multiple. Rather, what traveling allows is to get to know that we fundamentally do not know: we refine our ignorance, somehow. In this process of refining, I would like to thank the people who took the time to talk to me, and thus enriched my mesmerized eyes with some important contextual information: May al-Ibrashy, Beth Stryker, Omar Nagati, Manar Moursi, David Puig, Ahmad Borham, Azza Ezzat, AbdulRahman el-Taliawi, Nermin Essam El-Sherif, Salma Belal, Heba Raouf Ezzat, AbdelRahman Hegazi, Ramy Zeid, René Boer and, of course, Mohamed el-Shahed.

(all photographs by Léopold Lambert, February 2015)

I currently live in Paris, a city that seems all dedicated to frame the void of its streets. Cairo, on the other hand, appears as a city of objects, whatever their size. Each of these objects tells stories to whoever is ready to listen. Among them, Ping-Pong and pool tables that we regularly encounter in the small streets of Old Cairo are certainly some of the most candid ones. Manar Moursi and David Puig dedicated their research to others: the multitude of street chairs of the city. Looking at their careful inventory, we observe the ingenious transformations and repairs, simultaneously rough and sophisticated of the ubiquitous monobloc chairs and other recognizable models. But we can go beyond the simple physicality of the object itself, where we find the practice of the city it allows. As Manar describes herself, the fact of being a single woman navigating in a space ‘guarded’ by panoptical men, rendered the very act of sitting a non-innocent one at the political level. It is also difficult not to notice that most people sitting in the streets of Cairo happen to be men, and that the sociality described above tends to be only a male homo-social one. In this sense, the act of sitting often equals the reach for a position of power towards other bodies navigating the city.

Never too far from the chairs are the objects that are being fabricated and transformed. Over here, you can count multiple craft workshops fabricating glasses lenses, a bit further, people are using straw to stuff sofa cushions, then, further again, the car repair shops are everywhere. Fluxes of objects are continuous in these small streets. Raw materials enter the workshops while final objects leave them. Inside, the object is just a malleable matter formed into its final crystallized aspect. Some of them easily recount the way they have been created, some others are more sibylline. Although the threshold of a workshop cannot be crossed innocently, all doors are open and the craft activity often overflows into the space of the street itself. With an appropriate smile, the craftsmen will show you what they are doing, inscribing narrative layers into objects that will soon populate the rest of the city.

Objects are easily weaponized and no one is better at this than the military. The heavy concrete barricades that block several streets of the city in an effort to include only authorized bodies in governmental neighborhoods are certainly an evocative example of such a practice. The militarization of the city cannot merely be accomplished through the military body’s presence. It also requires an agency of objects at various scales in order to implement itself and controls the daily function of the city. Barbed wire, road obstacles, movable fences, permanent ones, concrete blocks, opaque walls are many instance of such a militarized agency of the city space. All dedicate their violent physicality to the organization of bodies in space: a few bodies are granted their protection while others are subjected to their other side, the exclusionary one.

In this militarized landscape, another object becomes a weapon, or at least, is considered as one: the camera. This singular portable object is not an extroverted one, it does not throw projectiles outside of its body; yet it aims, targets and captures and, as such, is considered by the paranoid security forces as a danger. Fixing an image of something offered to anyone’s eyes cannot be left unpunished and, at best, the photos will be forcefully deleted. Security forces are fundamentally iconoclasts: they fathom the power of representation and fear its ability to tell stories, and illustrate their weaknesses. The militarized city thus refuses to be represented: just like the architectural drawings that designed it will automatically acquire the status of state secret, any form of representation capable to crystallize a vision of it is considered as a threat to its very integrity. In this regard, the camera, this banal object of the tourist age, suddenly embraces its weaponized characteristics.

Cairo also likes to populate its roof with unique objects: informal dwellings, debris, garbage, antennas, billboards, sofas, plants, laundry, minarets and other bell towers, leather drying structure, pigeon cabins, etc. One of my favorite activity in my short stay in the city consisted in entering any building and climbing up the stair to the roof, sometimes having to use a bit of acrobatics to succeed. Once up there, we might wonder if the ‘real’ ground of the city would not be this roof surface, the streets under being canyons excavated by its inhabitants. The fragile-looking pigeon cabins that give Cairo its uniqueness could then appear as the primitive houses of this ground, from where the rest of the city has been built. Such an idea tells us that the stories that objects recount should not be elevated to the rank of truth. Through these narratives, we construct an understanding of the city and its practice, which, in turn influence our own practice of the city. In the case of Cairo, the multitude of objects that populate the city – much more than any Western city – certainly make our understanding more complex to construct. Nevertheless, it also enriches it through the infinite number of narratives that can be excavated from the surface of these objects and their interaction with the bodies around them.